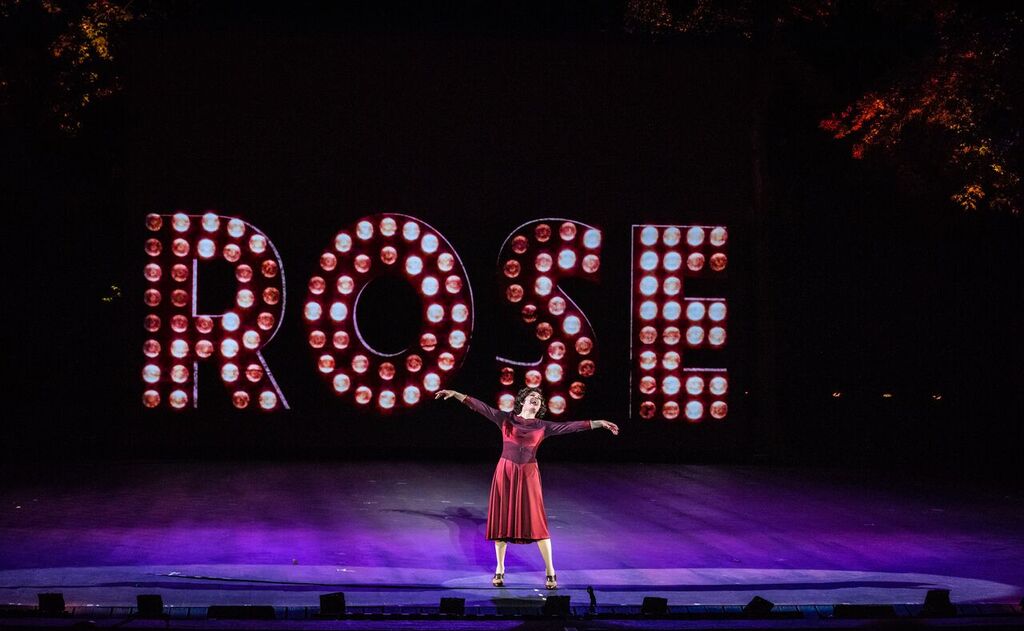 One doesn’t often think of storytelling as a hallmark of a musical. Though the story is important, it is generally the conduit by which the audience travels from song to song. “Gypsy,” the Muny’s current production starring the always-captivating Beth Leavel, is a spectacular exception to that generality. The show, which begins in the waning days of vaudeville and the Great Depression, introduces us to the indomitable force of nature that is Momma Rose, a woman determined to make her daughter a star. The story unfolds in song and dance, but the moments between the numbers are equally important as the show expertly weaves the elements together in a moving tale of ambition and unlikely success.

A single mom, Rose devotes all her time and attention to daughters June and Louise, and she will do almost anything to push their careers along. She’s loud, brash and presumptuous, with a cruel tongue backed by a demanding nature. Rose sees her youngest daughter June, with her blonde hair, blue eyes and squeaky voice, as a star on the rise and believes she’s the only one who can secure June’s spot in the firmament. Older daughter Louise is relegated to the chorus Rose has assembled to support June and to creating costumes for the small troupe.

When June runs away with one of the dancers, Momma Rose suddenly changes her opinion and swiftly shifts her attention and energies to Louise. But vaudeville is dying and the act is eventually forced to find bookings at a burlesque theater. Just as Rose is about to give up hope and retire the show, she learns that the star of the burlesque cannot perform and thrusts the shy Louise into the spotlight. After a hesitant beginning, Louise’s career takes off and she earns international acclaim under her better known pseudonym: Gypsy Rose Lee.

The performer’s memoir is told through a mix of drama and song and propelled by the indefatigable spirit of Rose as personified in a remarkable performance by Leavel. Rose may be pushy and brash, but she’s not unlikeable. From the driving “Some People” to the humorous “Mr. Goldstone” and the signature “Everything’s Coming Up Roses,” Leavel hits all the right notes. She easily captures the tyranny and tenderness of the character and leaves the crowd breathless with admiration after her finale “Rose’s Turn.” Rose is not an inherently sympathetic character, but Leavel refuses to make her a caricature and she and director Rob Ruggiero make choices that benefit the storytelling and ensure the audience cares what happens. There’s a sense of desperation to the character, but it’s genuine and hopeful in a way that resonates with the audience.

Julia Knitel is heartbreaking and evocative in a star-making performance as Louise. Eager to please and desperate for affection, her “Little Lamb” is a singularly stunning reverie that wraps the audience with a warm melancholy. “If Momma Was Married,” her duet with Hayley Podschun’s June, is thoroughly entertaining and the moment she finally stands up to Momma and embraces her burlesque persona is satisfying on multiple levels. Knitel and Leavel fill the theater with electricity that carries through to “The Strip,” as Knitel expertly captures the tease, and her sultry reprise of “Let Me Entertain You” is at once pure and sensual.

Adam Heller, as Herbie, Rose’s longtime love and the girls’ manager, is essential in ensuring the audience cares about this story, and his performance completely engages. Heller is kind and effecting as the beleaguered Herbie and his gentle baritone finds a solid harmonic balance with Leavel. Their duet “Small World” is a sweetly turned ballad that shows Rose’s tender side, if only a glimpse. Drew Redington shines in his moment in the spotlight as Tulsa, a member of June’s chorus who sings, dances and steals the young girl’s heart. Lara Teeter, Amelie Lock, Elise Edwards, Jennifer Cody, Ellen Harvey and Ann Harada stand out among the talented ensemble, with Cody, Harvey and Harada taking particularly humorous turns as the burlesque dancers.

“Gypsy” gets off to a rousing start with a swinging and up tempo overture and musical direction by James Moore that mirrors the energy and emotional range of the show. Luke Cantarella’s stage design, enhanced with a compelling video design by Nathan W. Scheuer, quickly transitions the multiple locations of the show and the traveling scene and final burlesque stage are stand out moments. John Lasiter’s lighting design, John Shivers and David Patridge’s sound design and artful if sometimes purposefully exaggerated costumes by Amy Clark add the finishing touches, creating a richly decorated tableau that supports the period and the story.

The tale of an overbearing stage mom and the price she pays to ensure her daughter’s stardom is thoroughly engrossing and the performances are simply spectacular. The production excels, hitting multiple emotional and musical levels and encouraging the audience to hang on for the ride, even when the road feels a bit more like a rollercoaster. The result is stunningly effective storytelling wrapped in a completely entertaining musical. “Gypsy,” continuing through August 2 at the Muny, stands the test of time. With a touching reconciliation as its conclusion, the musical sends audiences home on a hopeful note, with a tune in their head and a warm smile on their hearts.