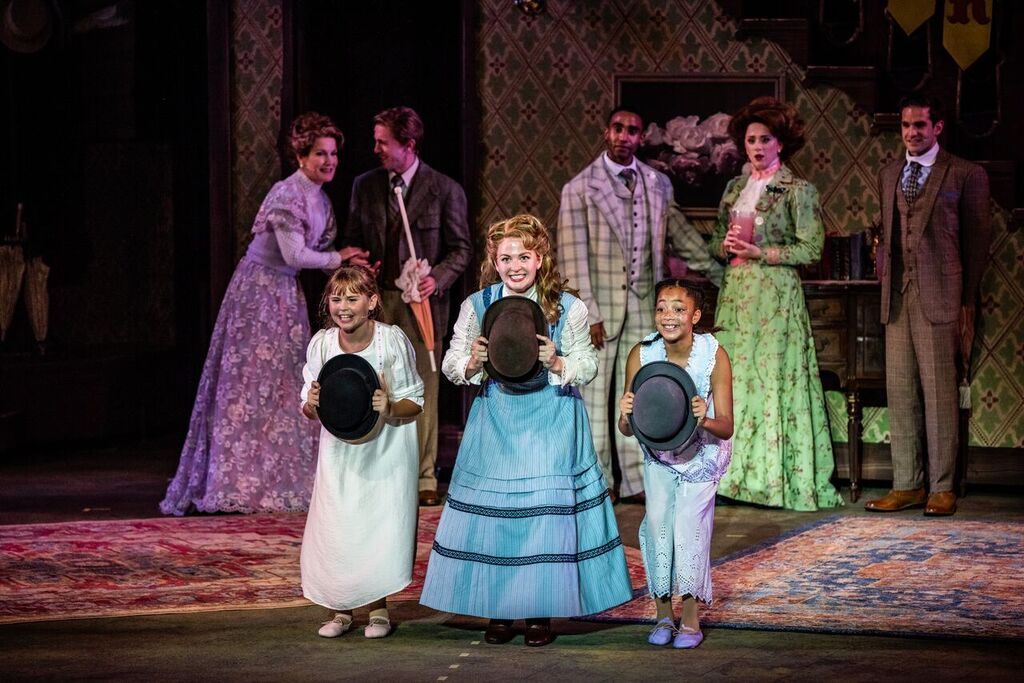 ‘Meet Me in St. Louis’ is a gloriously fitting finale for a celebratory Muny season

I honestly cannot imagine a better musical choice to close the Muny’s centennial season than the family friendly, crowd-pleasing “Meet Me in St. Louis.” With a heartwarming story about family and the place we call home that’s boosted by beloved songs, romance and adorably precocious children, the show is a natural fit for the Muny. Add in the fact that the show is set in St. Louis, the fairgrounds are the very grounds on which the Muny was built, and the musical adaptation of the original movie premiered here in 1960, and it’s selection seems all the more appropriate.

The story is centered on the lives of Anna and Alonzo Smith, their five children, Anna’s father and Katie, the maid and Anna’s confidant. Comfortably affluent and settled in St. Louis at the beginning of the 20th century, their world is shaken up when Alonzo is offered the opportunity to open and run a new office for his firm in New York City. He’s simply trying to provide for his family, but mom Anna is not convinced that a move and more money is really what they need. The family drama is heightened by the bustle and preparations for the 1904 World’s Fair in St. Louis as well as multiple romances involving the three eldest children, Rose, Lon and Esther.

Erin Dilly, as Anna Smith, and Kathy Fitzgerald, as Katie, are our guides through the revised story, acting as touch points and weaving the show’s various threads together. Emily Walton, as Esther, is still significant. She and Liana Hunt, as Rose, carry the majority of the romantic plot as well as conveying the sense of possibility that permeates the musical. Stephen R. Buntrock as Alonzo, Ken Page as Grandpa Prophater, Elena Adams as Tootie, Elle Wesley as Agnes, Jonathan Burke as Lon, Dan DeLuca as John Truitt, Madison Johnson as Lucille Ballard, and Michael Burrell as Warren Sheffield round out the named characters, while Ben Nordstrom, Jeff Jordan and a sharp ensemble featuring dance captain Emma Gassett provide support that adds to the warmth and humor of the story.

Walton has a beautifully rich voice that artfully captures the emotion required for each song, and she’s spirited while deftly handling Esther’s youthful mood swings. Her voice easily hits the required range and her numbers with Hunt and DeLuca sparkle with pleasant harmonies. Her scenes with sisters Hunt, Adams and Wesley are particularly delightful, and she and Dilly are effective as mother and daughter. Their heart-to-heart conversation is a surprisingly touching and real moment in the show.

Fitzgerald, Dilly and Buntrock have strong clear voices and great camaraderie as the adults in the show. Married in their offstage life, Dilly and Buntrock bring natural chemistry and affection to their roles that’s amplified by Walton, Page, Hunt, Adams, Wesley and Burke, creating a picture of connection and love one hopes to find in a family. Naturally, the irrepressible Adams and enthusiastic Wesley, with Page’s Grandpa as their doting accomplice, steal a number of scenes as Tootie and Agnes. While DeLuca’s singing voice is not quite on par with the other principles, he has an authentic, earnest tone and a winning demeanor that ensures he’s amiable and sympathetic.

What really takes "Meet Me in St. Louis" over the top, however, is Gordon Greenberg’s more fully developed characters and incorporation of the city in the updated book, which is enhanced by the attention to detail of director Marcia Milgrom Dodge and her creative team. Choreographer Josh Walden charms with referential dance steps and precise ensemble pieces, and the scene at the Christmas Ball shows Walden also knows how to add a comic touch without detracting from the story. Tristan Raines’ costume design feels right on period, and Rob Denton’s lighting design and John Shivers and David Patridge’s sound design help direct focus while adding texture and warmth to the story.

Clever elements in Michael Schweikardt’s stage design, like a cut out that allows the family’s porch to remain in scenes inside and outside of the house, even when the stage wall is closed, and the magnificent use of the turntable, connect each scene. Matthew Young’s video projections, which include archival footage and signage from the 1904 World’s Fair, add the finishing touch. These elements may not have the same impact when the show is produced elsewhere, but they are profoundly resonant at the Muny in Forest Park.

An outstanding and appealing cast and heartfelt performances, plus a refreshed book by Greenberg, keep the story between the songs interesting, while new orchestrations by St. Louis native John McDaniel give the score a bright polish. Reprises of “The Boy Next Door,” “Boys and Girls Like You and Me” and “Meet Me in St. Louis” are thoughtfully integrated and “Drunk Song,” “Under the Bamboo Tree” and “Under the Anheuser Bush” ring with just the right amount of comedy.

Under the skillful and clear direction of Dodge, the show feels more fleshed out, adding meaning and interesting content that enlivens the musical. Esther is still the pivotal character and Walton shines, providing beautiful interpretations of “The Boy Next Door,” “The Trolley Song” and “Have Yourself a Merry Little Christmas” that linger with wistful longings and determined hopefulness.

From the opening overture to the big finale at the Louisiana Purchase Exposition, “Meet Me in St. Louis,” continuing through August 12, is a fabulously nostalgic look at our city’s history. Heartfelt and appropriately motivated performances complemented with memorable songs are the centerpiece of a lovely confection that provides the perfect finishing treat to a celebratory season.