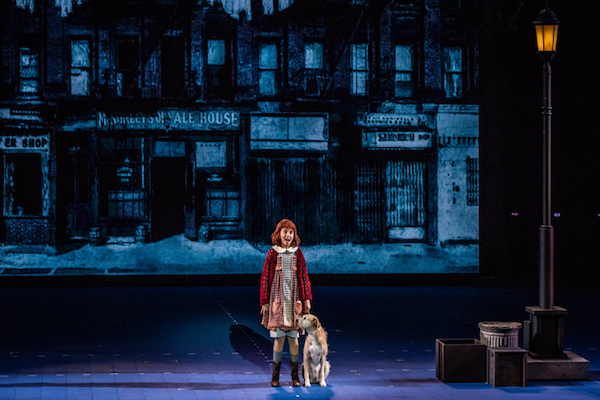 The Return of Annie

Annie was back at The Muny recently. She shows up every five years or so. And why not? Thomas Meehan crafted a dramatically satisfying book out of the venerable comic strip. Musical theatre audiences love Charles Strouse's music and Martin Charnin's lyrics. Some, I'm told, are even fond of that earworm “Tomorrow."

2009 was the last time the Muny did “Annie,” an unusually large gap for this popular piece. Also back from that time this time was Abigail Isom, who played Annie then. Now she's the Star-to-Be, the young woman just off the bus on Broadway, bursting with hope and talent. She more than held up the honor of her family's theatrical dynasty.

Annie this time was Peyton Ella, an experienced thespian with a strong voice and solid acting chops. Ana McAlister took full advantage of the sure-fire role of Molly, the smallest and mouthiest of the orphans. Jennifer Simard's Miss Hanigan left little scenery unchewed. Fun, but it didn't work as well with the orphans as it did with her brother Rooster and his girl Lily St. Regis. Jon Rua and Holly Ann Butler made up that trio with Simard, and choreographer Jessica Hartmann gave them plenty of the old show-biz razz-ma-tazz as they dreamed of Easy Street.

Christopher Sieber made Oliver Warbucks very human in the best way, and he made me less queasy than usual when he sang  – he has a very fine voice – “Something Was Missing” to Annie. Beautiful Britney Coleman's Grace Farrell stayed a step ahead of her employer Mr. Warbucks, and of everyone else she dealt with. For the Christmas party, she wore a stunning formal dress. She and the dress both made each other look good.

St. Louis stalwarts Whit Reichert, as bad cop and good butler, and Rich Pisarkiewicz selling apples in the Depression, making sound effects on the radio, and joining FDR's cabinet, crafted their work well, as did John Scherer, who almost sounded like FDR.

Michael Schweikerdt's sets looked a little skimpy early on, but Warbuck's abode was quite splendid, with help from Rob Denton's video design. Costumes by Leon Dobkowksi, lights by Nathan W. Scheuer, and sound design by John Shivers and David Patridge all brought period and place to life. Music director Colin Welford's overture especially had the sound of '20s and '30s popular music. And John Tartaglia returned to the Muny to give “Annie” his personal touch.