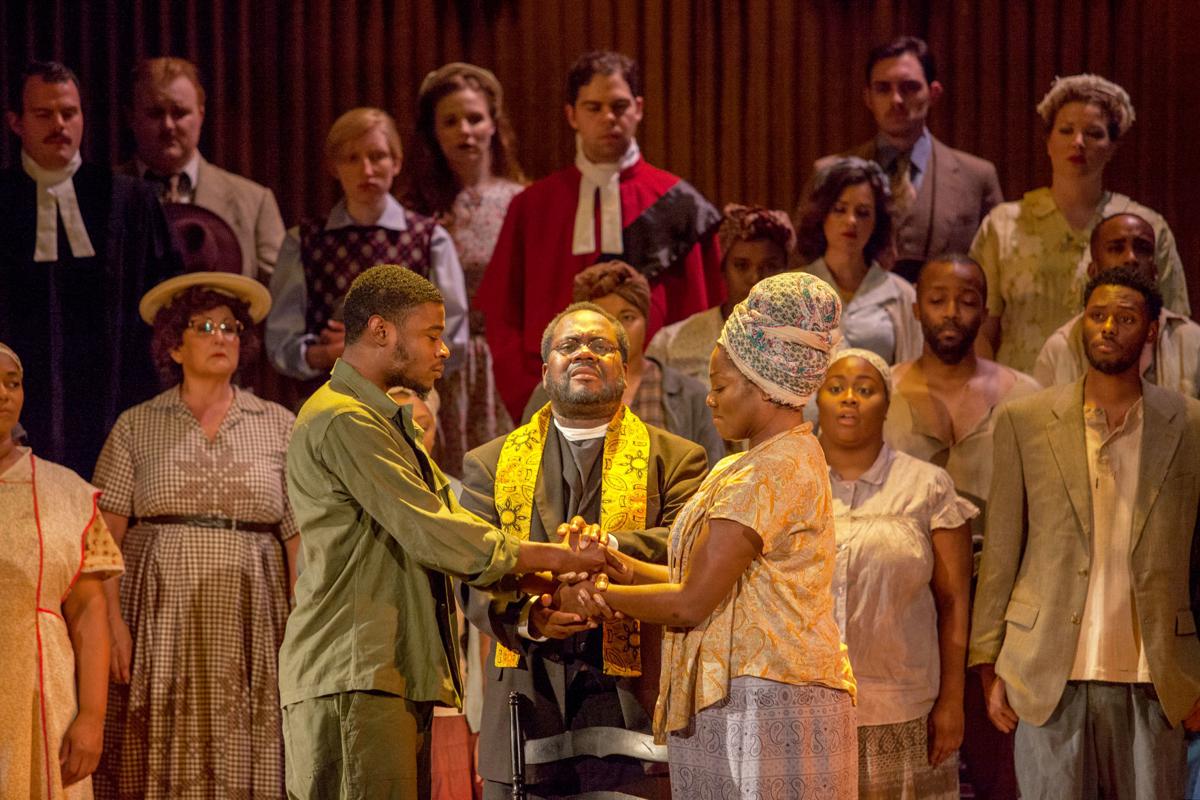 ‘Lost in the Stars’ combines opera and drama to tell a powerful, expertly wrought story

Union Avenue Opera closes its season with Kurt Weil’s stunning take on “Cry, the Beloved Country,” the novel by Alan Paton that recounts the early days of the anti-apartheid movement in South Africa. Set in the 1940s, “Lost in the Stars” is filled with lush songs, spiritual choruses and more than a touch of the blues, effectively telling the story through a mix of song and acting.

Kenneth Overton and Jeanitta Perkins are the Anglican priest Stephen Kumalo and his wife Grace, parents of Myke Andrews’ Absalom, and the central figures in a drama that explores our collective feelings about family, race, poverty and equality. Living and serving a small rural town, the family faces daily prejudice and a dire economy that has driven the son to the city, along with his uncle and cousin. Here he seeks work and finds temptation as well as love. His father eventually comes looking for him, but life takes a dark turn before the two men are reunited. This is not a happy tale, but it is beautiful in its gravitas and depth.

Overton, a rich, distinct baritone, has the most demanding role in terms of singing and acting, and he handles each aspect with commanding finesse. Mezzo-sopranos Kristy Swann, as Absalom’s love interest Irina, Melody Wilson, as rooming house proprietor Linda, and tenor Roderick George, as the chorus Leader, standout among an outstanding vocal ensemble. They guide the show, providing a magnified reflection of the heartbreaking stories that unfold. The acting is no less demanding, however the period necessitates a different expression and intensity while the music provides the freedom to mine the emotional depths.

In addition to the evocative score, the production includes a dense book that requires considerable skill to portray, and the opera wisely adds some of St. Louis’ most familiar and talented actors in key dramatic roles. In addition to Perkins and Andrews, Reginald Pierre, Carl Overly, Jr., Abraham Shaw, Stephen Peirick, Evan Adams, Chuck Lavazzi and Tim Schall deliver moving performances that deftly establish the boundaries and rules of the layered story. Sherrod Murff and Charlie Mathis add the final touch to a strong cast as the next generation of South Africans. Their budding friendship is genuinely compelling and hopeful.

The acting and singing are nicely integrated, with seamless shifts that make the production feel more akin to musical theater than traditional opera and the story easy to follow. The songs are in English and, while the more contemporary approach may not please everyone, the show is engaging and accessible, a less intimidating opera. Incorporation of blues riffs and lighter, more actively paced numbers strips some of the pretense that often accompanies opera. There are no grand arias just wrenching and sincere movements, such as Swann’s “Trouble Man” and Overton’s “Oh Tixo, Tixo Help Me.” This makes for a less impressive score but helps the story and music balance, creating a more fully realized show that will leave some wanting more vocal drama.

The music isn’t simple as Overton and Swann, in particular, demonstrate, and numbers, such as Wilson’s innuendo laced and swinging “Who’ll Buy” and Murff’s winning “Big Mole,” that add levity belying the serious issues they cover. The title song “Lost in the Stars” and “Stay Well” have a popular, Broadway musical feel despite their considerable vocal demands and many of the chorus numbers, including “The Hills of Ixopo,” “Murder in Parkwood,” “Fear” and “Cry, the Beloved Country” have a distinct gospel influence, George leads with confidence and his bright tenor is an anchor for the audience.

The set, designed by Roger Speidel, is purposefully simple. Rusted tin walls and unfinished wooden beams, with an occasional light projection, are accented by portable pieces that the company carries on and off without drawing notice. The transitions are as interwoven in the opera as the acting and director Shawn Patrick Tubbs conducts the large ensemble and principals with the same fluency as conductor Scott Schoonover directs the fine orchestra. Joe Clapper’s lighting enhances both the mood and sense of place while Teresa Doggett’s costumes emphasize culture, period and status in an understated way that adds to our understanding of the characters and stories. Finally, Kurt Weill mentor Tazewell Thompson added insight and perspective that helped to shape the heart wrenching opera.

The story is the focus of the opera, and Weill and book and lyricist Maxwell Anderson have woven a sad and satisfying tale in a way that compels the audience to really listen, though the mix of styles may not be for everyone’s taste. The combination of excellent operatic voices and top-tier actors creates a performance that is completely engaging and accessible, ensuring “Lost in the Stars,” running through August 25, is a memorable and finely tuned production.