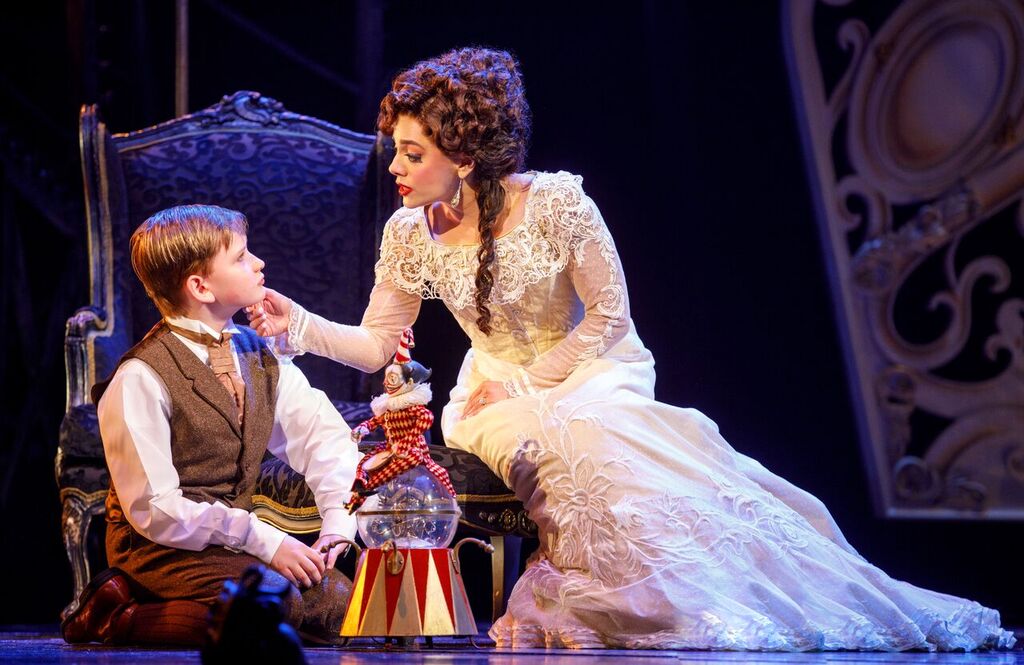 “Love Never Dies,” the sequel to one of the stalwarts of contemporary musical theater, “The Phantom of the Opera,” makes its St. Louis premier in a dazzling production that mixes an ambitious, lightly operatic score with a visual feast. The show thoroughly entertains, but fails to capture the spark and romance of the moody original.

At one point during the extravagantly theatrical musical, the Phantom says that the world he’s created – a lavishly decorated vaudevillian circus of the unusual and exotic – is a place where “music and beauty and artifice reign.” The phrase is a lovely summary of the captivating, if significantly less substantial, new work by Andrew Lloyd Webber, with a book by Ben Elton and lyrics by Glen Slater with additional lyrics by Charles Hart. The story is uneven and the characters thin, but the show is nonetheless quite enjoyable. Infused with a macabre, steam punk sensibility, fresh dancing and engaging vocal and musical compositions the show is confidently guided by director Simon Phillips and music director Dale Rieling.

The densely packed musical features key characters from the original, ensuring the audience reacquaints itself with the story. Unfortunately, things don’t quite come together in the transparent plot, and some audience members will no doubt be left wanting. The production values are high, but the story and songs feel incomplete and a bit uneven, resulting in an engrossing but somewhat unsatisfying show.

The story picks up ten years after the original’s conclusion. The Phantom, along with Madame Giry and Meg, have a successful act on Coney Island, but the Phantom longs to compose and is haunted by his memories of Christine Daaé. News comes that the soprano, along with husband Raoul and son Gustave, is on her way to New York and coming out of retirement to open Mr. Hammerstein’s new opera house.

The Phantom sends his ringmasters to spirit the family to him, playing on the family’s emotions and financial need to get Christine to perform his work, for him, again. As much as he may be driven by passion, the Phantom proves self-centered and obsessive, adding emotional dissonance to the lingering affection he and Christine share. Unspoken secrets, bittersweet heartbreak and tenuous hope are exchanged among the many characters as they reunite, singing songs filled with melancholy and longing that lead to a surprising conclusion.

Bronson Norris Murphy as the Phantom, Meghan Picerno as Christine and Jake Heston Miller, sharing the role of Gustave with Christian Harmston, are the critical triangle central to the show and each turns in a strong performance with excellent vocals. Murphy is rich and clear and fundamentally resonant, using his long, lean stature to command the stage and showing finesse as he navigates through a confusingly changeable character. Murphy seamlessly shifts from sympathetic to vengeful to obsessive and a host of conflictions, but the transitions are too abrupt and suffer from poor writing.

Picerno is clearly comfortable in her operatic voice and she earnestly buys into the thin plot, by the second act she is fully connected to the character and audience. She tugs at your heartstrings and uses expression to convey a sense of confusion though, again, the script fails to develop her character. Picerno and Murphy compensate with good chemistry and vocal range. There’s a quality to her voice that fills the air with presence and is mirrored by the younger Miller. His voice is plaintive and effortlessly wide ranging, with a male soprano that rings like a bell.

Mary Michael Patterson as Meg and Sean Thompson as Raoul are more sympathetic than perhaps written, but it works to add interest, while Karen Mason is as severe as ever as Madame Giry.  The characters are integral to the continuing story and director Phillips and the cast work to add interest. Unfortunately, they are not given much to work with and some aspects of their characters, particularly Raoul’s, feel distinctly incongruent with the original. Katrina Kemp, Stephen Petrovich and Richard Koons add much to the entertainment as the prancing, dancing and congenial ringmasters of the Coney Island show while directing audience attention during scene transitions. The three are central to an alternate reality that serves as the backdrop for the show and is captivating but inconsequential to the story.

Choreographer Graeme Murphy AO ensures the large ensemble numbers integrate stilt walkers, gymnastics and other circus acts in complex, entertaining numbers and the show is a mix of continuous movement and changing scenery. The set design and costumes, by Gabriela Tylesova, create a kaleidoscopic world that’s delightful to watch but clearly a marked departure from everyday reality. There is, in fact, a sense of a fantastic dreamland to the show that starkly contrasts the reality of the working opera in the original. A sense of hyper real permeates the show to the degree that “Love Never Dies” could arguably be framed as a disturbing nightmare of Christine’s – which may be a comfort to those disappointed in the resolution.

The story is thin and the score lacks an apparent standout hit song, this is not Webber’s finest work, but the execution is stunning and the spectacle eccentric and electric. The next chapter doesn’t always sit well with the previous version, calling to question assumptions from the original, and I dare say some will be quite disappointed by the story’s twists and turns.

The challenging songs have the feel of light opera, referencing the original score in haunting snippets and smartly bent melodies during several numbers and the execution is nearly flawless. The result is a musical that doesn’t quite stir the senses so much as it invites the audience to float through the exquisitely dreamy atmosphere. Fans of the original and theatregoers looking for an unexpected visual treat are sure to embrace “Love Never Dies,” continuing through September 30 at the Fabulous Fox Theatre.