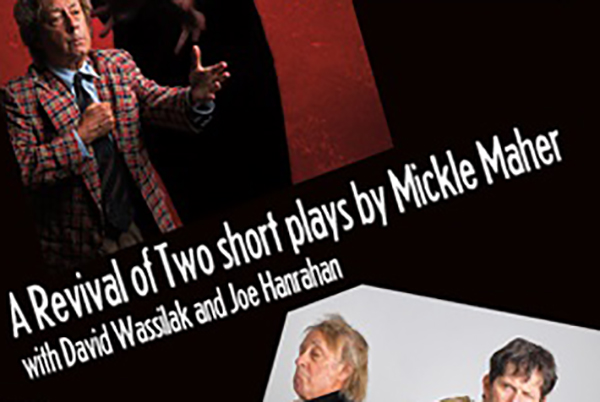 'An Apology … By Doctor Faustus' and 'The Hunchback Variations'

For nearly 20 years the Midnight Company has been serving up small, intriguing  evenings of theater.  These evenings can be wildly comic or intensely serious or strangely haunting – but they are usually deeply engaging. And they usually feature plays that are far off the beaten track. Midnight productions are often one-man performances by artistic director Joe Hanrahan, who is a gifted teller of tales.

Their current offering, now playing at the Monocle, is a double bill of brief pieces by Mickle Maher:

"An Apology for the Course and Outcome of Certain Events, Delivered by Doctor John Faustus" and "The Hunchback Variations."

Both pieces are revivals of earlier Midnight productions and both feature Hanrahan with David Wasilak who was co-founder of the company.

Mickle Maher, founder of Chicago’s Theater Oobleck, is a very poet – in the same sense that Samuel Beckett is a poet: i.e. truly and totally.  There is a deep sense of the music in language and of its theatrical effect; there is the gift of startling metaphor; there is piercing imagery; there is that wonderful efficiency. And there is the address of deep questions.

Faust, you recall, sold his soul to the devil in exchange for worldly powers and wisdom. Mephistopheles (Lucifer’s sales rep) became Faust’s servant. We pick up the story 24 years later – the “collection date” – when Faust must die and be damned to an eternity in hell. Hanrahan is Faust. He’s asked us here to apologize for ...  well, it’s not quite clear what he’s apologizing for.  Perhaps just for the fact that he’s done nothing at all significant or lasting with all the powers he purchased. Faust is generally rumpled (a look in which Hanrahan excels). He wears the world’s tackiest plaid sport-coat. Wasilak, lean, dark and sleek, wears pure black – perhaps velvet – and those ominous reflective black shades.

Faust rambles on about the various irritations that arise when you are trapped for 24 years living with a “servant” who really has power over you. There are repeated minor insubordinations– as in Mephistopheles’ continual habit of reading Faust’s journal – even though that journal consists only of page after page after page of tallying hash-marks. And the servant will call his master “Johnny.” We hear of their occasional time-travel, of a culture using a language in which there is only one word – but that word has a million syllables. At one point Faust passes out beer and potato chips to the audience.

Mephistopheles is a nearly silent role. He speaks only rarely and with terse articulation, but Wasilak projects a striking keen-ness and control.

To me, this piece, though not without delights, is rather pointless. It is simply a random walk through an original and, in fact, surrealistic imagination.

"The Hunchback Variations" is something altogether different. The format is that of a panel discussion. The panelists are Ludwig van Beethoven and Quasimodo. They sit before microphones. The topic is a long-term research project that the two have conducted. Each evening Beethoven would plod through the swamp to meet with Quasimodo in his wretched hut in the fens. Together they seek to create a notoriously impossible sound effect that Chekhov specifies in The Cherry Orchard:

“... as if coming from the sky, the sound of a breaking string.

It fades away sadly.”  (My preferred translation says “harp-string.”)

Of course Beethoven and Quasimodo were long dead before Chekhov wrote that play and of course Beethoven and Quasimodo were both stone deaf. But never mind that. In this surrealistic context these two explore a deep human question: Why, in the face of repeated and certain failure, do we continue to try? To try to achieve perfection? To try to attain the impossible? To merely communicate? Here Mickle Maher treads the same path as Beckett, whose shabby, seedy characters say, “I cant go on. I’ll go on.” Quasimodo, at least, wants nothing more than release from the urge to create.

Hanrahan, as Beethoven, manages to even look pretty much like Beethoven and Wasilak (apparently without prosthetics) presents a grotesquely distorted face. He wears the wreckage of spectacles – one lens messily covered with masking tape.

Frequently throughout the evening Quasimodo demonstrates their failed attempts: wind chimes, a slide whistle, a “fun alarm,” a cow-in-a-can, a ukulele, a whoopee cushion, a toy accordion, a kazoo.

The sketch comes to an end. And then starts over again (with different dialogue) – seven times.

Beethoven is enthusiastic and optimistic about the project, though he contributes only a single suggestion: the sound of the pages of Emily Dickenson’s collected poems riffled into the microphone. Quasimodo is far more deeply invested, and his final “goodbye to The Cherry Orchard” is profoundly moving. This is Wasilak’s very finest moment in all the many roles I’ve seen him play.

So it’s another fun, fascinating, unconventional evening with The Midnight Company.

The double-bill, "An Apology … by Doctor John Faustus" and "The Hunchback Variations," plays at The Monocle through September 29.