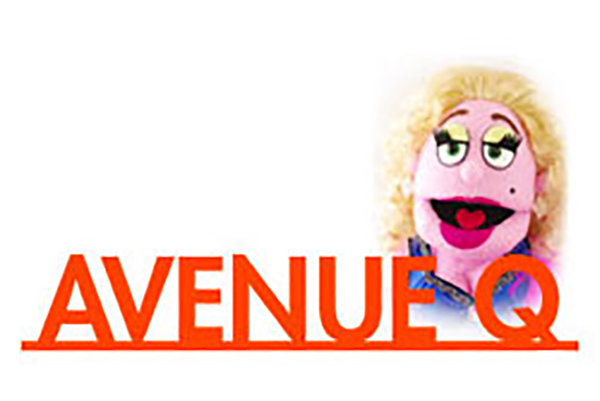 Can You Tell Me How to Get, How to Get to Avenue Q?

"Avenue Q," the winner of three TONY awards in 2004 – including Best Musical – is not a puppet production in which the human performers hide invisibly behind their alter-egos; here the puppet performers – with felt, fabric, and fur appendages – are in full view, adding three-dimensionality to their roles. Seen either alone with their puppets, or combined in scenes with human performers without puppets, I'm sure the rest of the audience, as I was, was easily able to accept this conceit.

I found the Meramec production of "Avenue Q," directed by Michelle Rebollo, to be very enjoyable. Friends of the performers in the audience regularly and loudly voiced their agreement. In the main, all the performers had strong acting skills, showing a lot of energy and enthusiasm in their roles. I felt very strong performances were turned in by Curtis Moeller as Rod, Kalen Riley as Nicky, and Travis Pfeifer as Trekkie Monster. The most fun, however, were Abby Cockerham and Madeline Finn as the Bad Idea Bears.

A musical with a very simple plot (life sucks in a soulless urban metropolis, but friends of all kinds can make it ALLLLLLL better), with a LOT of songs to fill it out (book by Dr. Jeff Whitty, music and lyrics by Robert Lopez and Jeff Marx), everyone in the cast sang well (musical direction by Dr. Jeffrey Myers) in their many puppet and human roles. It was also obvious a lot of work had gone into rehearsing manipulation of each of the puppet elements (heads, mouths, limbs on controlling rods, limbs controlled by live human hands) to make them appear as actual beings. This preparation paid off nicely.

Technically, the multi-level set was impressive, but also had some problems in that an on-stage video display was set so far back that only a central wedge of the audience could see it without obstruction, and a safety rail in front of it also impeded the view. Costumes and lighting supported the show nicely, and the orchestra was supportive but unobtrusive, exactly as they should have been. There did appear to be a few sound or mic problems in which words were difficult to understand, usually when the whole cast was singing at the same time.

That said, with much laughter, and yet pauses for reflection on the state of being us (even if we're not puppets), it was still a very enjoyable production.