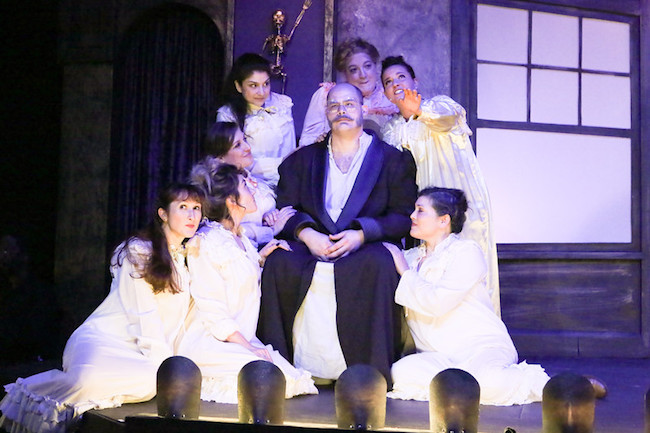 If you’re in the mood for theater that will make you laugh while still delivering the pleasure of a high quality score, you won’t want to miss New Line Theatre’s latest production. Reverently irreverent and witty, “Gilbert & Sullivan’s The Zombies of Penzance, or At Night Come the Flesh-Eaters” is a rollicking good time of a zombie musical continuing.

New Line hits all the right notes with an abundance of sharp, insidious comedy and a touch of political commentary. The world premiere combines the efforts of W.S. Gilbert and Scott Miller on book and lyrics and Arthur Sullivan and John Gerdes on music, with orchestrations by Gerdes. The clever show is a fast-paced satire that’s at times adroitly bookish and at times total fanboy – of Gilbert and Sullivan… and Romero. George A. Romero that is, the acknowledged patriarch of the modern zombie canon.

The show introduces us to a community of zombies living in close proximity to one of the world’s most famous, but currently retired, zombie killers, Major-General Stanley. Stanley is also father to a bevy of single daughters who have apparently been raised in near and devout seclusion. One afternoon, while on a long walk, the sisters and the amorous zombies cross paths. If you’re even vaguely aware of the work of Gilbert & Sullivan, or a fan of classic American cartoons, you won’t be disappointed in the way favorite comic tropes and familiar songs have been re-imagined and reshaped to the zombie storyline.

Sean Michael is Frederic, a recently turned zombie. He still has the longings and feelings of a human but with the cravings and pallor of a zombie, enabling him to fall head over heels in love with Melissa Felps as Mabel, one of the famous zombie killer’s attractive daughters. Mabel is clearly the more rebellious of the sisters and Frederic is soon swooning and pining over the comely lass. The two are a fun and beguiling couple with well-paired voices and chemistry, a musical amuse bouche that adds genuine sweetness to the story.

Zachary Allen Farmer is effortlessly superb as Major-General Stanley, his featured number “Modern Era Zombie Killer” alone is worth the ticket price, though it’s really the cherry (with sparklers ablaze) on the top of this delicious confection of a show. Farmer has the gravitas of a feared bounty hunter, but with a soft spot for his many daughters. His compelling tone and range work equally well solo, in chorus with his daughters and in duets with Dominic Windsor-Dowdy, who adds deft comic timing and smooth, rich vocals as the Zombie King.

The sisters have all the charm and harmony of the Von Trapp family – until they don’t.  They never go out of tune, mind you, but it turns out the girls are competent zombie killers themselves. Or at least they look the part. Christina Rios, Kimi Short and Lindsey Jones lead the sister chorus and are joined by Mara Bollini, Melanie Kozak, Sarah Porter and Felps. Each impresses with their vocal dexterity and range, with Rios particularly enjoyable in the more operatic sections.

In addition to Dowdy-Windsor, Kent Coffel, as Zombie Sam, leads the rest of the zombies, providing outstanding support and slightly exaggerated expressions that fit the wink and a nod style of the show. Robert Doyle, Matt Hill, Tim Kaniecki and Kyle Kelesoma round out the cast with lustful urges, a hunger for brains and more solid vocals. The sisters and zombie chorus romp through the aisles and gangways in the Marcelle Theater, a smart use of space by directors Miller and Mike Dowdy-Windsor.

In addition to the energetic staging, Rob Lippert’s lovely set evokes the era of Gilbert & Sullivan with painted backdrops that slide in and out of place in a proscenium frame topped with portraits of Queen Victoria and the aforementioned Romero. Kenneth Zinkl’s lighting and Ryan Day’s sound unobtrusively enhance the show while Porter’s well-conceived costume design features anachronisms and a few surprises, but keeps the sisters costumed in tradition, corsets and layers of petticoats.

There are plenty of “easter eggs” to discover in the well constructed and adroitly produced show, not the least of which is the integration of the Gilbert & Sullivan songbook with Gerdes and Miller’s alterations and additions. Music director and pianist Nicolas Valdez is clearly in-sync with Gerdes, who provides the French horn in the orchestra, and the singers on stage. There’s one musician for each instrument and a smallish cast for such big numbers, but the company pulls the grand effect off brilliantly.

From the first draw of bow across cello to the tongue-twisting lyrical runs, the songs thoroughly entertain. In addition to “Modern Era Zombie Killer,” “Eat Their Flesh,” “We’re Christian Girls,” “From Genesis to Revelation,” the second act medley “Now I Shall Prove My Love/When I Had Left Your Zombie Pack/Away, Away! My Heart’s On Fire” and “Sighing Softly to the River” are particularly memorable and well executed.

The character arcs and story borrow liberally from the source materials, but Miller livens things up with allegory, metaphor and a number of well-placed jabs at the zombie mythology and contemporary politics. The cast responds to the satirical reinvention of Gilbert & Sullivan with comic aplomb and vocal gymnastics that never fail to stick the landing. New Line Theatre’s “The Zombies of Penzance,” a delightfully fun, pointedly funny musical, continues through October 20th.