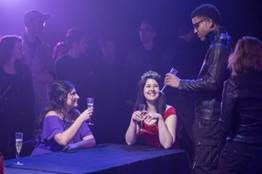 ‘Macbeth: Come Like Shadows’ is a brilliantly immersive and emotionally conflicted take on Shakespeare’s tale

Rebel and Misfits Productions takes audiences on an immersive journey through the dystopian ruins of a Scottish castle to present a version of Macbeth that’s drenched in color, music, sensuality and a more profoundly disturbed state-of-mind. Layered with sound, light, color and corners to explore, the show saturates the senses, even offering beverages and ritual to complete the sensory engagement.

The production is evocative, mesmerizing theatre with a cinematic scope and the pulsing beats of a fashion show, or music festival, held in a war torn country for dramatic effect. There are multiple times throughout the show when scenes are performed concurrently during the show, so each audience member’s experience will vary, depending on random occurrences and chosen paths.

After a short bus ride during which the laws of the land are spelled out, the audience is herded like refugees through a checkpoint and into the kingdom. Paperwork is check, documentation created, and wrists stamped with the rhythm of an efficient bureaucracy. Mysteriously dressed witches wander past, stopping to stare intently in an audience member’s eyes or guide them in muted, cautionary tones. Soldiers wander about, occasionally chatting with each other and guests, always scanning the room with a wary eye.

The audience is herded from the reception room, to the lounge and bar to the main performance space, but there they are free to wander about. Numerous characters walk amongst the crowd, speaking and occasionally drawing audience members into their space until, with a rush of movement and show of weapons, Macbeth, Banquo, the king and other soldiers arrive and the blood-soaked tale unfolds.

The story is familiar. Victorious in battle, Macbeth and the loyal Banquo are on their way home to prepare for the king’s visit when they hear the witches’ prophecy. Eager to ascend to power, Macbeth and his wife push their fortune forward with calculated and murderous intent. But for this retelling, the audience moves through the story, taking in differing scenes depending on their location and perspective, but always aware of the drama and tension surrounding them. At times, screams, shots and the sound of a scuffle can be heard from another space. At other times, characters in one scene are silent, but fully in scene, providing a visual contrast to the primary scene occurring nearby.

Co-directed by Sean Patrick Higgins and Kelly Hummert, who also portray Macbeth and Lady Macbeth, the production envelopes you as it delves into complex motivations and revels in all too brief moments of power and lust. The ensemble thoroughly comprehends the source material as well as the contemporary perspective and celebrity savvy of this production. The Macbeths are clearly a power couple, doing their best to remain in the spotlight as their country engages in a costly war. Lavish parties and well-managed photo opportunities weave their way into political and tactical battles, and the audience is witness to the machinations.

Higgins and Hummert are electric as the charismatic power couple. The tension between the two is intense, whether with lust, anger or shared thirst for the crown. They are fully complicit in their crimes and the moment when Macbeth tests Lady Macbeth’s loyalty as he hands her a knife is subtly shocking, and easily missed. Both actors show considerable emotional range. Higgins is resolute and politic, but his desperation becomes increasingly apparent as his façade crumbles. Hummert’s eventual breakdown is artfully foreshadowed by startling confessions and flashes of insecurity. She has a score of her own to settle with the king.

Shane Signorino is stoically honest and forthcoming as Banquo, but gleefully terrorizing to the newly crowned king as his ghost. Jeff Cummings gives the former king a smooth exterior with a slimy underbelly, while Paul Cereghino is sympathetic as his closeted son Malcolm. Cereghino’s rendition of the porter’s speech, while an untraditional portrayal, is a refreshingly free and easy scene in the complex but compelling story. Spencer Sickmann is a heartbreaking then cathartic rush of emotions as Macduff and Hailey Medrano proves a tragically true friend as Lady Macduff. Aarya Sara Locker, Patrice Foster, Reginald Pierre, Tielere Cheatem, Alison Linderer, Cynthia Pohlson, Phil Leveling, Kevin Corpuz and Jeremy Branson complete the excellent supporting cast and every member of the ensemble is fully committed to this production.

Jon Ontiveros takes advantage of the architecture in the expansive space with a gorgeous lighting design that underscores each emotional transition in the show, creating and obscuring shadows. Joe Novak’s sparse set creates the sense of private and public spaces, Eileen Engel’s costumes set status and position, and composer Adam Frick-Verdine and designer Sasha Gonzalez set the pace with a soundtrack that moves from ominous to trance to dance party and back again, with a little pomp and circumstance thrown in at key moments. The effect envelops you with the story and invites you in for the duration, and the bus ride back from the space becomes a welcome decompression, though you may ponder what you saw a bit longer.

“Macbeth: Come Like Shadows” will not please everyone. There are few seats in the performance space and the best way to experience the show is to move with the scenes. Good footwear and a warm jacket are recommended and your level of comfort with engagement will likely determine how close to the action you will choose to stand, but members of the ensemble will ensure you are out of harms way during any intense action or fighting scenes. The story is still the focus in this production, with an adaptation that reflects contemporary realities and stylistic choices. This is a media savvy and culturally aware Macbeth, for a generation that was raised being filmed by their parents (or perhaps doing the filming) and graduated to smartphones and social media. Current social commentary is also referenced. The king's heir is gay, a woman leads the military and several black and brown characters play key roles, but the majority of those in positions of wealth and power are white men. Even these casting choices seem to send a subtle but palpable message.

Familiarity with the story is helpful, particularly in moments when the cavernous cathedral swallows the sound, but the commitment and intensity of each actor and sharply focused intention ensure even the unfamiliar can follow this story of ambition, longing and murder. Rebel and Misfits production of “Macbeth: Come Like Shadows,” continuing through November 10, is a sensual and immersive theater wrapped in a juicy story of ambition and power. The show is powerful and effecting, a visceral experience that lures you in and then pushes you headlong into a story resonant with the pulse of contemporary America.