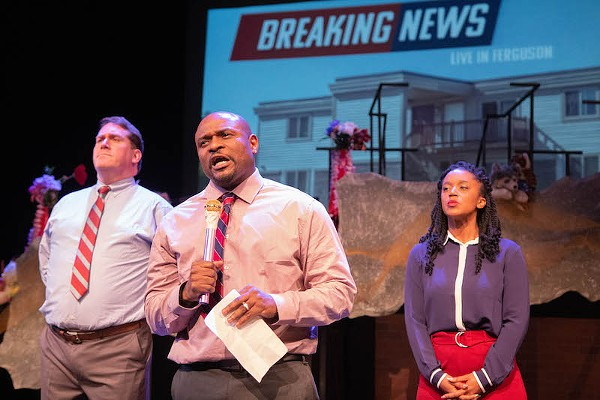 The Black Rep presents the world premier of Kristen Adele Calhoun and Michael Thomas Walker's moving story about the protests and unrest in Ferguson following the death of Michael Brown. Thoroughly engrossing and expertly produced, "Canfield Drive" is framed from an African American perspective, an important distinction in the canon of shows about race and equality in the United States.

The story is told primarily through the work and conversations of two reporters using Brown's death and the resulting protests to boost their professional profile. The reporters - Imani, an African American woman played with forceful conviction by Kristen Adele, and Brad, a middle class white man played with an easy certainty by Christopher Hickey - must navigate their personal response to the killing, protests, public outcry and grand jury decision while covering the events in real time. Naturally, the two come to the story with very disparate life experiences and points of view; the way they navigate both the unfolding events and their personal response is relevant, compelling theater.

"Canfield Drive" makes smart use of the busy newsroom to frame and focus the story of an event from which we're still feeling repercussions. Issues of fair treatment by the police and courts, respect of citizens of all racial and ethnic backgrounds, as well as the police, and community building as a response to tragedy resonate and remind audiences of the contentious conversations that followed every revelation. Michael Brown's shooting death was an incredible catalyst for these conversations; the script and director Ron Himes use the sharp focus of broadcast news to explore, not answer, while delivering an emotionally and dramatically compelling story.

The four actors in the ensemble – Adele, Hickey, Eric Conners and Amy Loui – play all the characters and most are distinct and well-articulated. Connors' anchorman wrestles for control of the news story with the two reporters while also trying to keep the peace. Loui is poignant as an allied artist and activist and blissfully well-meaning but clueless as a patriotic shopkeeper. It is somewhat unfortunate, but ultimately helpful, that the minor characters names are projected on the video screens. Though not as fully developed as the primary characters, they add texture and viewpoints to a complex local and national reaction.

Adele is captivating as reporter Imani Duncan. She's clearly connected and concerned about the community. But she's also dealing with her personal response, which is deeply angered and affected, and issues of self-care. Imani is the moral compass of the show and her character remains honest and sympathetic even as she faces an all-to-realistic health scare. Naturally, the revelation occurs at a critical juncture in the show. Adele ensures the character is believable even as she struggles to balance self-care with her desire to ensure Michael Brown's death doesn't become just another statistic.

Hickey is resolute and assured as Brad O'Connor, with a presumptive and unconsciously entitled attitude. He shares his opinion with a shrug of his shoulders and the confidence his words will not be questioned. His tone carries the air of authority so often displayed by those in positions of power as they dismiss and often blatantly patronize their audience. Hickey also surprises as Sarah Palin in a small but well turned moment.

The forced collegial chemistry between the reporters reveals its thin veneer. To the playwrights' credit, the script uses this opportunity to craft a less magical but critical change in each of the lead characters. Imani needs to find balance and the courage to use her voice; Brad needs to start listening, to take off his blinders of privilege and experience the world around him from someone else's perspective. A well-written scene involving a shared car ride speaks volumes and fundamentally shocks Brad from his comfortable state of denial. The moment reverberates with the blunt force of reality and the ensemble fully commits in an expertly turned scene. Some audience members will instantly recognize the tension, others may find the interaction foreign. But all will likely find the moment appropriately uncomfortable and disconcerting.

Multiple senses are engaged by the production, creating a sense of imbalance that permeates the show. The set is a stunning memorial bridge resembling the altar to Brown at the location where he was shot. Videos and newsreel footage from 2014 are effectively woven into the storyline, reminding audiences of the details and coverage experienced. But it's strong, firm direction by Himes and well crafted performances by the actors that bring the show to life.

The play is likely not the definitive script for the times, but "Canfield Drive," continuing through January 27 at The Black Rep, is relevant, contemporary theater that hits hard and reverberates long after the curtain closes. This reviewer would encourage theater goers seeking a better understanding of the history of race and privilege in the United States to see this show, particularly if you have seen or plan to see "Alabama Story" on the main stage at The Rep.