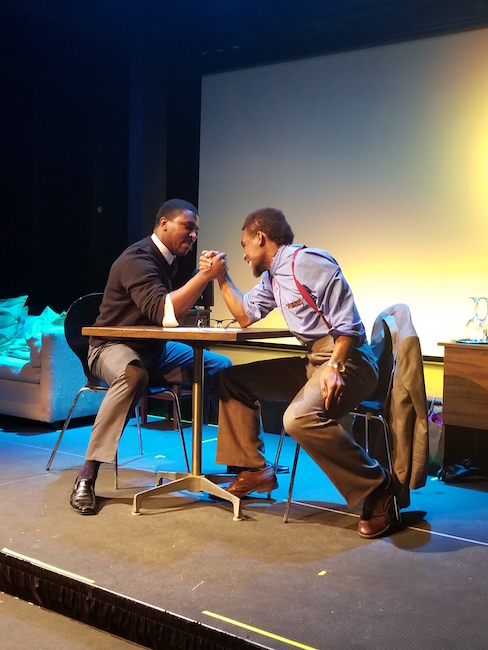 Set in a hotel room looking over the streets of Harlem, The Meeting suggests what may have happened if the two most important and intriguing figures of the Civil Rights Era, Malcolm X and Dr. Martin Luther King Jr., had a one-on-one conversation at the height of the movement. Playwright Jeff Stetson imagines what the two may have discussed and JPEK CreativeWorks brings the story to life with committed performances and effects that provide historic context.

Naturally, there’s a lot of conjecture here and, perhaps due to their very different approaches, the two men initially eye each other with caution and skepticism. Malcolm X wonders whether Dr. King will even show. King questions what Malcolm X might want from him, eventually deciding that he must need protection and support. Both men have received death threats and been subject to violence, including the firebombing of Malcolm X’s house that very morning. Both realize they may not live to see their work completed, but neither is willing to back down any more.

Zachary Clark as Martin Luther King Jr. and Jason Little as Malcolm X are committed and convincing in their portrayals of the icons, but they avoid outright impersonation. Greg Jamison starts stiff but relaxes into the role of bodyguard Rashad, delivering increasingly comic asides that help to break the tension. The performances are referential, and each of the actors has just enough resemblance, through hairstyle, physical bearing, and costuming, to evoke the men they portray.

The emphasis here feels on the personality and intention of each character, and the actors move with a natural and unaffected ease, invoking a style that suggests each man. More careful study of Malcolm X’s and King’s natural speech patterns and inflection will help to add depth to their characterizations, but the two actors capture the essence and energy of the men they portray. Little comfortably slides into the rhythm of Malcolm X in his short soliloquies and Clark finds King’s gravitas when he speaks of his purpose and calling. The same attention to detail during more conversational moments, to capturing tone as well as intonation, will enhance the performances.

Director Joel P.E. King incorporates historic footage from the late 1950s and 60s well, particularly during the opening scenes. The film provides context and underscores the sense of responsibility -- the weight -- each man carries on his shoulders. The device is surprisingly evocative and enhanced with a moody, contemplative sound design that features a haunting Billie Holiday number and the jazz standard “Take Five”. The other technical elements, lighting, sound, and costumes, are appropriately simple and keep the focus squarely on the two men. The company has some technical hiccups they need to smooth over, the timing of some of the video was off and occasionally started with a glitch and a few scenes stretch longer than they should, but the entire show is thoroughly engaging and interesting and the errors don’t significantly detract.

Some criticism should also be directed at Stetson’s script, which struggles at times to find the balance between the men’s personal and public selves. Clark and Little do good work keeping us interested when the dialogue turns to pontification, and each reveals aspects of the historic figures that are personal and heartfelt. However, there are too many moments: the arm-wrestling, the exchange where Malcolm X tries to insist that King have a glass of water, and the chess analogies, that feel as artificial and manufactured as they are. In contrast, both the scene on the balcony and the exchange of the doll ring as authentic and emotionally grounded. Director King and the actors put in admirable work to make all the scenes play, but they’re saddled with too many purposeful but clunky metaphors here.

History recounts that while the men did meet, they only had a brief exchange. The Meeting conjures the character and philosophy of the two men and channels what we know of them into a spirited conversation that touches on the men’s differences and similarities. While neither concedes to the other, the story implies mutual respect bordering on admiration and a tacit acknowledgement that both men valued the work of the other. The moment feels good, even if the truth of history suggests otherwise.

Due to positive feedback and ticket sales, JPEK CreativeWorks is pleased to announce that The Meeting will receive additional public performances at the .ZACK Theatre, February 23 and 24.