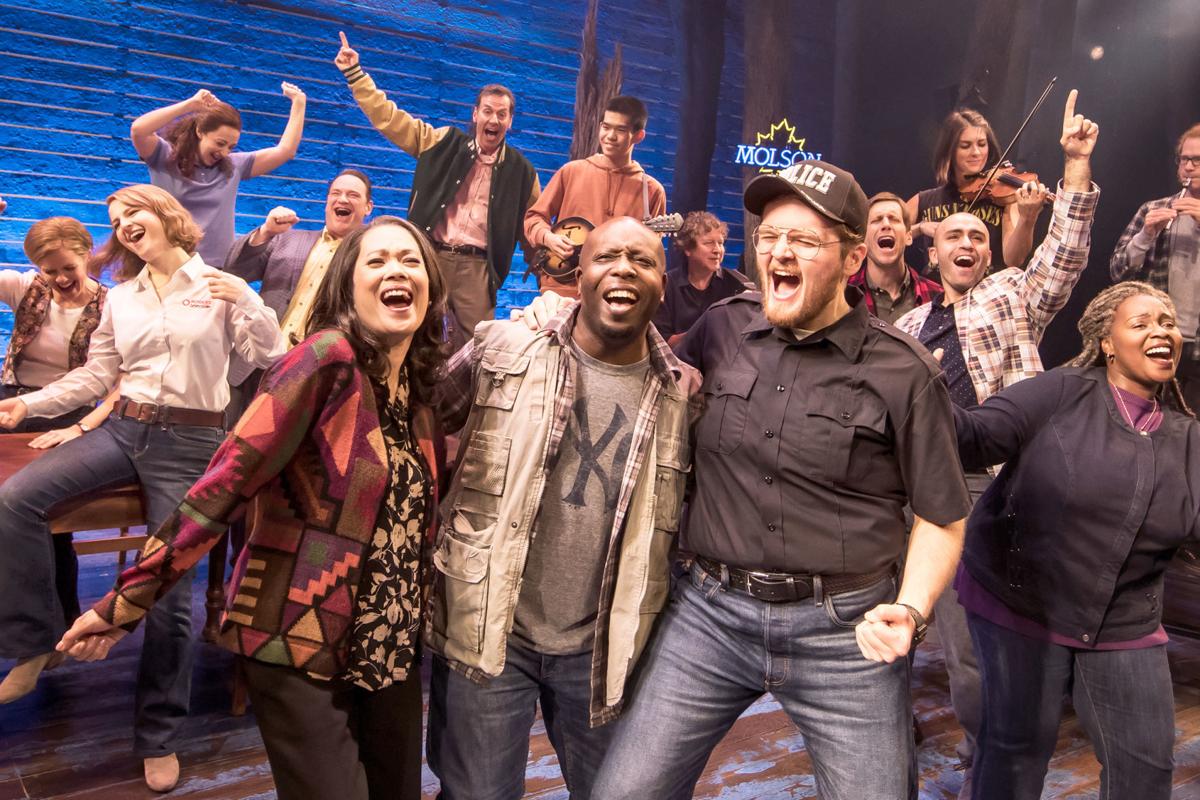 “Come From Away,” in performance at the Fabulous Fox Theatre through May 26, is an intricately woven and ultimately uplifting musical that draws heavily on the Irish tradition of storytelling via song to honor our better angels. The show follows the citizens of Gander, Newfoundland, a small island with a big airport, and various travelers whose flights were diverted there during the first harrowing moments of 9/11. When the U.S. was attacked and most in need of compassion, the island’s residents opened their arms and homes to 7,000 stranded travelers, shouldering some of our burden with cheerful resolve.

The compelling musical captures the uncertainty and fear that reverberated after the tragedy as travelers and flight crews desperately search for news, often reacting with a mixture of shock and relief. An airline captain learns of the death of her friend, the pilot of the plane that crashed into the Pentagon; the mother of a New York fireman waits much longer for news about her son; and everyone wonders when they might be able to get home and will they arrive safely. Perhaps more importantly, the show offers hope and faith in our shared humanity as the residents of the small town scramble to make everyone feel not simply as comfortable and secure as possible, but welcome. The bond between the unexpected visitors and their host city was instantaneous and sustained, in 2011 Gander invited the travelers and flight crews back to the island for a reunion.

Irene Sankoff and David Hein’s music, book and lyrics about those few days on the island tremble and soar and plummet and rise again with a visceral, evocative resonance. Representative characters help us understand the mix of people who formed a temporary community of strangers when all flights were grounded, and stories of individual experiences unfold in ways that speak to our commonality. The days immediately after the attack must have felt like a surreal nightmare to the travelers and townspeople, still they kept caring, trying to lift each other up or provide a shoulder to cry on while waiting for news.

The cast of 18 adroitly switches their accents, accessories and attitudes to fully realize each storyline. And the people in “Come From Away” – the determined Mayor, middle aged moms Beulah and Hannah, Janice the new reporter on her first assignment, entrepreneur Kevin and his boyfriend Kevin, Beverly the captain of one of the planes, Ali the Muslim chef, Bonnie the dedicated ASPCA employee and her patient, supportive husband, and Nick the British executive and Diane the divorced Texan – are captivating, authentic and well motivated. Actors Kevin Carolan, Harter Clingman, Nick Duckart, Chamblee Ferguson, Becky Gulsvig, Julie Johnson, Christine Toy Johnson, James Earl Jones II, Megan McGinnis, Andrew Samonsky, Danielle K. Thomas and Emily Walton fully embody the principles and are capably supported by the rest of the remarkable ensemble.

The Irish influence on the island is clear as electric guitars and a drum kit complement traditional instruments including an accordion, Uilleann pipes, Bodhran and fiddle. The melodies are memorable, with big numbers that fill the room with powerful energy and smaller, more intimate moments revealed in well-harmonized renditions with convincing context. “Welcome to the Rock” is a driving anthem that sets the mood and delivers a convincing hook, “38 Planes” has a lilting, almost dreamlike quality, “Prayer,” “Me and the Sky” and “Stop the World” are as emotionally compelling as they are lovely, and “I Am Here” is heartbreaking and plaintive. The eight-piece band, under the direction of conductor Cynthia Kortman Westphal, is seated on either side of the stage and occasionally involved in the bigger numbers, adding more layers of interest (rather than set pieces) to the constantly moving, well appointed show.

Nearly 20 years removed from 9/11 and not set in New York City, “Come From Away” is, nonetheless, among the most substantive theater created about the terrorist attacks. The perspective is admittedly white and European, but the story is sincere and genuine. The lengths to which the Newfoundlanders go to accommodate each guest and their refusal to take any money from the travelers demonstrate decency, respect and concern that is not defined by race, religion, preference or ethnicity. Instead, the musical effectively celebrates the ways people comfort and care for each other during our most troubled and painful hours. While the complex story may be a trigger for some, it is beautifully, sensitively and honestly wrought.

Performed without an intermission and with the most significant moment of the story its genesis, the musical takes root and blossoms into a beautiful collection of individual voices and experiences. The authors provide credible characters that elicit sympathy, there are no temper tantrums, and director Christopher Ashley embraces the cheerfully even-tempered approach while creating incredibly singular moments that elicit laughter, warmth and tears. Like many modern musicals, the production is a compilation of personal stories told in song by characters numerous and intertwined, ensuring “Come From Away” is a spectacular mélange.