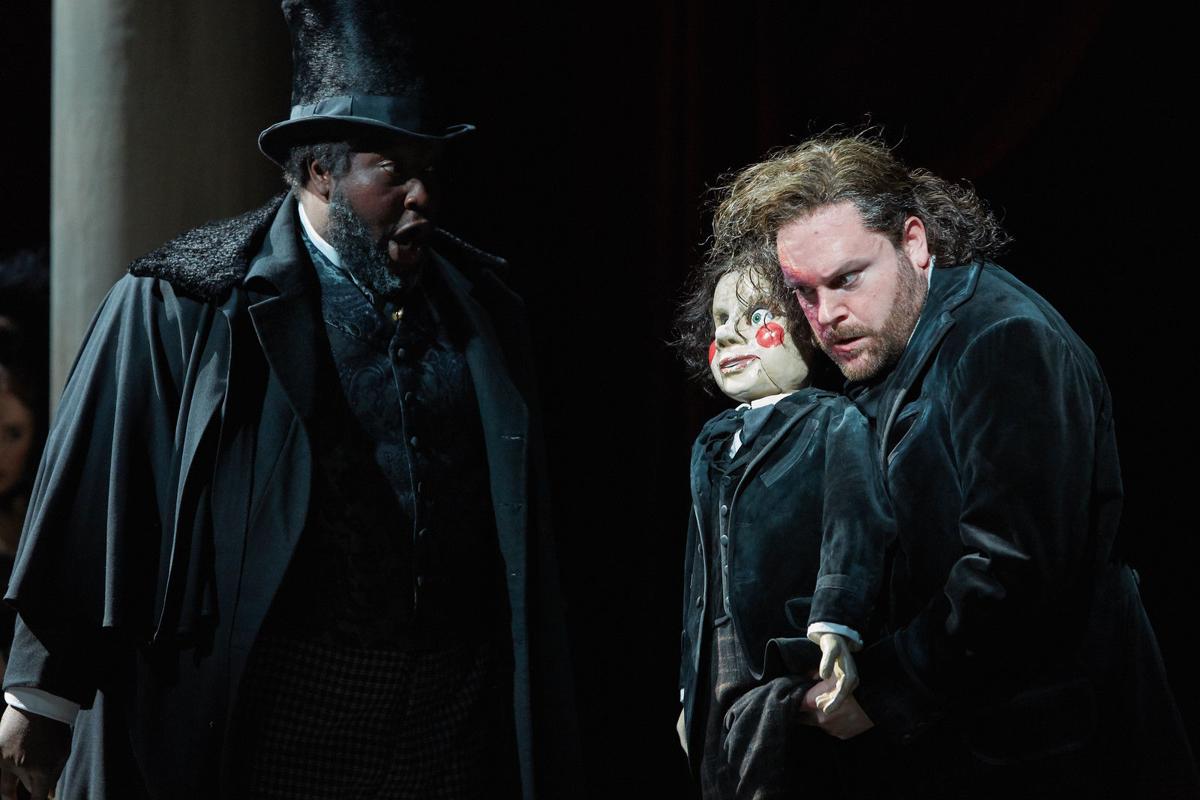 A Glorious 'Rigoletto' Opens at Opera Theatre of St. Louis

The Opera Theatre of St. Louis continues its 44th festival season of world class opera with a magnificent production of Giuseppe Verdi's 'Rigoletto.'

Now Verde and his librettist, Francesco Piave, set the story in 16th century Mantua, but stage director Bruno Ravella has chosen to place it in Paris in the 1880's. It works very well. This is a dark, dark story of vengeance, and the large male chorus is a most important element in it. Men's fashion at this time and place — especially formalwear — was uniformly black. Thus this chorus can visually deepen the blackness of the story. Even Rigoletto, denied his usual motley, appears in black.

The Duke of Mantua is a notorious libertine; his hobby is seduction. Rigoletto is the Duke's "fool" — his personal entertainer. Among Rigoletto's duties is procuring women for the Duke, as well as mocking and humiliating the men in the Duke's court. He hates his job!

Rigoletto is traditionally played as a hunchback, but director Ravella employs a clever novelty: this Rigoletto is a ventriloquist; his dummy, which looks very like Rigoletto, is the hunchback. It is the wicked dummy who lashes out with all those vicious insults. 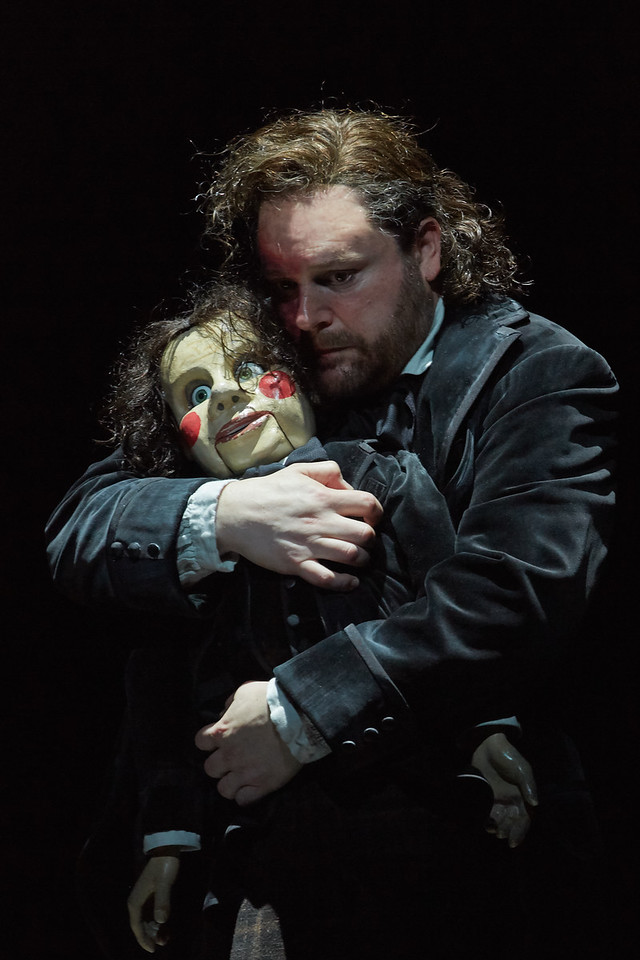 Like the Phantom of the Opera Rigoletto has a horrid facial deformity (which he tends to hide under a black slouch hat). Roland Wood is most assuredly one of the great Rigolettos of our time. His strong, clear voice fills the space, and he is so gifted an actor that he makes the horrendous passions of this story quite real. He triumphs in this role and stamps the production as his own.

The profligate Duke is sung by Joshua Wheeker. He makes a young attractive Duke, and his voice is so beautiful that one understands how a girl would be smitten with him.

We meet the lovely Gilda, Rigoletto's daughter. She is (in the Gollum sense) his "precious." She is the focus of his whole life. Gilda never leaves home except to go to church. She is such an innocent, such a total "naife," that she doesn't even know her father's name. The Duke has set his eye on her, and in her utter innocence she falls in love with him at first sight. So Young Park (who did such astonishing work as Zerbinetta in 'Ariadne on Naxos' three years ago) sings Gilda. Such technical perfection!  At first Miss Park seemed a little emotionally cool, but she warms into the role and opens her heart to us. Again she pours forth those sublime vocal acrobatics.

Christian Zaremba is gracefully menacing as Sparafucile, the hired assassin. On his exit at the end of one scene he holds an almost sub-sonic bass note practically forever.

Other outstanding voices in this mighty cast include Nicholas Newton as Count Monterone, who thunderously curses the Duke and Rigoletto for despoiling his daughter; William Guanbo Su and Lisa Marie Rogali as the Count and Countess Ceprano; Ryan Bryce Johnson and Heeseung Chae as friends of the Duke; Rehanna Thelwell as Gilda's governess; and Lindsay Amann as Maddalena, the assassin's earthy and vital sister. 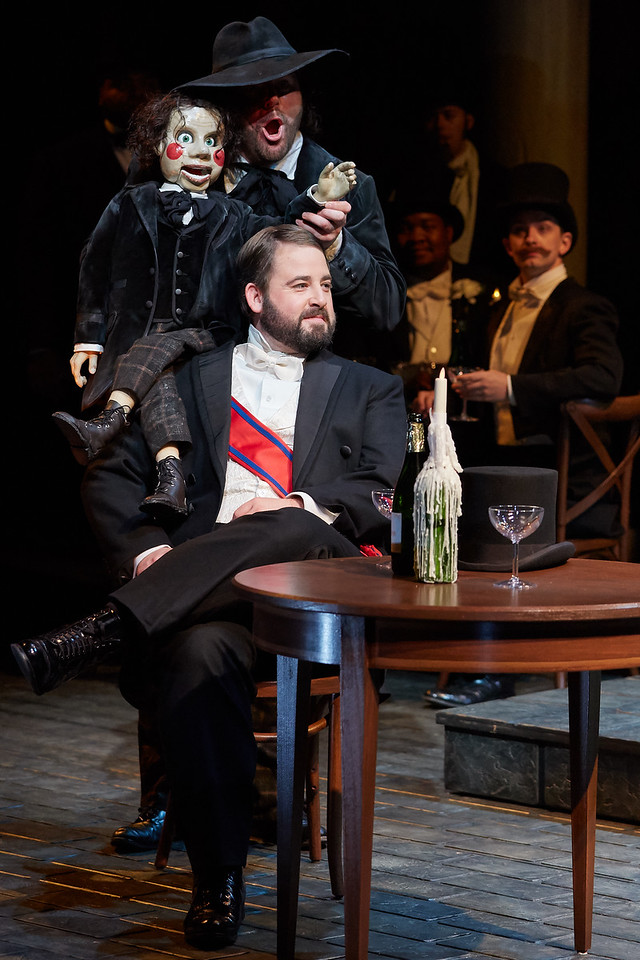 The chorus, under Cary John Franklin, is wonderfully rich and dramatic.

Maestro Roberto Kalb leads his orchestra and singers into beautiful balance. I was impressed with the very real sense of distance he achieved with the off-stage chorus and, especially, with the Count's final heartbreaking "La donne è mobile."

The set, by Alex Eales, is perhaps the most graceful I've seen at OTSL. Framed with elegant great marble arches the various scenes shift smoothly into and out of place. Lighting designer Christopher Akerlind again shows his genius in beautifully supporting all the various darknesses — yet allowing the singers to be, for the most part, quite visible.

The elements were in tune with the opera's overpowering curse. There is thunder in Verdi's score and there was much thunder, rain and dramatic lightning outside during intermission. But that did not dampen the glorious evening, nor the joyous celebration under the tents after the thunderous standing ovation that closed the show.

Another triumph for Opera Theatre of St. Louis: Verdi's 'Rigoletto.' It runs through June 30.