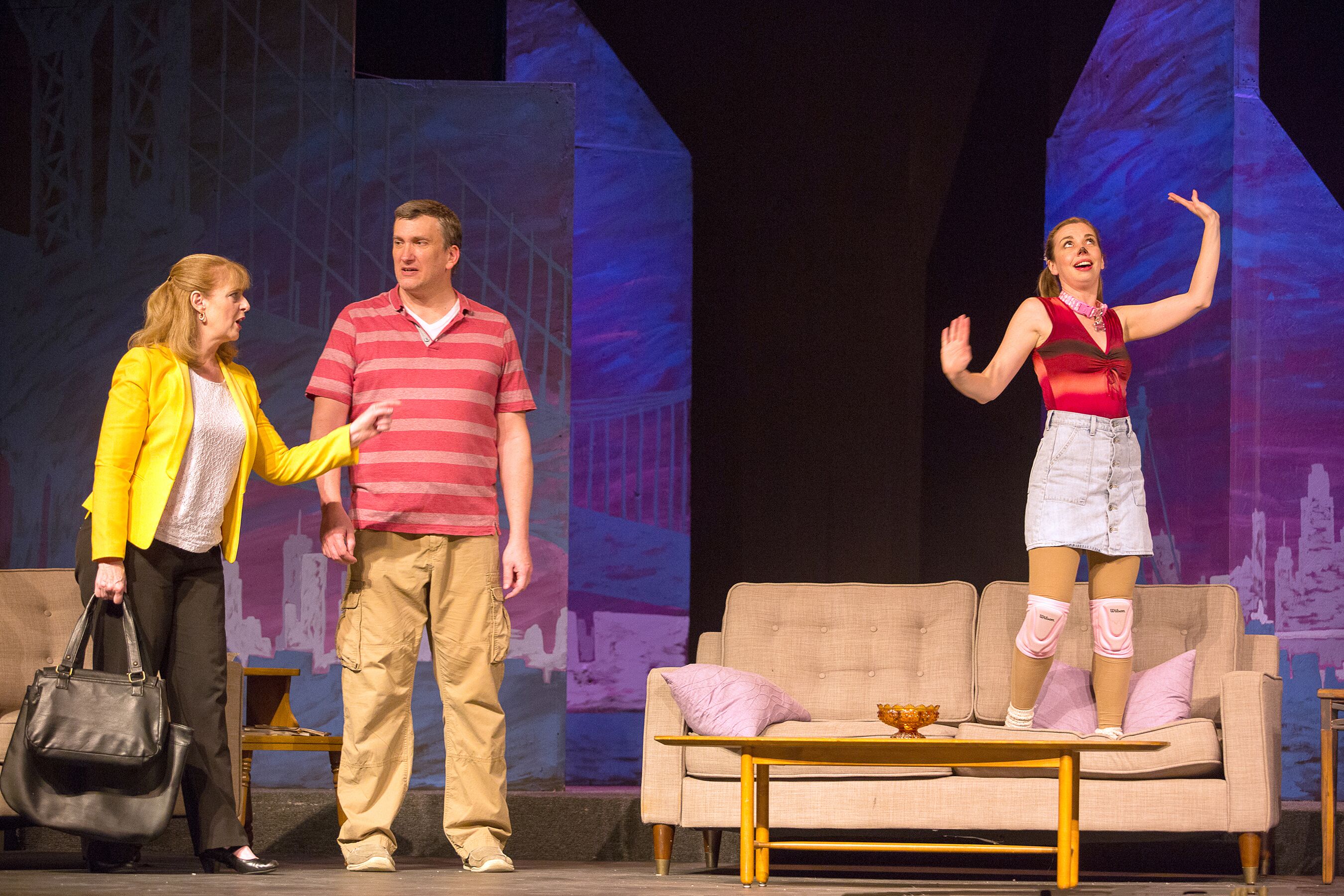 For a midlife crisis with an inter-species rivalry, ‘Sylvia’ is a doggone good time

Stray Dog Theatre introduces audiences to Greg and Kate, empty nesters who are living their best life together now that they’ve sold their big house in the suburbs and moved to the heart of New York City. Kate is happily and quite successfully pursuing a return to her teaching career. Greg is not as happy with changes at his office, leaving him dissatisfied and uncertain. Things have gotten so bad that Greg has taken to ducking out of the office some afternoons and seeking solace in Central Park.

On one such afternoon, Greg meets Sylvia, a friendly and playful little dog that seems to have been lost or abandoned by its owner. Immediately smitten, Greg brings Sylvia home to meet Kate. Unfortunately, she’s less than enthusiastic to see her husband showing up with a stray. They agree that Greg can keep Sylvia for a few days; but those days turn into weeks, then months, until Kate begins to suspect that Greg would rather be with Sylvia than his own wife.  The tension is high and the drama hilarious in this comedy. Is Kate right? Would Greg actually choose a homeless dog over his wife of more than 20 years? The answer isn’t certain until the closing scenes, but the humor is abundant from the very first moment on.

Tim Naegelin is comically caught in a no-win situation after finding and falling for Sylvia, a rambunctious bundle of curiosity and energy played with just a touch of attitude by Susie Lawrence. Naegelin is thoroughly likeable as Greg, sometimes boyishly excited, other times heavy with the responsibilities of adulting, but always sympathetic. His character is relatable to anyone who’s gone through a slump at work and Naegelin’s demeanor, both resigned and hopeful, makes it easy to understand his attraction to a dog that so clearly adores him.

A mutt of uncertain lineage, Sylvia is a bundle of energy and curiosity who’s just looking for her forever home. Lawrence perfectly captures the dog’s unbridled enthusiasm as well as Sylvia’s vulnerabilities and insecurities, though even these are generally played for laughs. She and director Gary F. Bell incorporate movement that perfectly reflects dog behavior and, while we aren’t accustomed to pets fluent in the English language, it somehow seems natural in Lawrence’s unaffected and appealing performance.

Kay Love is appropriately mercurial as the frustrated Kate. She loves her husband but she knows that a dog in the house is more work for her, not to mention the cramp it will put in their social life. Love takes an immediate dislike of Sylvia, which Lawrence reciprocates, but still we see her cleaning up and caring for the dog – perhaps out of habit. Love and Lawrence play tug of war on Naegelin’s heart in a rivalry that’s instantly familiar and absolutely funny. We all know someone who seems to love their pet more than the humans in their life and the talented actors capture and ramp up that tension.

Melissa Harrow rounds out the cast in three different roles, each a spot on exaggeration of people you’re likely to run into everyday. With surprising diversity and ease, she’s swiftly transforms from Tom, an over-sharing dog dad, to Phyllis, a snooty uptown socialite friend, to, Leslie, a hilarious new age therapist of purposefully indeterminate gender. The four actors work exceptionally well together, finding every bit of humor in A.R. Gurney’s clever script and delivering their lines with connected but comic motivation that clearly tickles the audience’s collective funny bone.

As usual, the production team at Stray Dog makes the most of the theater space. Miles Bledsoe’s scenic design, augmented by Bell and Justin Been’s properties and Bell’s contemporary costumes, gives Greg and Kate’s New York apartment a comfortably lived-in feel. Additionally, Tyler Duenow does his usual capable work with the lighting design. While it would be nice to add a follow spot for the roaming scenes, the space is lit well enough that the actors are never completely in the dark, unless by design. The aisles and side of the stage are nicely utilized, particularly for the opening and dog park scenes, creating the sense of a much larger playing space. Though an individual audience member’s sightlines may be occasionally blocked when the show wanders of the proscenium, the actors are easy to hear and constantly moving, so nothing is lost.

There’s so much relatable and funny truth in the show that the staging plays out like a sitcom comedy, though the ending is bittersweet. Solid direction by Bell and a talented cast makes me think I would tune into “Sylvia,” continuing through June 22, on a regular basis – the chaos just barely under control and the comedy authentic, with a touch of the absurd. The comedy to drama balance is near perfect and the situation so easy to relate to, with lasting love as the lynchpin that holds everything together, that you might find yourself as caught up in the excitement as Greg.