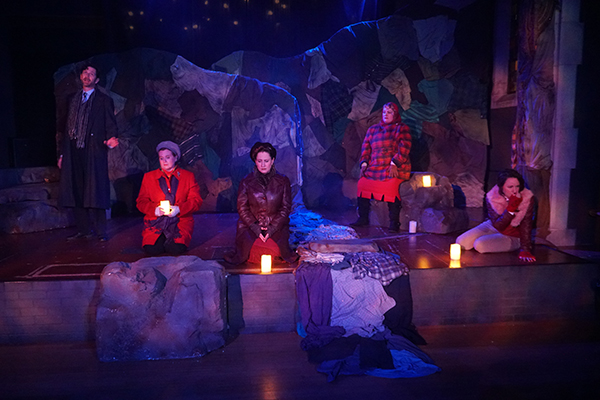 Grief Writ Large in 'The Women of Lockerbie' at SATE

“The Women of Lockerbie,” now being produced by the Slightly Askew Theatre Ensemble (SATE), is the best-known work of playwright Deborah Brevoort. The play, from its title to its structure, takes its inspiration from Ancient Greek tragedy in order to address the 1988 bombing of Pan Am Flight 103, particularly its aftermath in the Scottish community of Lockerbie. When the production stayed close to the script’s classical inspiration, it was effective. But when other styles crept in – such as realism and melodrama – it was less successful for me.

The scenic and lighting design by Bess Moynihan was a good example of this. In a proscenium arch, Moynihan created a silhouette of mountains by pasting an impressive assemblage of clothes together. Likewise, a river was created by a line of clothes running downstage. This was an elegant and poignant design. It was marred, however, by a series of fake rocks designed to look real. While the rocks provided useful levels for acting, they seemed out of place in the otherwise expressionist set.

Of the actors, the ones that were the most directed towards the ritual style of Ancient Greek tragedy were playing the chorus of women of Lockerbie: Leslie Wobbe, Sarajane Alverson, Kim Furlow, and Jennifer Theby-Quinn. They carried out the style well. They gracefully moved from speaking in unison, to individual lines, to singing, all while elegantly carrying out gestures and choreography. Director Pamela Reckamp made strong choices with this chorus, and by and large I found the choices efficacious. But when the choices strayed towards realism, they could detract.

For instance, the chorus had gestures that went along with their words, and I found this idea extremely compelling. However, the gestures were American Sign Language that communicated the same words that the women were speaking. That made the hand gestures repetitions of the spoken text rather than visual juxtapositions to the dialogue. Similarly, the attempt to stage realistic violence onstage rather than an abstract image conveying violence brought the production away from the style of Greek tragedy. And, because the stage violence did not manage to provide the illusion that it was real, it took me out of the emotional moment of the show.

The slow pacing that Reckamp gave the production I believe was meant to create a somber, serious tone. For me, however, the slow pacing created an air of melodrama rather than tragedy. For example, the large and frequent pauses in the performance of Margeau Baue Steinau combined with her formulaic gestures made her character seem more of a victim in a melodrama rather than a fate-plagued woman of an Ancient Greek tragedy.

There were other moments throughout the production that effectively used abstraction to create a ritual feel of Ancient Greek tragedy. However, there were more choices made that gave the production the feel of misplaced realism and melodrama. The production’s bright spots showed how this production could shine, such as the clothes utilized in the set design and the acting of the chorus, but its slow pacing, moments of realism, and slips into melodrama ultimately obscured the production’s full potential.

Performances of "The Women of Lockerbie" continue through November 23rd at The Chapel, 6238 Alexander Drive in Clayton.