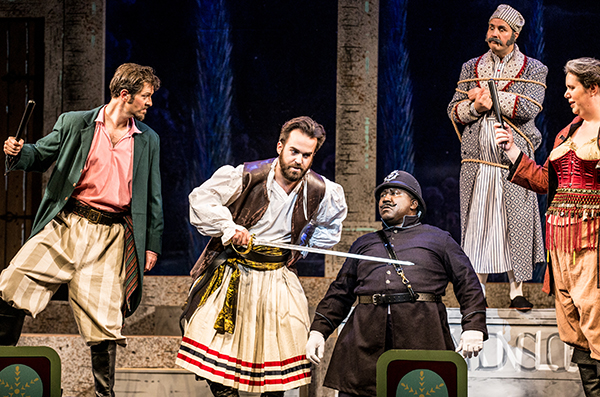 A Boisterous Happy Tale Of Love And A Victim Of Duty

It's 140 years old, but it's as fresh and appealing as when it first bounded into the public eye on New Year's Eve, 1879. It's The Pirates of Penzance – perhaps the most irresistible of Gilbert and Sullivan's comic “Savoy” operas. Winter Opera has mounted a delicious production (alas for only two-performances – November 9 and 11).

This is the wondrously improbable tale of Frederic, an orphan mistakenly apprenticed to a pirate. A victim of duty, he has honored his contract of indenture in this odious calling. But Frederic has now achieved his majority and is free to follow a more honest path. We meet the inevitable delightful bevy of maidens. They are the daughters of Major General Stanley, who stuns us with his lightning diction in Gilbert and Sullivan's very best “patter” song, “The Model of a Modern Major General”. True love arises between Frederic and the lovely Mabel. The pirates plan to forcibly marry the other daughters. A squadron of police appears and does battle with the pirates. They are the goofiest constables you've ever seen – veritable Keystone Kops (though they preceded their cinematic counterparts by some forty years). In the end, of course, honor, patriotism, and true love triumph. Is this comedy?  Well, it ends with 10 marriages, so it must be. And it's as zany and irreverent and modern as Monty Python. There is an extended confusion with the words “orphan” (one without parents) and “often” (“frequently”) that is pure John Cleese and Eric Idle.

Winter Opera St. Louis is in its 13th season, and Gina Galati has made this company a reliable source of very high quality opera. Moreover, she has led it into its very welcoming sense of familial warmth. She clearly knows and loves her audience.

This production, like so many others, is blessed with a gorgeous set by Scott Loebl. We have grand sea-side cliffs, a ghostly funerary chapel, and (as always) a glorious sky-scape – this time straight out of Maxfield Parrish. At Winter Opera I am now so accustomed to Mr. Loebl’s amazing skies that I almost forgot to gasp in wonder.

The very strong cast includes two especially remarkable performances. Mabel, the daughter who captures young Frederic’s heart, is splendidly sung by Chelsea Friedlander. Beautiful, graceful, Miss Friedlander has an angel’s voice that so easily and perfectly masters all those coloratura cadenzas and trills and frills that adorn the part. But equally remarkable (and more of a surprise) is the performance by Sara Couden as Ruth, the pirate’s “maid-of-all-work” and Frederic’s childhood nurse. Miss Coudon wields a lovely, strong contralto, her diction is crystalline, and what a comic sense! She’s almost a head taller than most of the pirates, and rather powerfully built. All this lets her pretty much capture any scene she’s in .

Tenor Pedro Barbosa makes a dashingly handsome Frederick, and he has a sweet, sure voice. He’s nicely matched with Miss Friedlander. Major General Stanley, the girls’ father, is a gem of a role. Gary Moss does fine work here, though he’s rather younger than is ideal for the role. He proved quite up to the very demanding rapid-fire patter song, “The Modern Major General”. He seemed to grow in strength in the second act.

Lovely work is done by Andrew Pardini (as the Pirate King), Robert McNichols, Jr. (as the Sergeant of Police), and Jason Mallory (as pirate Samuel), the delightful maidens of the chorus, the hearty pirates and the bumbling police.

An amusing cameo is given into the hands of the company’s major sponsor. Mary Pillsbury Wainwright appears briefly as Queen Victoria, allowing the pirates, policemen – everybody – to pledge their fealty to her. The generous lady deserves a moment in the spotlight.

Ten weddings!  Now the nine daughters are to marry Frederick and his pirate friends (who have been revealed as “noblemen who have gone wrong”). In most productions it is assumed that the romantically needy Ruth is to marry the Pirate King, but here we see she is to marry the Sergeant of Police. This actually makes more sense, since at the top of the show the Pirate King makes it clear he is eager to be rid of Ruth. The Sergeant’s betrothal leaves those other policemen without brides. Ah, well, I guess that for them “a policeman’s lot is not a happy one.”

The orchestra is deftly led by Scott Schoonover. You will be struck with the real beauty of this music. (In the premiere production the orchestra threatened to strike for higher wages because Sullivan's music was closer to opera than to operetta.)

Excellent costumes are by Felia Davenport. Some might be surprised to see the Pirate King wearing (along with his pirate coat) a sort of peasant skirt and pantaloons. This buccaneer is usually differently garbed in modern productions, but the eccentric skirt was used in the premiere production in 1879.

Natali Arco’s lighting was generally fine, but lapsed into strangeness in Act 2, when weirdly roaming red spots appeared against the sky – followed by drifting swarms of white dots, like a drunken disco-ball. Huh?  But this is a pecadillo in a generally fine production.