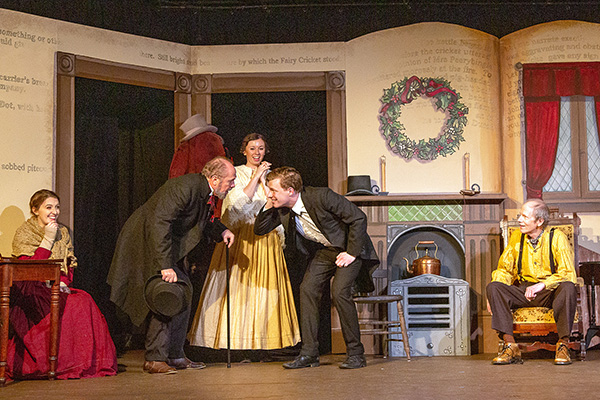 'The Cricket on the Hearth' offers holiday cheer for a cold St. Louis evening

According to West End Players Guild archives, the company, operating since 1911, has had quite a few St. Louis and World-Premiere productions under its belt. This holiday season they’ve done it again with the World-Premiere of a new stage version of The Cricket on the Hearth. Playwright Vladimir Zelevinsky (who was in attendance on opening night) has adapted the work from a Christmas novella written by Charles Dickens in 1845, published only two years after his more celebrated holiday work, A Christmas Carol.

In this production Director Steve Callahan has cast Gracie Sartin as a charming young Dot, wife to an older deliveryman John (a stoic Chuck Winning). Married only a year, they are parents of a new baby boy. They are friends with a struggling toymaker (Charles Heuvelman) and his blind daughter (a sweet Samantha Hayes), and local girl May (Mary Tomlinson) whose fiancé went on a journey and is presumed dead. The local “Scrooge” is Mr. Tackleton (effectively portrayed with an impressive sneer by Kent Coffel), and the “mysterious stranger” (Kellen Green) turns out to be the glue that eventually unites the characters, unobtrusively accompanying all through various trials and misunderstandings to a (Ahhhhh) traditional Dickens Happy Ending. An offstage flute (Cameron Perrin, the cricket, considered good luck) and a violin (Heather Chung, a humming tea kettle) completed the cast.

Any rough areas in the play seemed to be in the first act, at least on opening night. The entire cast were sporting an English accent, speech by some actors sometimes difficult to understand. There was a lot of exposition rather than action, a challenge to make sense of at the start. Also some actors seemed to speak faster in the first act, which again, didn’t help. The second act, however, the pacing was easier, and easier to understand, and by then the story had developed so the audience knew what was going on.

The set (George Shea) was charming, background flats resembling an open and illustrated storybook, and extra pieces brought out for a second set downstage were nicely done. I thought the costumes (Tracy Newcomb) looked period and were very effective.

A bit of holiday cheer and a celebration of the human spirit to consider as we headed back out into a cold St. Louis evening.

The Cricket on the Hearth runs approximately 90 minutes with a 15-minute intermission. It is on stage at the Union Avenue Christian Church through December 15, 2019.

For more information on this production, and the continuing season at the West End Players Guild, visit westendplayers.org.