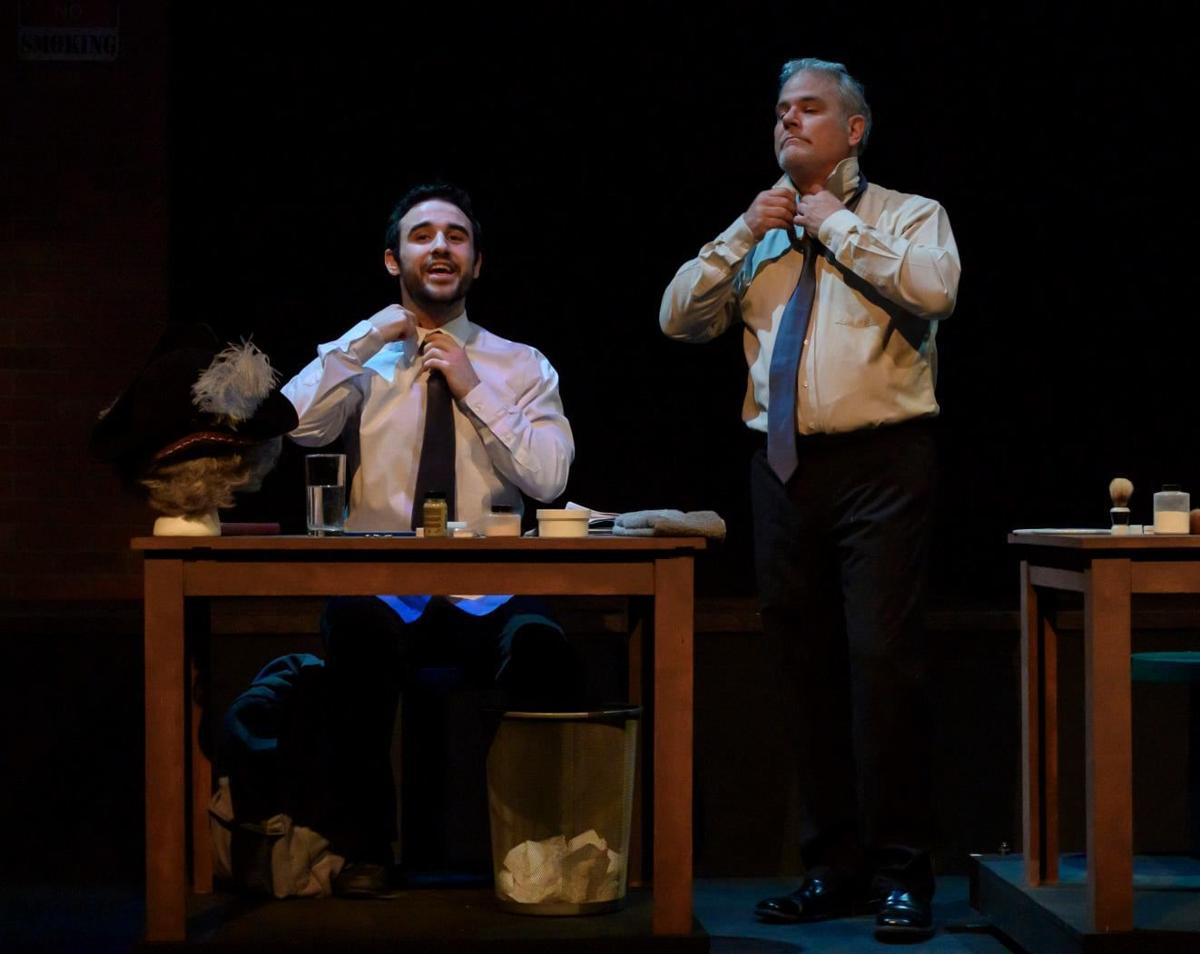 ‘A Life in the Theatre’ is a gracefully compelling reverie on craft, commitment and the continual search for perfection

St. Louis Actors’ Studio continues its season of two-hander shows, that is, plays with just two characters, with “A Life in the Theatre,” David Mamet’s one act play that celebrates and reflects on actors who have managed to persist in their profession despite personal and financial obstacles. Compellingly thoughtful and naturally realistic, the production, which examines two working actors at markedly different stages in their career, is seeped in detail and nuance.

The play introduces audiences to Robert, an older, more experienced actor, and John, an actor in his prime for leading and romantic roles, just as they’ve finished an evening’s performance. The two are backstage, removing their makeup and discussing that night’s show. John is eager to get on with his after-show plans, but Robert is in the mood for a critical evaluation of his performance, plus he has a note or two for John. When John offers a minor suggestion in return, the audience can see it crawl into Robert’s consciousness, causing him to turn it over and over in a quest for perfection that nonetheless ruffles a few of Robert’s feathers. John is similarly thrown out of sorts by Robert’s notes, but both recover quickly and each seems genuinely committed to refinement and improvement. Actors of their experience must have a thick skin, after all.

William Roth pontificates and suggests with blustery assurance and the confidence of a man who’s earned the right to quibble here and there. Roth also skillfully reveals the older actor’s sense of loneliness outside the theater, as well as his concern over slipping lines, slower reactions and various other hallmarks of aging. In a lovely touch, regular St. Louis theatergoers may even notice subtle tributes to familiar actors who have graced the region’s stages over recent decades, including several that are no longer with us. Ryan Lawson-Maeske is bright and compelling as the young and vibrantly energetic John. Though he’s got a busy life off the stage, he reveals a kind heart when he pauses to listen to and converse with Robert or asks him to join him and his friends for dinner.

As the play continues, we see glimpses of performances, from a backstage view as well as continuing conversations between the men as they sit at their dressing tables and prepare for or rap up their performance. The widely varied plot lines and accents employed in the play snippets provide moments of levity while also revealing weaknesses in each character; though it’s refreshing to note that, despite both actors' frustrations and not always successful efforts to get back on track, there’s a distinct lack of angry outbursts or accusations. We even get a few minutes of rehearsal and collaboration in the tenderly reflective show. Additionally, assistant stage managers Lindsay Mosher and Erin Blair are a visible and constant presence that adds an authentic touch while keeping the show moving with a steady hum. The cumulative effect is convincingly engaging and dramatically compelling, though the show lacks explosive conflict and the tension is more internally generated.

There are sections of the play where Lawson-Maeske seems to be absorbing every interaction with the enthusiasm of a thirsty sponge, but some of his best scenes are filled with silent observation and introspection. As in life, each actor looses his patience with the other at times, but it’s always a fleeting moment with quick reparation. Even when John's at the end of his patience with Robert, he restrains any impulse to strike out, and one of the most memorably poignant scenes in the show occurs when John watches Robert performing to an empty house. It’s a powerfully affecting moment that’s beautifully set up by an earlier, more comic scene that finds Robert sitting in the darkened house observing John.

John Contini directs ‘A Life in the Theater,’ continuing through December 22, with certainty and absolute confidence in his actors, and the results are quite satisfying. Roth and Lawson-Maeske are well matched, expertly playing off each other’s energy in Mamet’s straightforward, but deftly constructed play. Their approach conveys, with genuine fondness, the work actors put into their craft. What really makes the show stand out, however, is the universality of the characters’ psyches – their insecurities and drive to keep working and improving is at once achingly resonant and humbling. With its measured pace and constant quest for perfection in the slightest of details, the show is not for everyone. But, if you’re looking for an alternative to the brain-rocking explosions and sound bite-like dialogue at the local cinema-plex, this gently persuasive show provides a thoughtfully entertaining option.