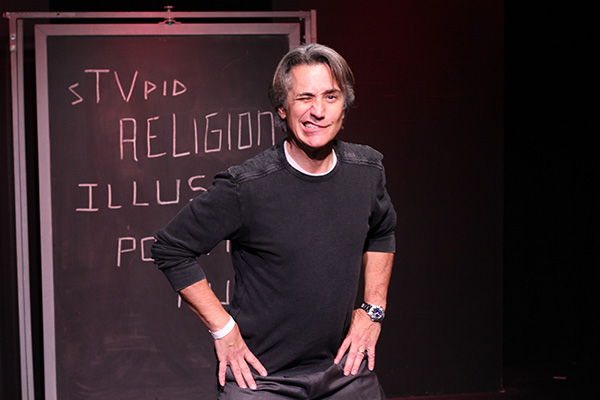 From The One, Several: The Humor Of Robert Dubac

Recently on stage at the Westport Playhouse were seven voices, but only one person. Robert (only his friends would call him Bob) Dubac embodied all seven: his own voice, and his voices of Reason, Common Sense, Inner Moron, Child, and Asshole, and Scruples. The work is entitled, "Idiocracy," but I'm sorry to say that word, as a description, was neither defined nor explained. Nor were details extensive on references to Mr. Dubac's having sustained a memory-stealing head injury, so I don't know if that was a performance conceit, or an actual fact.

For about 90 minutes Mr. Dubac and his cast of characters waxed humorous on a variety of contemporary topics. I believe there was a statement that Humor is just torture with the truth. His is the kind of cerebral humor that you really need to pay attention to: first to process what he said, then to decide if what you just heard was humorous to you or not. Subsequently, sometimes the laughs lagged a touch. Lighting changes were incorporated to delineate which of his characters was speaking (that I didn't think were really needed as his voice and body language made the distinctions), and whoever was on sound really needed to be on the ball to synchronize, as Mr. Dubac frequently talked to himself in pre-recorded segments. This was successfully done.

As to content, the process of thinking (PC in and not so PC out of a literal box) frequently arose as a topic. Mr. Dubac's views on politics (Trump as the new Orange American race) and statements regarding human overpopulation (if the poor stopped breeding there wouldn't be as many poor) didn't hedge. Overall, a kind of scripted stream-of-consciousness, and the constantly changing characters, kept the audience entertained.

Oddly, but pleasantly, a few magic tricks were dotted about, lending even more humor and a couple of gasps.

And the result? Overall, the humor was chuckle-worthy, rolling on the floor belly-laughs not in evidence, but the audience appeared to be having a good time, even staying around while Mr. Dubac tried out some spec material for another show.

For more information on upcoming shows at the Westport Playhouse, check out their website at https://www.playhouseatwestport.com/.