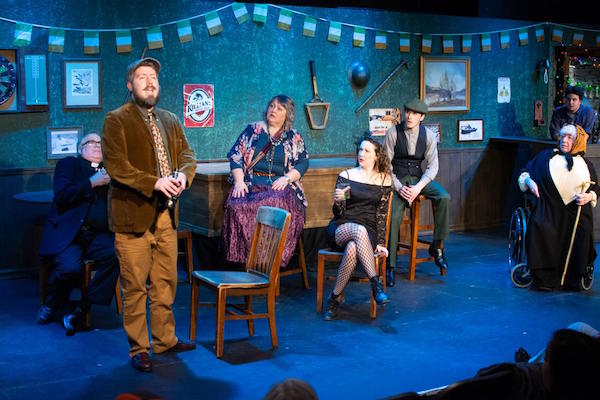 The Playhouse at Westport Plaza invites friends and acquaintances alike to join them for “Flanagan’s Wake,” a traditional Irish send off complete with Guinness® beer and Jameson® Irish whiskey. The next 2 hours or so will be spent in a comically musical tribute to the departed, with audience members providing “memories” to Flanagan’s closest friends and family, the cast.

Flanagan, an Irishman with a fiancée of 30 years and a perpetually warm seat at the local pub, has died unexpectedly. His casket, friends and family, which includes the entire audience, are all gathered in the pub to share memories and stories about the man, ensuring a proper Irish send off while also providing comfort to his mother and long-suffering fiancée Fiona Finn. Before the show, that is to say the wake, gets started, audience members are greeted by some of Flanagan’s closest friends and given an “appropriately Irish” name tag, mine was “Mary Tina” and a friend’s husband “Mark Patrick.” Next, guests are encouraged to grab a drink before taking our seat. The mood is jovial and chatty, making it easy to miss the start of the actual performance if one is not paying attention, particularly if Father Fitzgerald has cornered you with his Catholic recruitment speech.

The cast members continue to mingle with audience members as they get seated, and once the performance starts, the audience is called upon to provide suggestions, such as how Flanagan died, what his dream job would be, and such, adding improvisational content to the show’s structure. The back and forth creates a relaxed atmosphere that encourages participation and is augmented by sly jokes directed towards audience members. The teasing is at times a bit dated, but mostly harmless fun and the majority of audience members jump at the opportunity to be called out.

The witty and capable cast features Allan Knoll as the priest (alternating with Patrick Blindauer), Jennifer Theby-Quinn as fiancée Fiona Finn and Dustin Petrillo as local poet Mickey Finn. Brett Ambler, as Flanagan’s best friend, is particularly adept with the audience suggestions and even manages to liven up a few less imaginative ideas. Blindauer, Tom Clear and Charlie Mueller provide musical accompaniment that keeps the show moving at a good clip and handle improvised songs with ease. Lynn Berg (alternating with Steve Isom) as the mayor, Teresa Doggett as pagan Kathleen Mooney and Bill Burke as a devastated Ma Flanagan are genial and quick to respond in supporting roles. The ensemble does their best to blend the scripted and improvised elements of the show, unfortunately, the mix doesn’t always work out as well as one might hope.

Though the cast works to blunt the unpleasant edges of some of the material, the show feels like it should be at least 20 minutes shorter and contain 50% fewer stereotypes. There’s almost too much reliance on audience input and the show is structured in such a way that is goes too long, even as the talented cast quickly incorporates the improvisational replies. Additionally, the scripted dialogue and directions are filled with overdone clichés and even a few jokes that disparage individual audience members. And why must the played out trope of having a man dressed as an older woman with an amble bosom and a penchant for burying men’s heads in it persist? If the moment wouldn’t be funny with a woman in the role, it probably isn’t funny. Though I acknowledge that there are plenty of shows where such a role feels funny and appropriate, it simply feels tired in this production.

Director Lee Anne Mathews credibly holds down the chaos while allowing the actors the freedom to explore both their characters and the audience suggestions. The result is a funny and engaging production of an idea, conceived by Jack Bronis and created by Jimmy Binns, Amy Binns-Calvey, Geoff Binns-Calvey, Bronis, Mark Czoske, Phile Lusardi, Patricia Musker and Bonnie Shadrake, with Shadrake and Binns collaborating on the music, that may simply have to much going on to coalesce. Luckily, Mathews and the cast do a bang up lob, finding ways deliver the laughs while treading lightly around the tropes.

The cheerfully mourning of “Flanagan’s Wake” continues through March 21 and is definitely the type of show that’s best enjoyed with friends who are also willing to play along. The bonus is that the talented actors give it their all, distracting from the holes in the script by creating funny, slightly philosophical characters that are essentially endearing. In addition, a good time is almost guaranteed when experienced actors thoroughly and comically respond to the unknown possibilities of improvisation, resulting in a lighthearted comedy that will keep you laughing.