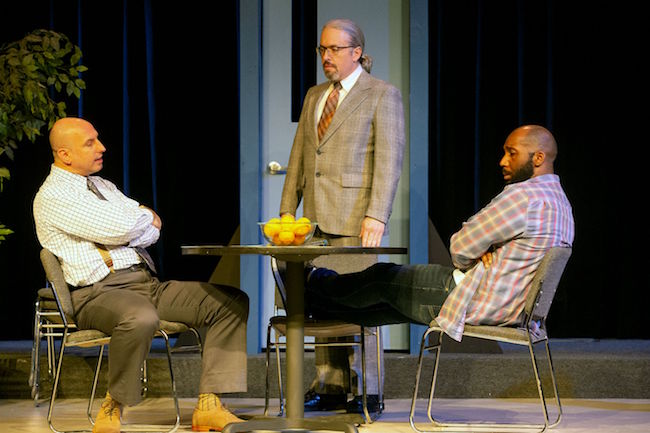 The provocative ‘Blue/Orange’ challenges common perceptions of health and care

With its thoughtful production of “Blue/Orange,” by Joe Penthall, Stray Dog Theatre explores the world of the mind, specifically mental health and its care. The surprisingly suspenseful drama is centered on the treatment of a single patient, but its implied reach is much broader.

The show touches on diagnosis and the importance of understanding the patient, as well as the god-like attitude and approach of some medical professionals. There’s an absolute punch of a twist between the doctors near the end of the play that makes sure you are never too sure about, or too comfortable with, their motives. Director Justin Been helms a small cast that shows full commitment to the show, even its most uncomfortable moments.

William Humphrey is Chris, a Black man suffering from mental illness who is scheduled to be released from an inpatient care facility later today. Chris is ecstatic, and Humphrey plays this -- and all of the character’s wildly swinging emotions -- with authentic intensity. His primary caregiver Dr. Bruce Flaherty, played by Jason Meyers, isn’t sure his patient is ready for release. He’s also concerned about Chris’s lack of a support system outside the facility. Meyers’ character has asked another doctor, his supervisor Dr. Robert Smith, played by Ben Ritchie, to sit in on the exit interview.

Chris is diagnosed with Borderline Personality Disorder, an important point of distinction as the play progresses. The doctors wrestle over his release and their professional assessments lead to a disagreement in care that eventually boils over into the personal. Chris, as patient and witness, travels the entire spectrum of emotions in response. There are moments when the question of Chris’s care seems more focused on his level of coverage, or at least the cost to the institution, than on Chris’s actual needs.

Then during a one-on-one conversation and with much leading of Chris by the doctor, Smith formulates a new approach to the patient’s care. One that seems to be based on a flawed and markedly racist assumption he’s determined to prove by treating Chris himself. Ritchie adds just the right amount of care-veiled hubris to make his bias clear. Though crucial to the plot, it’s just one of the many twists in the sharply written script that continually pokes at the health care business.

Humphrey, Meyers and Ritchie are excellently cast and smartly directed by Been in the complex but completely interesting drama. Humphrey’s command of a difficult role, his ability to play believably mentally ill and not ‘crazy,’ is expressive, beautifully nuanced and expertly delivered. His effortless shifts of emotion are as natural and seamless as they are, appropriately, bold and emphatic. Ritchie’s character is full of self-importance, a false sense of power and more than a touch of racism, as he reveals. In contrast, Meyers is compassionate and genuinely concerned for his patient. At least until he’s willing to cast him aside for his own advancement.

“Blue/Orange,” continuing through October 23, is more tautly drawn, with higher stakes than it first appears. Well-connected and realistically grounded performances and a relevant theme keep the audience interested in the complex machinations of the plot. The ending is left a bit untidy, making it more difficult to fully embrace any of the characters, though Chris is naturally sympathetic. The story may make you a bit uncomfortable, the characters may leave you wondering how the next act would play out, and you may even question your own assumptions. Stray Dog Theatre’s production is meaty, satisfying theatre that gives you plenty to chew on.