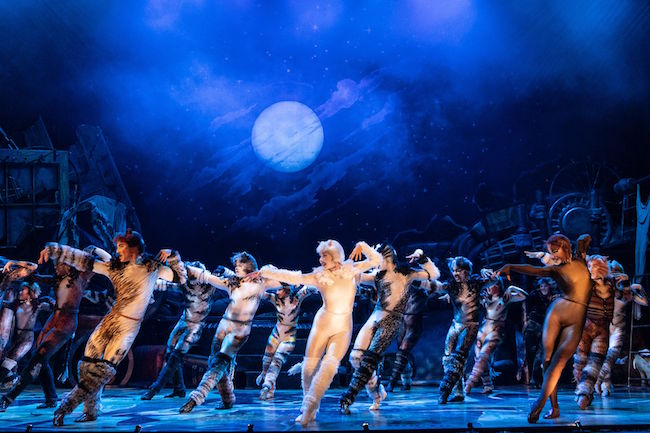 One of Andrew Lloyd Weber’s most successful shows, “Cats” remains a visual and musical treat. Based on T.S. Eliot’s “Old Possum’s Book of Practical Cats,” the whimsical production is one that every musical theater fan should see -- at least once. And the current touring show on stage at the Fox Theater is an energetic bit of fun that does the original Broadway production proud.

The Tony award-winning spectacle is filled with music and dance that offers a plethora of distinct personalities and a few truly memorable songs. We meet the cats as they gather to celebrate at the Jellicle Ball and to learn which cat will be chosen to ascend to be reborn in the next of their nine lives. A sense of celebration and ceremony fills the air with anticipation that’s only marred by the possible arrival of the dastardly McCavity the cat.

The threadbare plot enables a parade of cats, each with their own distinct habits, attitudes and quirks. Manifested through movement, choreography, makeup and costumes, as well as the script interpretation, the songs describe Eliot’s cats and Weber’s score plays with the rhythm of the language. The musical is a performer’s showcase. It’s the cats themselves, their songs and their personalities, that brought us here, after all, and the current cast pounces on the opportunity to play these almost iconic characters.

Tayler Harris is the once regal Grizabella and she brings the conflict between her memories of her younger self and the reality of her tattered her later years to life with grace. She moves with uncertainty and hesitance, with a reservoir of strength saved for the penultimate refrain of “Memories,” the show’s signature song. Grizabella is complimented in duet by the plaintive, childlike voice of Brianna Kim as Sillabub. Kim’s light, airy soprano provides emotional and vocal harmony that creates a surprisingly authentic moment and may induce a tear or two.

Grizabella hopes Deuteronomy, a kindly and wise cat played with philosophic dignity by Indalecio de Jesús Valentín, will choose her. She fears the other cats may reject her before she has the chance to speak. Hyla May Rose Perillo (Victoria), Paul Giarratano (Mistoffelees) and Devon McCleskey (Munkustrap) immediately attract your attention whenever they’re on the stage, each is charismatic and Perillo and Giarratano are exceptional dancers, which is of key importance in the show. Zach Bravo (Rum Tum Tugger) and Christopher Salvaggio (Skimbleshanks) provide welcome comic relief, though the roles feel overplayed and a bit campy at times.

Technically speaking, the stage craft is clever and occasionally surprising. The shining cat eyes in the opening sequence are an attention-grabbing invitation to come into the world of cats. To learn a cat’s language and their names. To witness the moment of selection. Scenic designer John Napier, who also designed the production costumes, creates an environment with a cat’s sense of scale. Choreographer Andy Blankenbuehler fills the space with constantly shifting, graceful and athletic movements, slowing the cats for quiet moments, but never quite coming to a stand still. Except when it seems McCavity is near. The songs are lovely, with hints of the writer and composer’s other songs sprinkled in, and the dancing more energetic, athletic and integrated than you may expect when you recall “Cats.” The choreography is based on Gillian Lynne’s original work and while the dances are clearly refreshed, they remain faithful to the beloved Broadway show.

The current production of “Cats,” continuing through January 2, embraces the ensemble. Every element of the production reflects the tradition and spirit of the artists who first brought the show to life. And while there are no big surprises, there is the satisfaction of seeing a beloved show done faithfully and well. If your spirit or humor needs rekindling, the cast delights, inviting you to relax and enjoy the familiar antics, emotional pull and playful joy of “Cats.”