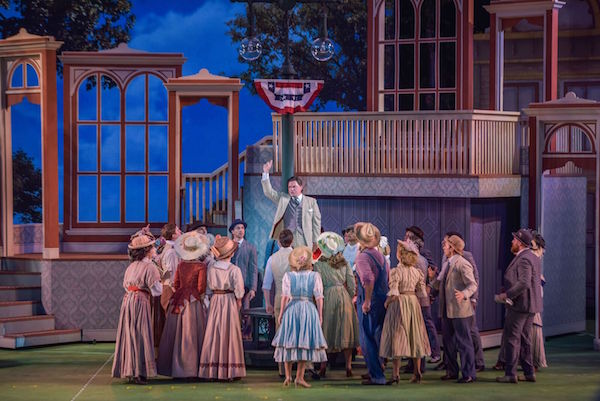 Pleasing and familiar, 'The Music Man' entertains, though it feels a bit off key

The MUNY in Forest Park celebrates Independence Day, and the charm of small midwestern towns, with The Music Man. A strong cast, stellar orchestra, and well-produced production numbers ensure that this popular musical provides a satisfying evening of entertainment, but everything seems a bit more subdued, and significantly less persuasive.

Early one summer in 1912, Professor Harold Hill, a con artist posing as a traveling salesman, dazzles and swindles the town of River City, Iowa with promises of turning the local boys into a sharply dressed marching band. He intends to take the cash and run to his next mark before delivery. He falls under the spell of the local librarian, a well-educated woman who sees through his act even as she begins to succumb to his charms. By the end of the show, the scoundrel is redeemed, the town is singing and playing in harmony, and a happy ending seems assured for all.

One of the best known and most frequently performed musicals, the show charms with simple, catchy melodies, and its tale of love and redemption is delivered by a town full of interesting characters. Patriotism, the meaning of character, and lessons of acceptance and understanding are liberally sprinkled in between the song and dance numbers. Truth be told, there isn’t a lot of substance to the story between the songs, though audiences may find some parallels to politics in the fast-talking, over-promising salesman’s pitch.

The MUNY’s production includes a number of memorable performances beyond the solid leads of Hunter Foster, as the irrepressible showman and con artist Hill, and Elena Shaddow as the kind, vocally blessed Marian Paroo, the Librarian. Director Rob Ruggiero takes a markedly different tact with the leading roles, and I’m not convinced it works. Hill is somewhat restrained and earnest, and Marian more stridently independent than in previous renditions, adding an unbalanced dynamic to the story that makes it more difficult to suspend disbelief and embrace the romance.

Mark Linn-Baker is endearingly funny as the town mayor, his many malapropisms delivered with serious aplomb. He’s expertly complemented by the gracefully comic Nancy Anderson as his delightfully preening wife. Liz McCarthy, Todd Buonopane, April Strelinger, Michael James Reed, Tim Schall, Allison Broadhurst, and Halli Tolland standout, as do Greta Leigh Clark, as Amaryllis, and Owen Hanford as Winthrop, the little boy with the big personality and comic lisp. But it’s the barbershop quartet of J.D. Daw, Joseph Torello, Adam Halpin, and Ben Nordstrom that nearly steals the show with wonderfully layered harmonies and textured interpretations of their songs.

The appealing ensemble adds significant humor and character to the show, often drawing attention from the leads. For the most part, this works in the shows favor, as it’s the ensemble pieces we all remember most. The rhythmic “Rock Island” and “Pick-A-Little, Talk-A-Little,” jubilant “The Wells Fargo Wagon,” energetic and poppy “Shipoopi,” as well as the rousing “Seventy-Six Trombones,” are highlights of the show. Shaddow has a clear, lilting voice, ensuring “Goodnight, My Someone” and “Till There Was You” are memorable, and Foster’s “Marian the Librarian” is full of spunk and flirtation. The crowd-pleasing quartet delivered the night’s knock out numbers, however, particularly the medley of “Lydia Rose & Will I Ever Tell You.”

Much like the interpretation, the stage and costumes -- with scenic design by Michael Schweikardt and costume design from Amy Clark -- were primarily subdued and bathed in pastel shades of green and peach. An equally shaded lighting design from John Lasister cast lovely shadows among the trees while complementing the production. Though visually gorgeous, these choices calmed the excitement and showmanship for which the production is known. Chris Bailey’s choreography was sharp and engaging but failed to wow, although I enjoyed the whimsical touch of marching the townsfolk in and around the set pieces as the turntable revolved.

Meredith Wilson’s tribute to small town America in the early nineteen hundreds is a pleasantly patriotic show filled with hummable tunes and high-stepping choreography that closes with the requisite seventy-six trombones filling the stage. While the show is thoroughly entertaining, I found the energy to be a little flat and the pacing a little off. Finally, though I appreciated the kinder, gentler approach to Professor Hill, the character lacked the charisma expected of the part and I left the show feeling underwhelmed instead of buoyant.