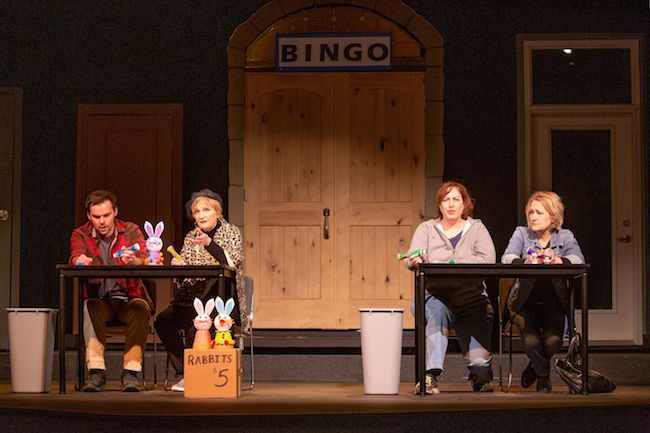 Sometimes, the place where a person is born defines who they are and how they see themselves. Sometimes, it defines how others view them. Other times, it’s just an address, a place to be from. For the hard scrabble, working class “Southies,” the neighborhood might be a purgatory they’ll never escape.

Stray Dog Theatre’s production of David Lindsay-Abaire’s compelling drama “Good People” is engrossing, discomfiting theater. The darkly comic show takes an intimate look at the tenuous bond so many of us have with the great American Dream. The neighborhoods that used to provide a tightly woven fabric of support now threaten to rip apart from the stress of simply existing. The show is tragically funny and perceptive, and the circumstances the story represents feel even more prevalent today than when the play first opened.

The residents of Boston’s Southie neighborhood are doing their best to eke by on minimum wage service and factory jobs. Margaret, a single mom with an adult special needs daughter to care for, looses her job due to frequent tardiness. The boss who’s firing her? He’s the son of a now-deceased long time friend. And he’d just like to get this over with. Margaret learns that a former flame from the neighborhood, now a successful doctor, is back in the area. With the courage of a few drinks and more than a little prodding from her best friend, Margaret decides to pay him a visit to see if he’s got a job. She’s desperate to find a new position, but unskilled and worried who will help care for her daughter when she’s at work. If she can find work.

Things don’t turn out as planned, not by a long shot. Rebuffed at every turn, Margaret plays on her audience’s sympathies, grabbing onto any chance to improve her situation with ferocious intent. Her friends offer horrible advice and her landlord, also a long time friend, regularly threatens what little security Margaret has. Many of these scenes are brutal, awkward and funny. They’re all “good people” at heart, they reason. They’re just doing their best to survive, even if it means hurting a friend. And no one, with the possible exception of the doctor’s young wife, is quite who they put on to be.

Lavonne Byers’ Margaret is the struggling working class personified. She’s a jumble of nervous energy and constant worry trying to put on a brave face when she’s honestly terrified. Living so close to the edge of poverty, she’s burdened by circumstances that aren’t nearly as hard for those with better resources and opportunities. She’s undereducated, underpaid, overworked and the very definition of patience stretched thin.

Byers shows us Margaret’s every layer and flaw without pity or excuse. Margaret might twist the truth and look for a better angle still, she’s honest and true to herself.  She isn’t always likeable, and frankly, neither are her friends. But they aren’t despicable or deplorable or unlikeable either. They are folks doing everything they can to stay, clawing and scratching, out of the downward spiral of poverty. There’s a grace to Byers characterization and plenty of sympathetic truth in Margaret’s story. Then, she turns on a dime, with desperation as fuel for manipulation, and your sympathy begins to wane. Byers’ Margaret takes the audience where she wants to go and we eagerly follow along.

The supporting cast proves they are, for the most part, up to the task of meeting Byers on her plane. Stephen Henley turns in some of his best work to date as the kind, soft-hearted Stevie. He’s a good man in a no-win situation who’s trying to help in his own quiet way. Stephanie Merritt is effectively cunning and loyal as Margaret’s best friend, even when she’s full of bad ideas. Laurell Stevenson shines as the genuinely kind, but not fooled, not even for a minute, wife of Stephen Pierick’s Southie turned successful doctor. She was raised in D.C., but quickly picks up on the neighborhood dynamic between her husband and Margaret, as well as some of her husband’s flaws. Familiar and always capable, Pierick and Liz Mischel round out the cast with committed, at times purposefully duplicitous performances. No one in the story is an angel, though Henley and Stevenson’s characters come closer than one might initially suspect.

The most noticeable flaws in this fast moving, deeply engrossing play, directed with sharp focus by Gary F. Bell, are the moments that pull the audience out of the story. Scene transitions that last a bit too long distract from the energy and flow the actors effectively deliver. Additionally, the sudden loss of an accent, or worse, the sudden switch from working class Boston to British, can be jarring. Particularly when an accent slip can so easily cause a domino effect among the cast. Hopefully, both the transitions and vocal consistency will improve as the show progresses.

“Good People” takes a look at a struggling, barely hanging on neighborhood in south Boston. The kind of neighborhood where expectations are low and jail stints and addictions are high. Margaret and her friends stretch their dollars, somehow managing to cover the necessities while hoping to get lucky at the bingo hall. No matter how hard they try, every turn seems to dig the characters deeper and deeper in their holes, stuck with the surety of the screw.

The characters aren’t charming, their tales are more ordinary than inspiring -- and that’s where the beauty lies in this painfully honest look at the have nots. “Good People,” continuing through February 26, is propelled by strong direction, riveting storytelling and committed performances anchored by Byers’ complex and nuanced Margaret. With plenty of humor and realistic, sometimes uncomfortable conflict, this drama pulls you in and sticks to you long after the curtain call.