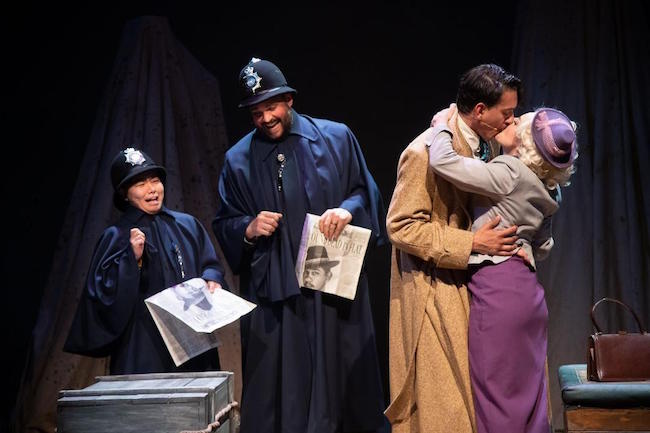 Stuffed with clever references to the films of Alfred Hitchcock and the physical humor of Monty Python, “The 39 Steps” at the Repertory Theatre St. Louis is one sight gag or turn of a phrase chasing another. All the way to the happy revelation that the mystery is actually a love story.

Suave bachelor Richard Hannay, played with the appropriate swagger and pencil thin mustache by Ryan Colbert, opens the show with a soliloquy about his unmarried state. After much lamenting, he heads to a vaudeville show featuring a man with an amazing memory. His enjoyment is cut short when a flirtatious and presumably dangerous woman enters the scene and takes the seat next to him. Chaos ensues at the theater, she ends up spilling her secrets and more, and Hannay is caught up in a global adventure as he works to avoid being framed for murder.

The mysterious woman warns Hannay about an enemy plot against the British empire. Before dying, she pleads with him to take her message to a reclusive professor, though naturally nothing is as straightforward as it first seems.

That’s part of the delight in the constantly moving comedy. Hannay meets a variety of characters, both shady and helpful, along the way, as distinctly characterized by the ensemble of Olivia Gilliatt, Jimmy Kieffer and Futaba Shioda. A number of quick transitions, under the brisk direction of Kate Bergstrom, reveal the craft behind movie magic while drawing plenty of laughter from the audience. Building tension, constant movement and set pieces that quickly convert in front of our eyes helps keep everyone completely engaged in the action on the stage. Even in those moments where the story itself seems to get a little hazy.

Most importantly perhaps, the show leans into absurdity and exaggeration, heightened by effective use of the turntable and visual puns. Some of the funniest bits take advantage of the considerable height difference between Kieffer and Shioda, which proves a boon to the script. There’s also plenty of over-the-top flirtation between Colbert’s matinee idol styled Hannay and whichever female character Gilliatt is playing at the moment. And that’s all good, because, while the story is filled with misdirection and movie references, it’s rather thin on actual plot or character development.

The biggest criticism, in fact, may be that the more one pays attention to the show, the less there is to it. This is the type of show one attends for pure enjoyment and the satisfaction of being thoroughly entertained without having to put too much thought or energy into following the plot. There’s a comforting repetition to several of the gags and, once the show finds its pace, it’s reliably funny. The script is stuffed with a plethora of references to the work of Alfred Hitchcock – although it’s ok if you don’t catch them all, the show is still just as entertaining.

After all, the raucous production is all in good fun and played for laughs from start to finish. Director Bergstrom, the capable and appealing cast and the artistic team at The Rep keep audiences engaged. Something is always happening somewhere on the stage and if you tune out, you might miss the punch line. The performers are in top form and find their rhythm quickly, with Colbert and Gilliatt driving the plot and action while Kieffer and Shioda executing one clever bit after another.

The pillars of 20th century British mystery and comedy collide in the madcap adventure “The 39 Steps,” by Patrick Barlow, continuing through April 10 at The Rep. The show is a romp through the most popular suspense films of the 1950s and 60s, with a dash of modern sensibility and a broad wink and a nod to Monty Python. Audiences of all ages are sure to find plenty of laughs in the high-spirited, quick paced action. And the bit about the mystery actually being a love story? I stand by my assertion. You’ll need to see the show to decide for yourself.