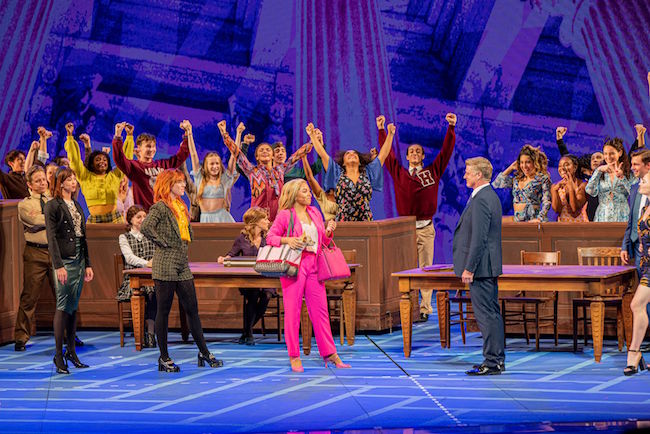 The irrepressible force of nature and sunshine that is Elle Woods lights up the Muny stage in a smartly re-imagined staging of "Legally Blonde the musical" that’s terrifically entertaining. The storyline from the much loved movie remains intact, things have just been freshened up a bit and the changes work well in the completely engaging and uplifting musical.

Instead of the Delta Nu sorority house, the musical opens in the sorority's backyard, by the pool. And it’s a sizeable pool -- in the middle of the stage with cabanas circling it. The sorority sisters swim, sunbathe and talk about Elle’s impending engagement to Warner. Elle’s canine best friend Bruiser bounds onto the stage, stealing the scene as the story that makes up in can-do positivity what it lacks in plausibility kicks off with an enthusiastic start.

The show moves at a fast pace, with choreographed set changes and a number of on stage quick costume changes, which is always a fun touch. Some familiar scenes are reframed and rewritten, and the updates work while keeping the story moving. The use of the “bend and snap” move effectively simplifies the plot twists. And pursuing Warner is less emphasized in favor of creating a better romance for Elle and Emmett. Your favorite fashion merchandising graduate turned Harvard law student still manages to overcome her own and society’s preconceived notions without losing her smile or her belief that girls should support each other.

Kyla Stone is near perfection as the bubbly, optimistic Elle, with fitting intonation and endearing reactions. She’s got a great voice and excellent control, pairing particularly well with Fergie L. Phillips’s Emmett Forest. The two have sparks right away and the chemistry is maintained throughout. Patti Murrin is endearing as Paulette, grounding the character with good-natured sensibilities that compliment Elle and they’re also vocally well matched.

Kelsey Anne Brown, Gabi Campo and Khailah Johnson are delightfully funny and well harmonized as sorority sisters and the Greek chorus (get it?), adding lots of good-natured humor and another winning twist in the refreshed musical. Dan Tracy, Kerri George, Olivia Kaufman, Sean Allan Krill and Hayley Podschun turn in strong supporting performances and Abigail Isom is particularly funny as the studious sorority sister Kate. Finally, the light but heartfelt script wouldn’t be complete without the inclusion of the adorable Ricky, as Bruiser, and Myrtle, as Rufus, under the guidance of William Berloni.

Maggie Burrows direction is solid and well focused on characters and relationships, which is evident through actors that are consistently present and engaged in the scenes. Tim Mackabee’s set design is inventive and surprising, with lots of little touches that add to the context of the story as do Leon Dobkowski’s nicely appointed costume designs. Kylee Loera’s video design is well integrated into the show, as is the sound design by John Shivers and David Patridge.

Music director Lon Hoyt keeps things moving crisply with well-integrated transitions. The show starts out with the upbeat and energetic “Omigod You Guys,” which really draws the crowd in. Tracy is appropriately smarmy and smooth in “Serious” while Stone’s interjections provide a pleasing contrast. Krill is positively shark-like in “Blood in the Water,” clearly defining his character with a hint of glee. Murrin owns the stage and has the audience in the palm of her hand during her featured song “Ireland.” “Bend and Snap,” “Take It Like a Man” and the titular “Legally Blonde” are thoroughly engaging and enjoyable ensemble numbers while “Find My Way/Finale” provides a little wisdom as it wraps up the show. Though no single song captures my heart, all the songs are fun and full of uplifting sentiments that follow the show’s emotional arc well. William Carlos Angulo’s sharp choreography has a similar effect; everything fits together seamlessly and is well executed without standing out.

Filled with enthusiasm and joie de vivre, the Muny’s production of  “Legally Blonde the musical,” continuing through August 1, is a perfect choice for a hot St. Louis summer. The updated show, with music and lyrics by Laurence O’Keefe and Nell Benjamin and book by Heather Hach, keeps all the sparkle and possibility of the beloved movie while making a few smart changes. Stone is fantastic as Elle Woods and leads a talented and amiable cast through the engaging musical. With the challenge of not one but two substantial floods earlier this week, simply getting the production on stage must feel like a significant victory for everyone involved. Seeing that “Legally Blonde the musical” is an enthusiastically upbeat, undeniably infectious and delightfully performed show makes this week a bonafide win-win for the venerable theater.