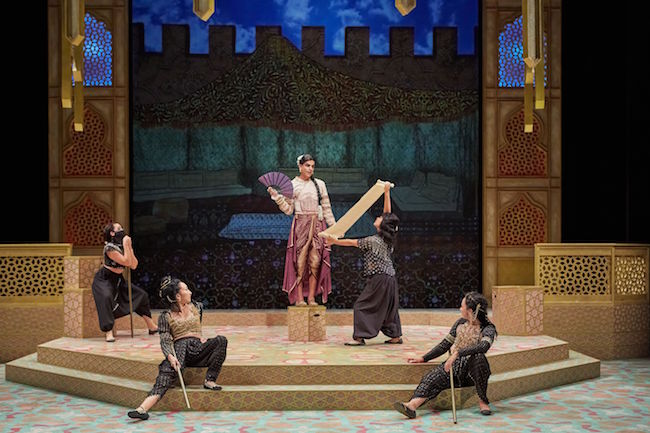 'House of Joy' at the Rep: Action, intrigue and romance with modern flair

The Repertory Theatre of St. Louis opens its season with the premier of Madhuri Shekar’s thoroughly engrossing and beautifully staged “House of Joy.” Thoughtful direction by Lavina Jadhwani and a strong cast fully realize both the romantic fantasy and the cautionary tale of greed and power that intertwine in the imaginative, action packed script.

In a land far away and, yet, somewhat familiar, the women of the court, including the emperor’s daughter Princess Noorah and young, now pregnant wife Empress Mariyam, live on and idyllic estate protected by an all-female guard. Known as the House of Joy, the estate has a degree of sentience and self-protection of its own – with the exception of the emperor, unaccompanied men cannot physically enter the grounds and the women cannot leave. Only those who are both male and female, such as Salima, may pass at will. Roshni, a new recruit to the guard, is among the few females who have experienced life outside the walls.

The play leads with Roshni’s story, her recruitment, training and eventual assignment to the personal guard of the empress and her child. Several other plotlines, including one centered on Princess Noorah’s greed and another on Hamida, Roshni’s closest friend and a life-long member of the guard who is devoted to the rule of the crown and reveres her commander Gulal. The tale is one of a secret coupe fueled by ambition intermixed with the empowerment and agency of women.

Tina Muñoz Pandya brings spirit and unbridled enthusiasm to the role of Roshni, her expressions and posture effectively establishing character before the first line. Pandya is complimented by Sumi Yu as the loyal, steadfast and still playful Hamida and Emily Marso as the naïve and overprotected Empress Mariyam. Aila Ayilam Peck is captivating and certain as the ruthlessly ambitious Noorah. Miriam A. Laube is blinded by her own better judgment as Gulal, the leader of the guard, Regina A. Fernandez is graceful and ethereal as the shape-shifter and Omer Abbas Salem is flawless in every way as the omnipresent soothsayer-like Salima.

The intrigue and interconnection of themes are mixed with plenty of action. There’s excellent fight choreography, by Aparna Kalyanaraman, video that enhances the scope of the story with gamer-like perspective, by Stefania Bulbarella, and well-integrated anachronisms and sound effects that emphasize magical realism. Even the approach to sexuality and desire is organically derived from the story, if a bit too suggestive for most audiences younger than 17 or so. The set design, by Dahlia Al-Habieli, and lighting design, by Sarah Hughey, are seemingly simple, but beautifully detailed. The costumes, by Oona Natesan, are simply gorgeous while still allowing freedom of movement, including in numerous fight scenes.

The production is not perfect, and the transitions and plot connections can be improved. This new play is a significant rewrite of Shekar’s original idea, and the script may benefit from some revision to enhance the depth of the fascinating story and character development. Overall, the play is full of intrigue and possibility, creating elements of surprise. The woman-centric plot and storytelling is welcome, particularly with the overlaying action and villainy that make for a captivating tale.

“House of Joy,” continuing through September 18, feels like the start of an action adventure series, with the comic book like appeal and potential for many worlds and plots. Shekar’s script is an evocative action adventure romance that plays with history and fantasy in inventive and enjoyable ways. While not every story gap is filled, if you’re like me, the intriguing cliffhanger ending will have you hoping for a sequel.