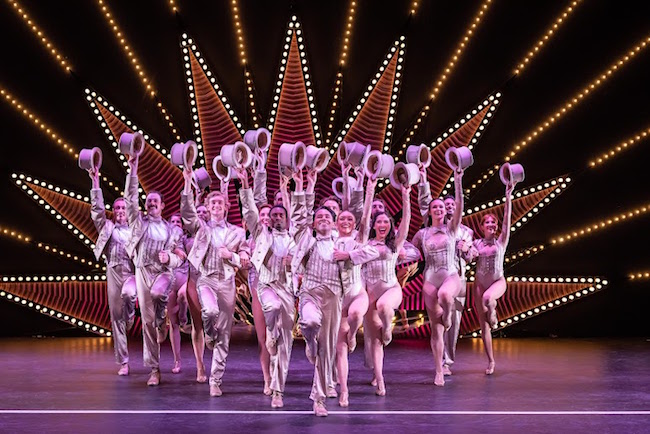 The 2022 season at Stages St. Louis comes to a close with an intimate and entertaining production of “A Chorus Line,” the perennial favorite that follows a group of dancers through an intense audition for a new Broadway musical. Directed by Gayle Seay with choreography by Dena DiGiacinto, this production puts the dancers’ stories in the spotlight to good effect.

Today is the final chorus auditions for a new Broadway show and, at the musical’s open, the remaining hopefuls are learning a new routine to be performed during the next round of cuts. The following scenes take us through rounds of learning new choreography and demonstrating their abilities interspersed with personal revelations, also delivered in song. Zach, the choreographer casting the show, paces the aisles, throwing questions to the performers from the dark. Occasionally he re-appears on stage, but the audience mostly hears and feels his presence. The show begins with 24 chorus hopefuls; by the final curtain only eight remain.

Director Seay, the cast and production team emphasize the humanity of the story, that near universal need to belong and be part of something. To, perhaps, be known for something. As importantly, though the stories are individual, the focus here is the ensemble. Smart casting, direction and stage craft, as well as a tight pace, keep the show also moving forward to it’s inevitably bittersweet conclusion. Eight will leave elated and 16 will leave looking for the next audition spot, wondering what they could have done differently. The beauty of Stages' production is that, show to show and with the possible exception of Cassie, the chosen eight could be any of the 24 and we would believe it. Capable as each performer is, the ensemble matters here and Seay, DiGiacinto and music director John Samorian seamlessly turn our attention and sympathy from character to character.

The songs are all good, but not perfect, reinforcing the fact that this ensemble is auditioning to be the chorus -- a uniform, harmonized and always in-sync backdrop and support for the stars. The all-company numbers are lively and the solos engaging, but there wasn’t one song or performance that stood above the others. The dancing is equally solid and enjoyable, but not perfect, which feels true to the setting of the show. This production feels more grounded in reality and realism than hope, though everything comes together in the exuberant and sparkling finale.

The songs have a familiarity to them. Even if you’ve never seen “A Chorus Line” before there’s a good chance you know at least a few of the tunes and the ensemble delivers them with solid skill. “I Can Do That,” gets a lift with some nice athleticism in the choreography, “At the Ballet,” is gentle, reverent, emotionally and vocally textured. “Dance: Ten: Looks: Three” has the flirtatious, humorous bite you expect, Cassie’s solo dance, “The Music and the Mirror,” is flowing and fluid, a pas de deux for one. “Nothing” and “What I Did for Love” are filled with emotional weight and “One: Reprise” is the splashy, flashy, Broadway finale you are anticipating from the first note of “I Hope I Get It.”

The original directly inspires this production’s direction and choreography, as well as the costumes by Brad Musgrove and lighting design by Sean M. Savoie. Frankly, the scenic design, by James Wolk, is clearly influenced as well. That reverence helps make the show a crowd-pleasing favorite we want to watch again and again; it also makes it more difficult for individual productions to stand out. Personally, I’m ready for some fresh choreography and arrangements, updated pop-culture references, and a different twist on the familiar tropes. Still, I can and do appreciate this well-executed copy. “A Chorus Line,” continuing through October 9 at Stages St. Louis, elevates the storytelling in a way that hits the right notes while remaining faithful to the Broadway original.