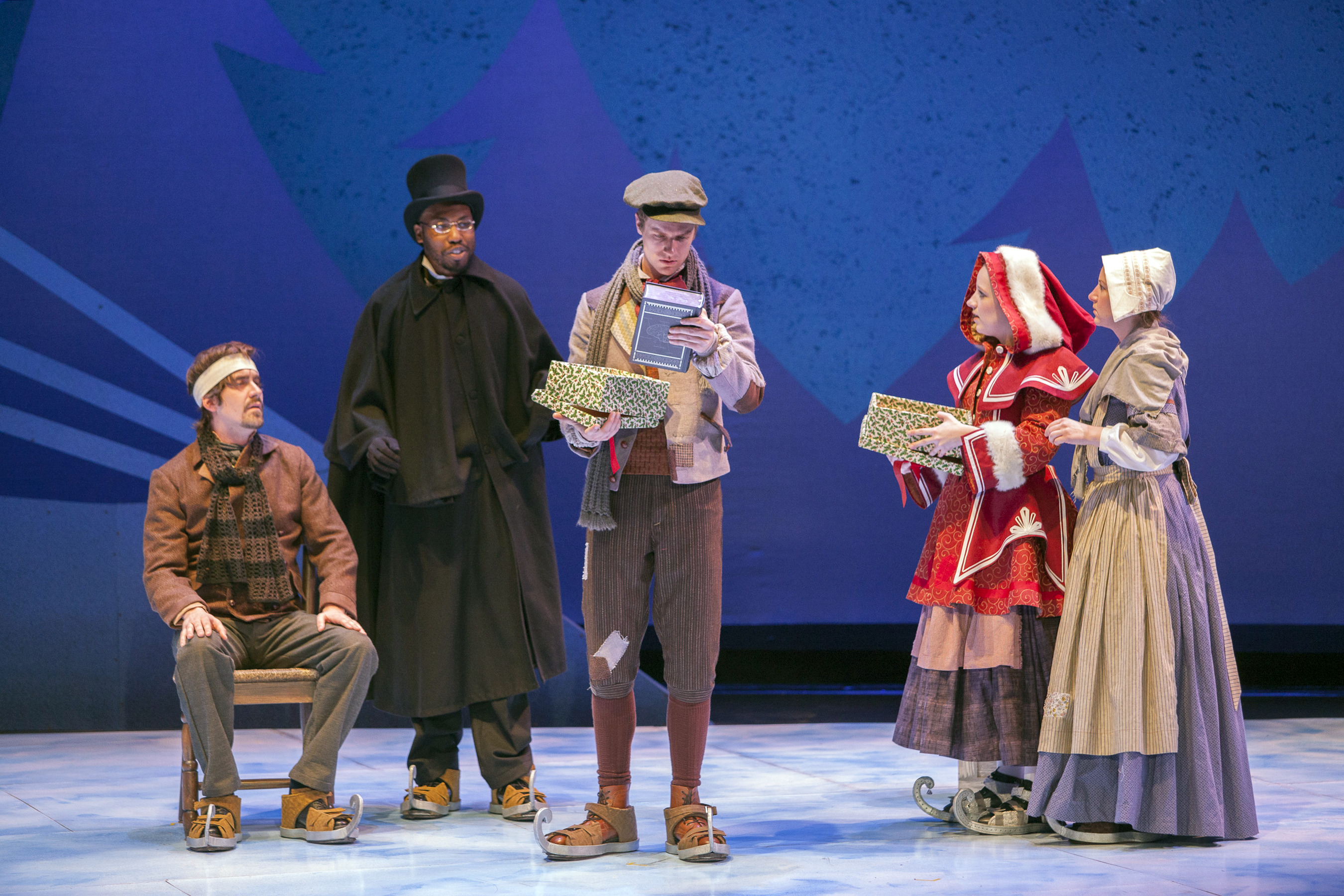 Metro Theatre Company’s take on the traditional Dutch tale is heartwarming and spirited, with sympathetic performances from a talented cast and a set design, costumes, and staging that expertly recreate the period and the sensation of skating. Under the direction of Julia Flood, the actors embody relatable characters that are well defined and clearly deliver the tale’s lessons. Though not children, the ensemble capably captures the essence of pre-teens and young teens, how they can be cruel and kind, curious and frightened all at once, making it easy to accept each in their role.

Since their father’s accident, Hans and Gretel Brinker are too poor to attend school and spend their days scrounging for pennies, their only escape gliding across the frozen canals on homemade wooden skates. As the eldest, Hans works tirelessly to support the family and protect Gretel from teasing, but at times his pride gets in the way of genuine kindness. Hans must learn to ask for and accept help in order to turn the family’s luck around.

Pete Winfrey and Sigrid Wise are thoroughly engaging and relatable as Hans and Gretel, with an easy chemistry that suggests close-knit siblings. The two are physically and verbally expressive, precisely capturing the frustration and eager hope of growing children. Hans understands more of the family troubles than Gretel, and his efforts to shield and protect her are touching. Erika Flowers-Roberts is charming as the kind Heidi, while Antony Terrell, Erik Lindsey, Jennifer Theby-Quinn, and Spencer Sickmann are distinct in multiple supporting roles, and Roxane McWilliams provides live musical accompaniment that adds a touch of nostalgia to the show’s positive tone.

The simple set pieces are easily switched out, creating transitions that keep the young audiences interest and director Flood ensures the story moves forward with lots of energy and action. One of the biggest challenges of the show, from both a technical and acting perspective, is recreating the sensation of skating that is central to the story. Designers Lou Bird, David Blake, John Inchiostro, and choreographer Jamie McKittrick create an inviting and visually compelling environment as well as the actors’ skates. The results are impressive as the actors glide, race, and spin across the stage with ease.

There is a lot to follow in this play. The show slows a bit at times, to allow for the exposition, and younger children may get a touch lost in the layers. Additionally, while true to the original story, the search for the family’s hidden treasure feels unnecessary for this retelling. There are several more important elements to this story, as Hans has to swallow his pride as well as give others a second chance if he is to succeed in his quest to save his family. While finding hidden treasure is always good, the lessons learned are the elements of the play that really strike a chord with audiences.

Hans Brinker and the Silver Skates gives young audiences a show that entertains on multiple levels while providing enjoyment for every member of the family. Targeted to students in the 2nd through 8th grades, the show incorporates familiar themes, offering positive solutions without becoming heavy handed. Produced by Metro Theater Company and in performance at the Grandel Theatre through December 30, the traditional tale delivers several lessons through well-crafted storytelling, music, and a few surprising special effects.