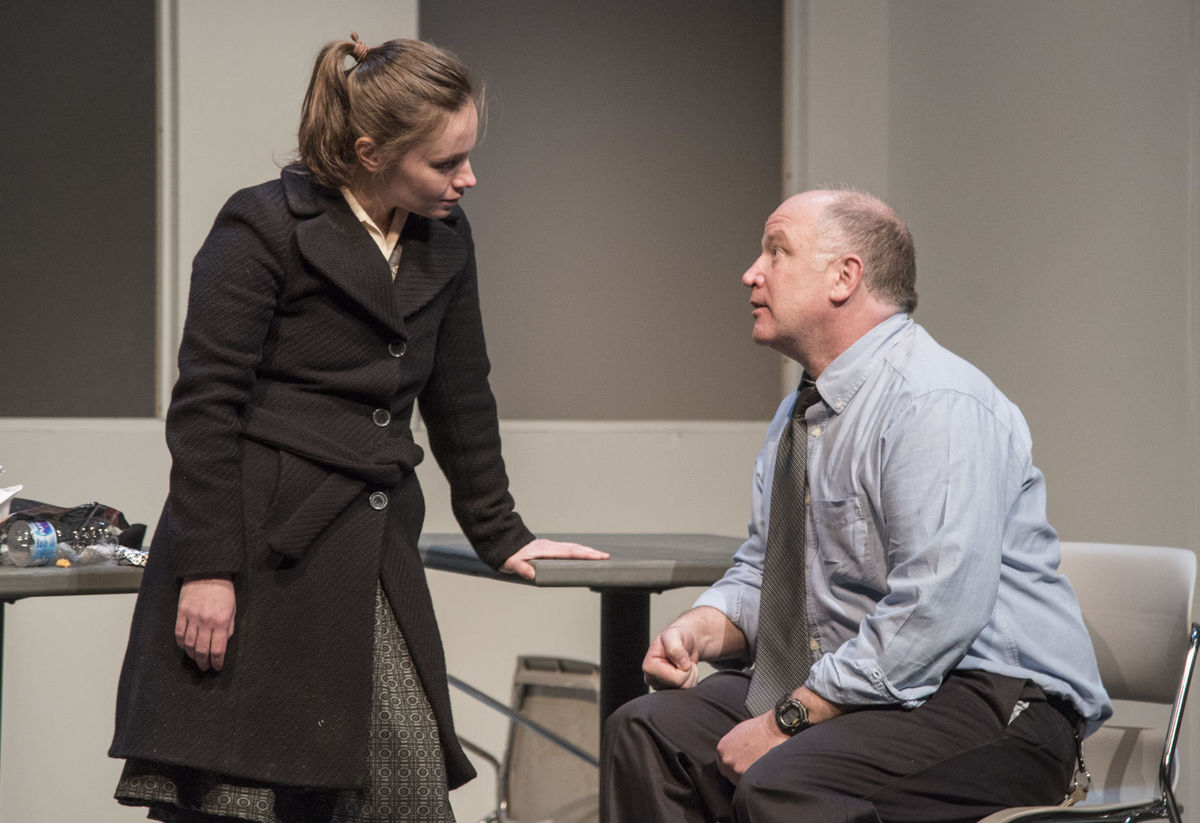 St. Louis Actors’ Studio once again demonstrates a willingness to fearlessly tackle sensitive subjects with the potentially triggering “Blackbird.” The provocative look at the resulting trauma from an incident of pedophilia is surprisingly non-judgmental while still forceful in context and tone. An unflinching cast and clear direction by Annamaria Pileggi ensure the show is dramatically compelling if, at times, emotionally unrelenting. The company’s publicity and program materials include a trigger warning, as the subject matter is treated with brutal honesty and lingering questions reveal unresolved feelings.

Ray and Una had a predatory sexual relationship when Una was 12 and Ray was 40. Now, more than 15 years later, a photo in a magazine has spurred Una to track Ray down and confront him regarding the incident. Their tense reunion takes place in the garbage-strewn break room where Ray works and it is immediately obvious that Ray would rather not see Una. He is, in fact, more than a little resentful that she had the temerity to track him down. Naturally, the two have very different memories regarding their past and it soon becomes quite clear that neither of them have fully recovered, no matter how much Ray protests to the contrary.

Ray has changed his name and moved hours away from the town where the two met. He says that he’s doing well and has successfully put the past behind him and created a new life for himself. Una confesses that her life has been miserable, revealing just how conflicted and confused the incident left her. She also shows lingering signs of Stockholm syndrome, her demands for answers becoming increasingly intimate and desperate. Their interaction is emotionally and sexually charged, which may cause additional discomfort for some audience members, but it feels authentic and motivated. Nothing you see on stage this year, however, may make you quite as uncomfortable as the last few scenes.

Elizabeth Birkenmeier and John Pierson are mesmerizing as Una and Ray. While our sympathies are firmly aligned with the young woman’s pain and confusion, Pierson gives Ray an everyman demeanor that’s likeable from moment to moment. His character has achieved a high level of self-delusion and rationalization, and it’s almost believable, though his actions during the closing scenes belie every word he’s uttered to that point. Birkenmeier is emotionally raw, seething with anger and regret, clinging to a memory that she can’t stop reliving and spiraling downward into a heightened state of agitation. It’s unclear if she’s tracked Ray down to extract vengeance, but her reaction to seeing him in person after so many years causes her thoughts to spill forth with unresolved emotion. Part of her desperately wants to move forward and forget the incident, to believe that it is a part of the past. Another part desperately thinks she loves Ray and that perhaps all will be well if he returns her affection.

Playwright David Harrower’s script is well structured and the dialogue realistic, adding depth and context to a difficult subject matter. There is no point in the show when sex between a minor and an adult is presented as normal, but there are nonetheless plenty of questions raised. One of the more powerful aspects is the way the script reveals the victim’s care after the incident. Ray, the perpetrator, was sentenced to prison where he received therapy and, once his sentence was served, he was free to rename himself and build a new life in a new town. Una didn’t fare as well. As a child, she continued living in the same community with constant reminders and public shame the only response she received. With its ending twist, “Blackbird” calls into question our moral responsibility to Una and other young victims and potential targets.

The St. Louis Actors’ Theatre show is intended for mature audiences and the subject matter may be too much for some audience members to take in. The show is frankly disturbing and offers no easy answers, but it is exceptionally well acted and produced. Ray doesn’t seem like a despicable man, he initially disarms even Una. But, as too often happens in situations of control and abuse, nothing is quite what it seems on the surface. Anchored by strong, motivated performances, “Blackbird,” running through February 25, is provocative and disturbing art.