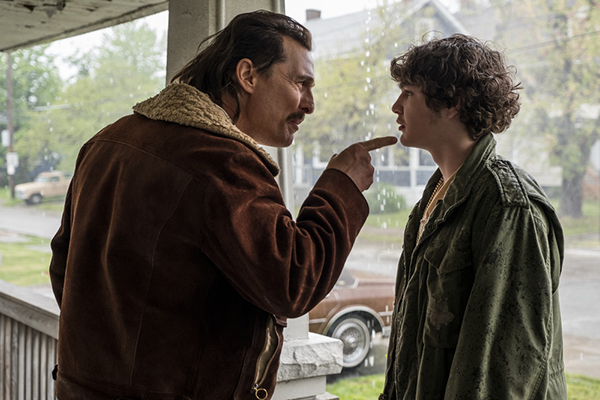 In mid-1980s Detroit, with few, if any, prospects for a comfortable life, Rich Wershe Sr. deals handguns and AK-47s. To keep his father from prosecution, 14-year-old Rickie gravitates to drug dealing, soon pressured to work as an FBI informant. Rickie balks, quits and then starts up on his own, selling the African-American community in which he is accepted.

This leads to the media dubbing him White Boy Rick, a designation he hates, as arrests and legal proceedings follow in surprising and appalling developments. Though this sounds like a familiar drug dealing drama, director Yann Demange avoids the clichés in a narrative based on a true story. Moreover, "White Boy Rick" is also about a father and son, family ties, exploitation, and the dead-end world Rick confronts. It gives nothing away to say that events reveal the myriad ways unjust mandatory sentencing laws, intended especially to decimate the African-American community, destroy lives

At this year's Telluride Film Festival I attended, Matthew McConaughey spoke passionately about the prison and paralysis of poverty, about children not allowed to have a childhood or a chance. He described Rick, his father and his grandparents living in nostalgia for the past and hope for a future that eludes them. McConaughey described meeting Rick in person, talking with him several times, now 30 years in prison, Rick never playing victim. Every miscarriage of justice is tragic. This time it is abhorrent as "White Boy Rick" compellingly communicates . At area cinemas.