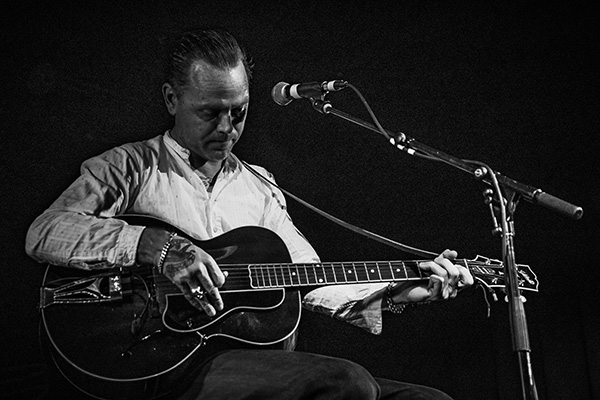 Nashville-via-Australia songsmith C.W. Stoneking is on a solo tour of the United States. He will be headlining a show at The Duck Room at Blueberry Hill on August 30. Stoneking is also scheduled to stop by KDHX for a Listen Live in-studio performance and interview session starting around 3 PM. The session is scheduled to be broadcast live on 88.1 FM. You can catch a behind-the-scenes look at the session as it streams live on the web, as well.

DJ East Side Slim, host of Rhythm Highways, found Thursdays, 5-7 AM, caught up with Stoneking as he returned to Nashville from a vacation in Australia and spoke with him about his unique blend of music genres, as well as what to expect at his show this weekend.

East Side Slim: Well, hello. We've got C.W. Stoneking with us today at KDHX. It's a pleasure to have you, C.W.

CW Stone King: How you all doing?

C.W. is on a tour right now across a good part of America, and he's coming to St. Louis, Friday, August 30th playing over at world famous Blueberry Hill. That'll be The Duck Room over there on Delmar in University City Section of the St. Louis area. C.W., how long is this tour going to be lasting for you?

This particular run is ... it goes about six weeks, I reckon.

That's a pretty good run. People may have noticed, if they're not familiar with you, they may have noticed you don't sound like you're from St. Louis. C.W. Stoneking is from Australia. I'm wondering: are you touring out of Australia, or are you spending a lot of time in the States now? Are you living here?

I'm based down in Tennessee, in Nashville.

There's a lot of people doing that these days. That's for sure. Are you out by yourself this time around, or what should the people expect?

This tour is just a solo tour. They got me... playing a pretty sort of wide selection of my songs from a different arrangement.

Oh yeah. Well, that'll be a wonderful show. You have an opening act, or is it the whole show yours this time around?

I did ask about some people to open for me, but I haven't actually communicated with my booking agent about it yet – found out if that occurred or not.

There was some people I was wishing would open, but yeah -  I couldn't tell you for certain what's happening with that.

Okay. Well, good enough. People may have a very pleasant surprise when they go to the show. You get C.W. Stoneking and then you may have one of St. Louis's real talented folks on the bill as well. And that'd be alright.

Well, I'm not sure how to generalize your music. Describe it for the folks. If you had to tell people who maybe are not familiar with C.W. Stoneking's music, as I am, and KDHX certainly is. We hear a lot of your music. But how would you tell the new person to your music what they might expect to hear?

Well, if you're talking about the records, I guess you could say... generally, I write my songs. I guess the influence comes through like old '30s Caribbean music, New Orleans jazz, Delta blues, Ragtime, Hokum blues, stuff like that. A bit of yodeling happens here and there. You know... the instruments should resonate, the guitar and stuff like that.

Well, I guess it moves right on in until early rock n' roll and big gospel music. It's a wide spectrum and stuff that I listen to. You know, little touches of that sort of come through on all different aspects of what I do. As far as a live show goes, it's all of those things. Some of it's more hinted at, with only having the guitar there. I've done my very best on songs where there's big horn arrangements to arrange that fit in as much of that music as I possibly can with my two hands.

You know, it sounds like old music but it's all new stuff.

Are you working on any new recordings? It's been a little bit since "Gon' Boogaloo" was officially released. Anything new stirring or in the works?

I'm working on new songs, but I ain't started recording any yet. I'm just still doing the thing that I do.

It seems to work. From all the information I read the last few days, you wrote all the material on your albums... with a lot of accolades coming your way and a lot of high praise. I'm thinking you're being very humble. You're doing something right, C.W.

Well, it's a long process for me. I don't think I've yet found the the good process for writing songs. Hopefully one day I'll learn before I'm 80-years-old. Learn how to make a record a year like other folks seem to manage to do.

Well, I'm not so sure a record a year is always a good idea. You know what I'm talking about... I mean, until it's ready it just ain't ready. You know?

How long have you been out now on this tour?

Well, the St. Louis show is actually the first show of this tour. Right now, I'm just down in Nashville getting ready for it. I've been using other guitars for the last year. But there's this new thing I got...

Oh yeah? What's that? What'd you get ahold of? What are you going to be using for the guitar?

I picked up an L-5. I live one block from a guitar shop, which is a really dangerous place. Made it a bit close to me.

I go for a little walk or something after having my coffee, and the next thing I know I'm spending like $10,000 on a guitar... or something.

Well, we've all got our demons, right?

Oh, that's beautiful. Beautiful guitar. Well, people get down to the show and they're going to be able to see that live and in person. Matter of fact, even better, they're going to get to hear it. That'd be a real treat because that's something you do not get to hear every day out and about. That's for sure. There anything else you'd like to visit with us about? Anything else you've got going on? Anything special, or –

Well, I can look... I'm a little bit jet lagged, so my brain is kind of beat down... I'm living in Nashville, but I've been back in Australia. I just got back yesterday. I just took a two-week trip.

You probably have a reason to be a little jet lagged. If only it was only just yesterday, for sure. Well, even more so we appreciate your time today. I'll tell you what, I won't hang onto you real long here. Just once again, thank you so very much. C.W. has been through before to St. Louis, but it's not often. Living in Australia makes it hard to come back on an extreme regular basis.

I believe we have you scheduled for an in-studio. I think it's on Friday just prior to the show, if I'm not mistaken.

Oh, that would be beautiful. You'd done that once for us before, but it's been quite a while ago. We are looking forward to having you in.