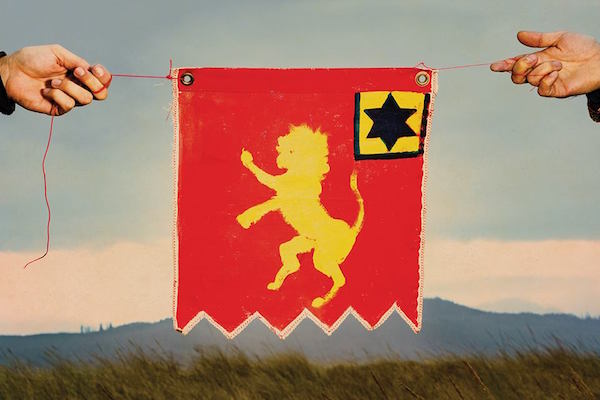 Album Review: Blind Pilot's long-awaited 'And Then Like Lions'

Portland's Blind Pilot -- at the Ready Room on Friday, September 30 -- have returned after a five year hiatus with their third album, And Then Like Lions. The band is now on ATO records after self-releasing their first two albums but they've kept to the same blend of folk and rock. If the melodies and songs weren't so well-crafted, you could imagine hearing the band at a coffee shop playing covers of James Taylor. Happily, the music of Blind Pilot transcends the genre.

Much of the five year wait for the new album was due to leader, singer, and songwriter Israel Nebeker's personal travails -- the end of a 13 year relationship and the passing of his father.  The impact of personal loss has not lessened the beauty of their music but enriched it. Simplicity still remains the major strength of the band, which is no surprise since the band is well-known for touring via bicycle early in its career.  At that time, the band consisted only of Israel Nebeker on acoustic guitar/vox and Ryan Dobroski on drums -- now it's a six-piece.

The songs of And Then Like Lions may not be as immediately tuneful as their debut, but the melodies burrow into your soul before long. "Moon at Dawn" opens slowly with light drums, vibes, and an acoustic guitar and builds to what for Blind Pilot is a hair metal solo, namely a lively singalong song that can cause goose bumps to break out all over your arms. This is perfect turntable music -- the nuances and subtleties of the music lift and lilt, push and pull, and otherwise keep the listener waiting with bated breath for the next move.

The album's closer "Like Lions" uses animal references and lyrically saturated verses to provide a statement of the America they know: "Will they buy even our breathing / a river strangled by a dam / less than one percent are taken / so tell me who dries up this land." Lines like these give us a sense that the band sees outside of Portland.

"Don't Doubt" provides the emotional core of the album. Musically, it hearkens back to the sounds of their debut, with the acoustic guitar, vibes, and muted trumpet leading the listener to join the band in a wonderful rabbit hole but expresses the impact of the personal tragedies Nebeker has dealt with this year. "Don't you doubt / everybody's seen some winter / don't you take the dark way out" could be a mantra he uses to keep his chin up and keep producing this great music.

In short, Blind Pilot has released another great album, well worth a listen even if they don't break any new ground musically. They will play the Ready Room with opener Quiet Life this coming Friday, September 30.