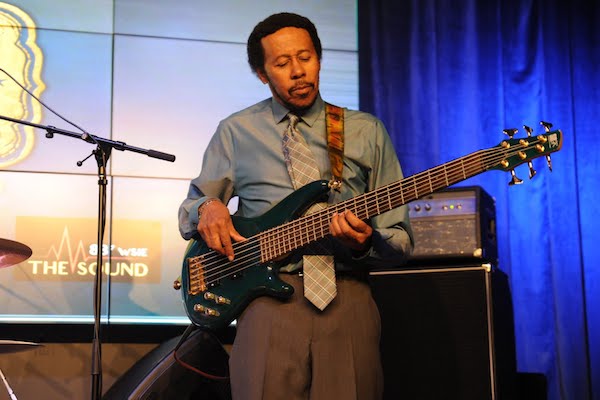 When Gus Thornton's Momma showed him the Christmas catalogue he told her he wanted the $3 Lone Ranger and Tonto guitar. Little did he know then that nearly sixty years later his choice would lead him being on the Legends Stage at the National Blues Museum with David Dee where both were honored for "Keeping the Blues Alive."

The September 8, 2017 recognition event was part of the museums Howlin' Friday show that featuring George Brock who received the first "Keeping the Blues Alive" award last April. Dion Brown, Executive Director of the NBM, says: "We started this award as a way to recognize the invaluable contributions of our local musicians to blues music. At the same time, we recognize it takes more than a front person to keep the blues alive and we intend to honor those folks too." Gus Thornton, Marquise Knox's bassist and one of premiere players in the country, provides a perfect example.

Thornton isn't a frontman, never has been. But he is a bass man and in Marquise Knox's words "a bedrock, my bedrock." His longtime bandmate in Kim Massie and the Solid Senders, guitarist Steve Martin, agrees: "Bass players in general don't get credit. They're in back. That's the way it is. But, you sure notice when they're not there because the bottom falls out. The bass is the glue that holds a band together." B.B. King knew that. His daughter, Shirley King, says, "Look at the pictures. My Daddy always kept the bass player next to him. He said 'the bass was the most important instrument for keeping the music together.'"

Influenced by Memphis, Motown and the Beatles on their home radio, Gus's career started out with living room concerts with his brothers and sisters and writing a song, "Cincinnati Blues." The only problem was the guitar wasn't tuned properly, he didn't know how to play and he played it upside down. By middle school, a real acoustic guitar, picks, and Webb Pierce and Homer and Jethro albums became part of the self-learning process. Gus says, "I learned hip country music." Lessons from Dan Jones at Sonny Shields music store in East St. Louis also helped.

An attempt to play in the junior high l band didn't work out. They didn't need guitars. He was told he didn't have an embouchure for trumpet. He wanted to try sax but they said he would have to learn clarinet. "Clarinet," Gus says, "No way I was doing that. The clarinet section was all girls." He quit the school band and looked for other outlets.

Playing with friends became one of those outlets but when they went to form a band there was a problem. Like most kids they all started out on guitar so they found themselves with three guitars and no bass. Gus became the bass volunteer picking out the notes on four strings of his guitar. Turns out it was a pretty smart move.

The other outlet was a gospel group he joined at 14. The Illinois Special recruited Thornton, who when he told them "I'm not that good," responded "that's okay, we'll teach you." And they did according to Gus: "They helped my ear out by having to listen to harmony, the lead singer and understanding changes and how to hear them."

From Young Disciples to Albert King

The road to Thornton's success came in 1968 during high school when the auditioned at the South Side Center in East St. Louis for the Young Disciples. This legendary model cities program (1967-72) was developed by Allen Merry a woodwind player who had toured or recorded with Curtis Amy, Ray Charles, Hank Williams Jr., and Little Richard. It was designed to help keep kids off the streets in the troubled times of the late '60s but it became much more. It became an opportunity for kids to tap and develop their talents in a mini Motown.

Merry exposed kids to all kinds of music. Thornton says, "We got it all -- Motown, Memphis, Big Band -- I saw Stan Kenton, Ray Charles, James Brown and more." The 80 members of the Young Disciples had multiple singing, dance, music groups and even a comedy act. They learned how to perform, book shows, manage, wire equipment, start a record company, and make records even booking time at Sun Studios in Memphis.

Gus's first record credits come from those days as he performed as part of the rhythm section backing up various groups like Primes, the Primettes (after the Motown groups), the Debonaires and the Debonettes, The Georgettes, the Gents and the Meditations. It was an exciting time that included teenage friends like Renee Smith, Marsha Evans, and Sharon Clarke all of whom later worked with Oliver Sain.

The Disciples came to an end in 1972 and Gus took his Fender Precision to form his own band, F Troop and later the Free Spirit Band which included Oliver Johnson a horn player. Johnson got a job with Albert King's band ('75-'81) when that Free Spirit broke up. Thornton would go with him by to watch them practice. He had met Albert during the Disciple days. In 1977 King asked him to join the band for a West Coast trip. Gus thought, "I want to see California and there's knee deep snow here," so he went.

The rehearsals were cool but onstage everything went off the rails as Albert showed a side that many musicians had seen: "King was yelling at me onstage. I couldn't do anything right. He was saying, 'I'm gonna pull the trigger (fire him).'" By Chicago Gus thought it was over and he planned to quit but he says, "Albert got nicer the closer they got to home. So I decided to stay a few more weeks." It turned into years of traveling the US and Europe. He became close friends with King and another young guy who used to come and jam with them, Stevie Ray Vaughn. Those relationships would prove pivotal in coming years.

In 1979 another bass player, Frank Dauber, joined the band. He also was a bus driver, mechanic and brought his own band. Gus was appointed the road manager which taught him money management and booking skills but he became a part time player. He eventually left the band and came home. It turned out to be a good move. He began freelancing and found he had become established. Everyone wanted Gus Thornton. He had the chops and the rep after touring with one of the greatest blues talents in the country.

In 1983 Albert King asked him to return to the band. Again, what Gus thought would be a few weeks turned into years and three albums: San Francisco 83, I'm in a Phone Booth, Baby and In Session (with Stevie Ray Vaughn). Over the next two decades he would record with the best in the business including: SRV and Blues at Sunrise with Stevie Ray Vaughn, Two Fisted Mama with Katie Webster, two albums with Johnnie Jonson -- Blue Hand Johnnie and Johnnie Be Eighty! And Still Bad, and Can't Stop Now with Kenny "Blues Boss" Wayne. He has more than 25 albums to his credit with the new Marquise Knox release Black and Blue being the latest.

It was the early albums with King that Thornton says "taught me how to make real records by getting closer to the actual production and learning how to do professional photo shoots." He says "friendship with Albert and Stevie, jamming with Stevie's band and meeting other famous musicians" are all part of his special memories of those times.

You Gotta Have Heart

Thornton is a guy that gets all the good adjectives -- nicest, kind hearted, sweetest, friendliest, calm, cool, laid back, easy going, effortless, encouraging, etc. Marquise Knox says that every time he tells Gus "you're too cool," Gus says, "No, I'm just careful."

He has a soft spot for young musicians like Marquise when he was a kid and the up and coming Matt "The Rattlesnake" Lesch. Matt was star struck when Knox invited him to sit in with the band four years ago. "I knew Gus was the guy on In Sessions and I still watch it. I asked him for an autograph and he asked me for mine. We have stayed in touch ever since."

Don't let the descriptions fool you. There is a tenacity and focus in his seemingly effortless playing style and as Steve Martin puts it a personal "strength in the face of diversity." St. Louis saw the latter when he suffered a stroke onstage at the 1996 Big Muddy Blues Fest. When the EMT's arrived Gus realized, "I couldn't tell them where the pain was. I couldn't talk. I couldn't point. Half my body was paralyzed." Their quick actions helped save his life. However, it was the beginning of a long journey to a 2011 heart transplant.

Today he works in support of heart research. One of his fellow transplant patients who works with him is an old Disciples alumnus, Sharon Clark. They have played fundraisers together to raise money for the research. He also remains close to the family of his heart donor Anthony "Tony" Mather.  Just prior to appearing at this year's Big Muddy he held an emotional reunion with them in Wisconsin. Thornton is still overwhelmed and grateful to St. Louis Blues Society Mission Fund and the blues community for their support though his heart related health issues.

Gus came back from the transplant to rejoin the Kim Massie and the Solid Senders. A couple of years later Marquise Knox asked him to become part of his band. He had known and admired Gus since he was a kid. Gus had encouraged him because he wanted to pass the torch and keep the blues alive. It was a great match. The band, which includes Matt Lawler (guitar) and Michael Battle (drums), all say, "we are a family." They look out for Gus on road trips making sure he gets the appropriate rest and has comfortable arrangements for long drives.

There is a symmetry in seeing Thornton with Knox. Gus started as the talented young guy playing with the old pro, Albert King. Now the tables are turned. He's the old pro working with the talented young gun. Their love and respect for one another was obvious on the Legends Stage. As Knox puts it at the ceremony: "Gus is living history. He is a legend and it is time he got the recognition he deserves. I hope I'll be as good as a man as those I've learned from, David Dee and Gus Thornton."

There was a lot of blues history jamming on stage following the ceremony. Gus and David Dee joined George Brock for a rousing rendition of B.B. King's "How Blue Can You Get." Then Marquise came up taking Matt Leach's guitar for "Two Trains Running (Still a Fool)" and "Walkin' the Dog" while Ben Wells, Tommy Bankhead's drummer, kept the beat. Gus was there playing his style of "being in the groove, not getting in the way," and loving every minute of it.

Yes, it was a night to be remembered for a guy who has contributed mightily to "Keeping the Blues Alive" in St. Louis. Gus's humble response to the evenings accolades was to recognize his partner, Lisa Carr, his family and to offer up these words: "I have always tried to treat others the way I would like to be treated. It would be a better world if we all treated each other that way." Amen, brother.

Click below to see Bob Baugh's photographs of the event. 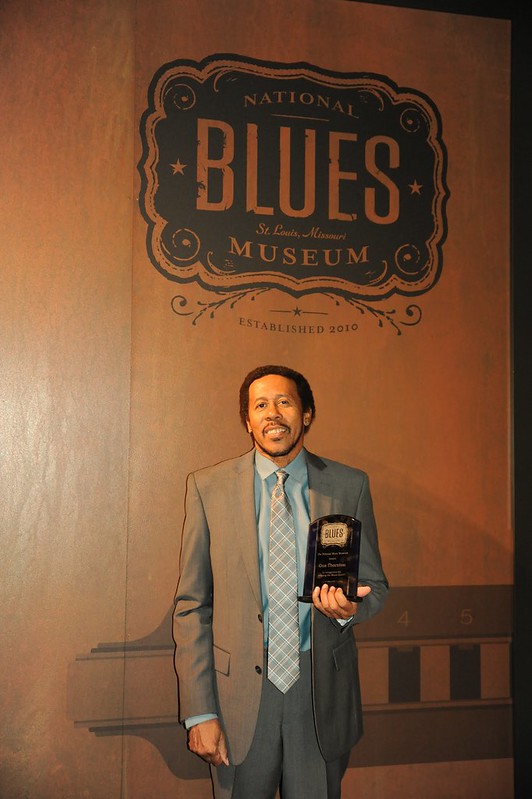