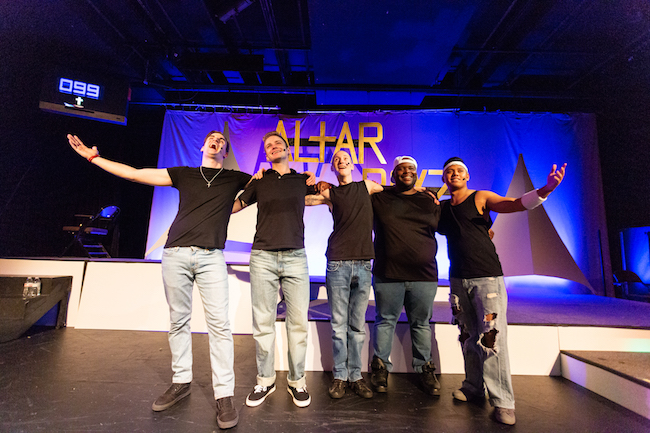 Riley Dunn, Clayton Humburg, Kevin Corpuz, Marshall Jennings and Corey Fraine are Matthew, Mark, Luke, Juan and Abraham – five young men who sing, dance and praise their way through life as the "Altar Boyz." In St. Louis for the final concert on their American tour, they are determined to reduce the number of burdened souls showing on their Sony DX-12 Soul Counter to zero by the end of the night.

Such is the set up for the musical “Altar Boyz,” written by Gary Adler and Michael Patrick Walker, with book by Kevin del Aguila. The concert-style show introduces audiences to an Ohio-based Christian boy band that uses pop music hooks, dance and fashion to share the good word. The show adroitly pokes fun at contemporary Christian music, manufactured bands, and the use of sensuality – and at times overt sexuality – to sell everything from personal care products to beverages to church.

The story, which is ultimately about love, acceptance and friendship, breezes its way through 13 pop-influenced songs. The melodies are catchy, with humorous lyrics about waiting for sex, dedicating your life to Christ and how to behave in church. Some of the lyrics have a bit of a bite to them, such as “who needs a G.E.D.? I got my B-I-B-L-E,” but most of them are either over-the-top funny or surprisingly sincere. What makes the show work so well is strong direction from Elizabeth Wurm, spot on late 1990s choreography from Jordan Woods and the strong vocals and genuine connection between the five men on stage.

Dunn is compelling as the leader, and he revels in the attention. He flirts with the audience and has the very sincere believability of the best home shopping network salesmen, but with real likeability. He and Fraine share many of the lead vocals, and Fraine uses his range to great effect. Fraine also brings a sincerity of purpose to his role, embracing the idea of being a proudly Jewish boy who really digs Jesus Christ. Humburg delights as the conflicted Mark, his infatuation with Dunn’s Matthew humorously apparent. Corpuz is equally full of fury and the need to be liked as Luke, and he once again shows his lyrical prowess. Jennings brings a soulful voice and tenderness to Juan, ensuring he’s sympathetic and the audience cares about him.

As the show continues, we start to learn more about each of the boys in the band. Dunn seems like the golden boy, the one for whom everything comes easy, but even he wrestles with a few demons, mostly around his pride. Both Humburg and Fraine share stories illustrating how it feels to be different from the others, not quite fitting in as easily. Juan’s story about wanting to find his parents is authentically touching, even when his tears are excessive and exaggerated for comic effect, you still feel sympathy for Jennings winning portrayal. Luke has issues with anger and substance abuse, and Corpuz reveals multiple levels here. You know he’s a troubled guy but it’s just as clear that he wants to be accepted and embraced for who he is. Plus, they’re a boy band that’s been performing together since high school; differences, issues and insecurities are bound to bubble up.

The set, by Devin Lowe, is relatively simple, but the backdrop with its futuristic emblems, bright colors and bold “Altar Boyz” marquee effectively suggests a stage, particularly when accented with Ryan Shepard’s lighting and Peter Gunn’s sound. Music director Joel Hackbarth and band provide solid accompaniment, filling the theater space with sound that amps up the excitement, similar to a music venue.

The “Altar Boyz” aren’t perfect, they’re just five guys trying to figure out what they believe and find their place in the world, and there’s authenticity in that story. Though the songs will keep you laughing, there are plenty of genuine questions and day-to-day realities addressed without judgment. With pop melodies like “Church Rules” and “The Calling” interspersed with positive messages like “Everybody Fits” and “I Believe,” the show offers a variety of contemporary music styles with cleverly turned lyrics. The actors are engaging, with humorous dance moves and well-matched voices, ensuring “Altar Boyz,” from Silhouettes Productions Company and continuing through July 21, is an engaging and lighthearted evening that might just lift your spirits.