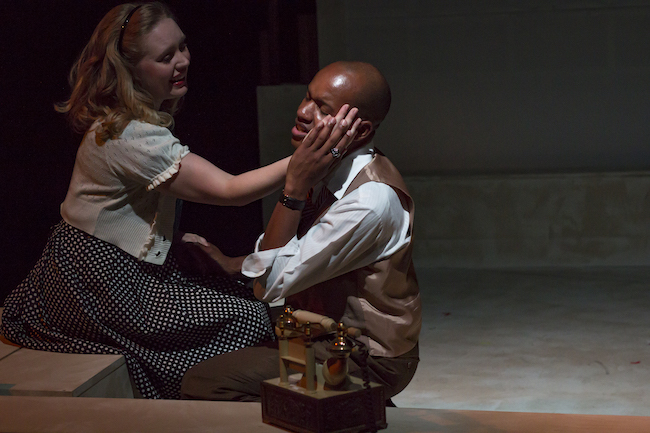 R-S Theatrics production of “The Light in the Piazza” is lovely gem of a show that finds a silver lining in a bittersweet tale of parental and romantic love. With an almost ethereal score that has the complexity and interest of a light opera and a charming village square as romantic a setting as they come, the story is gently compelling in a way that lingers well after the final curtain call.

Clara, a young woman in her twenties, and her mother Margaret are on vacation in Italy when Fabrizio spies Clara across the piazza near the shop his family owns in Florence. Clara sparkles with enthusiasm and awe, and he is immediately smitten with the American girl. Much to the chagrin of Margaret, the two begin a slow but deepening romance despite the fact that Fabrizio’s English is minimal and Clara’s Italian sparse. You see Clara has developmental challenges that aren’t visibly apparent, which makes her mother even more protective and cautious.

As Clara falls deeper and deeper in love, Margaret tries to pull her away from the young Italian, going so far as to flee with the girl to another city. Mother tries to comfort the girl, thinking she’ll soon forget about Fabrizio, but Clara is miserable and refuses to be cheered by her usual comforts. The two women must negotiate their relationship and Clara’s potential future, but twists and revelations make the outcome uncertain until the very last scenes of the engrossing show.

Macia Noorman and Kay Love are captivating as Clara and Margaret. There’s genuine warmth between the actors and each adds a splendid voice to a well-motivated character. Noorman’s Clara radiates with joy and the blush of first love; but she’s easily confused and frequently erupts in temper tantrums when she’s overwhelmed. Love’s Margaret worries with concern about her daughter’s future, wondering what kind of life the young woman can reasonably expect, with an endearing and wistful loneliness of her own that seems to surprise her and convincingly connects with the audience.

Tiélere Cheatem proves an ideal romantic pairing with Noorman, their voices and personalities complementing each other and their chemistry palpable from the first moment he spies Clara across the piazza. Each is a little shy but completely drawn to the other, leading to heartfelt confrontations with a touch of naïve courage. As importantly, Cheatem’s Fabrizio seems blissfully unaware of Clara’s condition but as instinctively caring and protective of her as mother. In a powerful scene, Clara chooses to run to Fabrizio instead of Margaret in a moment of fearful turmoil. While Noorman and Cheatem become immediately engrossed in each other, Love watches in stunned silence, revealing her surprise in a heart wrenching progression of doubt, anger, fear, realization and uncertainty. Without words, and in a matter of seconds, the three actors encapsulate the emotional arc of the show in a beautifully wrought scene.

Kent Coffel, Stephanie Merritt and Michael Lowe add much as Cheatem’s meddling and passionate if sometimes less than faithful family, while Jodi Stockton is delightfully humorous as his mother. Merritt terrifies Clara when she expertly pounces on “The Joy You Feel,” but she later embraces the young woman as a sister, recognizing the truth in Clara’s consistent if inexperienced heart. The ensemble is strong and involved, adding interest and texture to the fully human story and ensuring there’s not a dead moment on stage.

Sarah Nelson, who fully understands the constraints of the theater space, leads the band with confidence, creating a soundscape that enhances the moody songs, and Terri Langerak on harp is a welcome addition to the effective score. “The Beauty Is,” “Say It Somehow,” “Let’s Walk” and the title song are standout numbers, but the entire show is tender and touching, with uncertain emotional turns and gorgeous songs.

Cecily A. King’s choreography is smart and appropriately subdued yet constantly moving without distracting from the story, and Ashley Bauman’s costumes convey the same understated polish, emphasizing character and period. While the stage design by J. Keller Ryan is somewhat simple it successfully conveys the idea of a busy piazza frequented by locals and tourists, though I do wish the projections were a bit more distinct as they are somewhat washed out by the stage lights and a too thin screen.

Director Christina Rios guides the show with deft skill, and the result is characters that are more sympathetic and nuanced than in any other version I’ve seen. The story is as much about Margaret’s changes and self-reflection as it is a romance about a developmentally challenged young woman and unsuspecting young man. Love ensures that we care about Margaret as much as we root for Clara and Fabrizio, generating warmth and cautious optimism.

One of the delights in this production is the restraint of the characters, particularly Clara and Margaret. Too often a character like Clara is played with melodramatic flair and her mother portrayed as cruel rather than anxious. In reality, the issues Clara faces are frequently invisible to the naked eye and only revealed to those who are closest to her and Rios and the cast succeed in expressing this truth in ways that resonate as authentic. R-S Theatrics version of “The Light in the Piazza,” continuing through August 26, draws audiences into the story with lovely music and a realistically bittersweet and persuasive story.