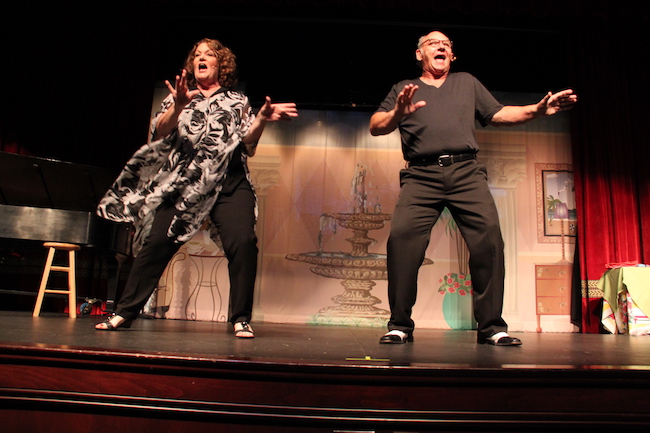 Getting older is an inevitability for most of us, but that doesn’t mean life has to be boring or lonely. Just ask the residents of Pelican Roost, a retirement community that’s designed to make the most of your twilight years. That simple premise is the basis for the genial ‘Assisted Living the musical,’ at the Playhouse at Westport Plaza. Written and performed by Rick Compton and Betsy Bennett, with Jeremy Franklin Goodman on the keyboards, the musical comedy is, thankfully and humorously, more about finding a second wind in life than skilled nursing care.

Two of the more memorable recurring characters are a slick-talking lawyer with a “trust me” catchphrase and jingly phone number and the local real estate agent, who upgrades her living situation with each new husband. There’s also the senior who definitely shouldn’t be driving anymore, a couple extolling the virtues and freedom provided by their walkers, another memorable character that is timidly dipping her toe in the waters of online dating and a Catskills-styled comedian with groan-inducing jokes. Whether you find your grandparents hilarious, are caring for a parent or staring at your own retirement, there’s a plethora of recognizable seniors in the 75-minute show.

Clever songs make light of the realities of aging, from the love struck  “Help I’ve Fallen for you and I can’t get up,” to the merry excesses of “The AARP.” There are tunes about spouses finding ways to occupy their free time without driving each other crazy, funny bits about keeping up with the latest technological fads and acronyms, and odes to dentures and steak night, and a rebellious little ditty extolling the pleasures of driving well past an age you should. There are also a few comic looks at past regrets, like “the Tattoo,” and a silly piece about hypochondriacs, too.

Bennett and Compton are clearly quite comfortable with the characters and there’s an obvious bond of trust between the seasoned actors. Their friendly chemistry, dotted with flirtatious bits, makes for a generally pleasant show, but perhaps the two are a little too comfortable with the material and each other. Some of the bits feel rote and tired, as well as a little too obvious and, though each actor is quite expressive, their performances will benefit from paying attention to little details, like the consistency of the accents they use for supporting characters. Compton would also benefit from better awareness of the size of the room he’s playing to; at times his reactions are way too big for the intimate space, causing him to mug the audience in ways that may wear on your good humor. Finally, the lively show lacks a satisfying storyline, though it successfully plays out as sketch comedy, with plenty of song and dance thrown in for good measure.

“Assisted Living the musical” pokes a lot of fun at the typical challenges of aging without ever becoming bitter or snarky, and Compton and Bennett seem to genuinely enjoy the material, their camaraderie and audiences. There’s a bit of casual audience interaction that’s to be expected in a show that’s part musical, part cabaret, and the actors hang around afterwards to chat with the exiting crowd near a table offering CDs and other merchandise. The lighthearted, relatable and funny musical continues through August 11, and the show is well attended so advanced ticket purchase is recommended.