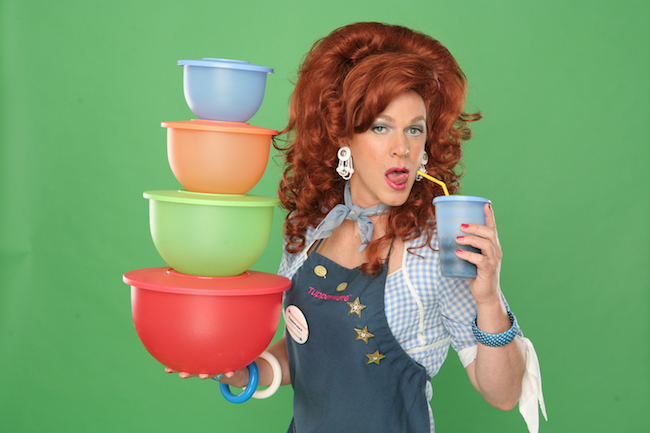 ‘Dixie’s Tupperware Party’ is a sales pitch filled with laughs, southern fried sass and a heart of gold

Dixie Longate, everyone’s favorite tipsy Tupperware® representative, brings her plastic fantastic party to the Playhouse at Westport Plaza for an entertaining bit of self-promotional theater. Dixie is folksy and vivacious, with a quick sense of humor that tends towards the bawdy. She’s also a single mom and determined businesswoman with an aspiration to be Tupperware’s top seller one of these years (she’s made it as high as the second top seller).

And, lest you think this is just a show, Dixie and the catalog, order form and pen on your seat, will quickly change your mind. Before the first sales pitch, for the rectangular cake carrier that can be flipped and converted to a cupcake or Jell-O shots carrier, we’re introduced to two other Tupperware products near and dear to Dixie’s heart – the faceted candy bowl and the always-practical tumblers with lids. Dixie’s enthusiasm is a big as her personality, creating an abundance of energy that somehow helps the audience to relax and enjoy the show. With a nod and a wink, Dixie will add that an adult beverage will speed up the process, and you won’t waste a drop if you pour that drink into your lidded tumbler cup.

Shortly after World War 2, Wise was introduced to Tupperware products and quickly realized that demonstrations were the best way to introduce the product to American housewives. Ignoring the skeptics, she started organizing and hosting Tupperware parties. The rest, as they say, is history, as Wise was appointed an executive of the company, one of the first women to hold the position. Dixie uses Wise’s story as both motivation and self-affirmation, which is key to her charm and central to her message. Just as with her own story, Dixie emphasizes how Wise succeeded and stood out, despite being disregarded because of her gender. The message here is that, no matter your circumstances, you will get further if you go ahead and believe in yourself. You may not be the luckiest, smartest or prettiest, but you are strong, capable and enough.

The humor is fast and furious and ranges from jokes about her own unfortunate past and children, to mispronunciations of major religious holidays that are not part of the protestant faith, to sharp observations on human nature that push the occasional button. Though her humor veers into uncomfortable territory at times, and I encourage her to rethink the race-based jokes in particular, Dixie is never pointedly mean or unkind, quite the opposite in fact. She comes across as a genuinely positive and caring person who wants to make sure that everyone in the room has a good time and hears that they matter.

Loud and thirsty, as well as sexy and proud, Dixie Longate isn’t for everyone, but she definitely brings the laughs, topped with a generous splash of alcohol and personal positivity. With a heart big enough to overcome her faux pas and sharp, timely and bawdy humor that leads to a genuine message of personal empowerment and positivity, “Dixie’s Tupperware Party,” continuing through November 24 at the Playhouse at Westport Plaza, Dixie brings the party -- and the Tupperware, too. If you don’t mind innuendo and flat out dirty jokes, as well as a general skewering of social convention, you may find yourself laughing all the way through the purchase of some new Tupperware.