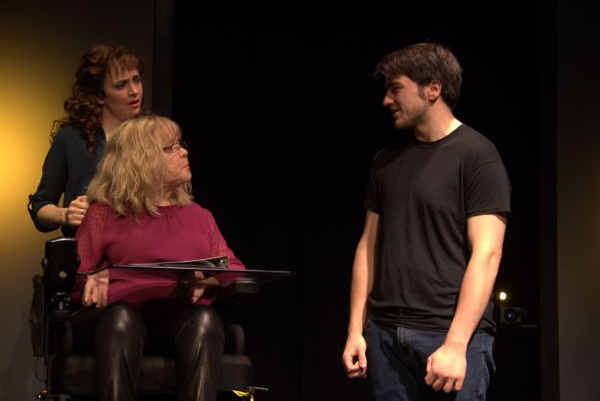 Black Mirror's 'Roll With It!' rolls through a range of emotions in compelling autobiography

Black Mirror Theatre Company has returned to the stage with a world premiere production starring and co-authored by its subject. “Roll With It!” is a highly personal look at writer, speaker, and disability activist Katie Rodriguez Banister's life and relationships with family, friends, the world, and herself. It's an inventively staged production that tells a fascinating story, even if it could use a little bit of editing.

The stars of this production are unquestionably Banister, who plays herself and co-wrote the script with Michelle Zielinski, and Hannah Geisz, who plays Katie Before the Accident, who sticks around with Katie while her life story plays out in the form of vignettes, flashbacks, and commentary. The car accident that changed Katie's life and left her paralyzed from the chest down is the major inciting incident, but the main subject is Katie herself, as she learns to deal with her own issues not just stemming from the accident, but also relating to her relationship with her parents, her own self-image, and more. The play also recounts her recovery from the accident, her lawsuit of the company that made the car she was riding in on that fateful day, her involvement in theatre and in disability education and activism, and her meeting the man who would eventually become her husband--Steve Banister, played by Tyler Gotsis. Ultimately, though, the story is about Katie coming to terms with herself, and learning to accept the earlier version of herself along with who she becomes. This aspect is inventively portrayed through the device of having two "Katies" who not only act out events as they happened, but who also directly interact with one another, wrestling with their issues in a visual, visceral way that forms most of the compelling drama, and humor, in this production.

The two main performers are both excellent, portraying a full range of emotions and interacting with energy, intensity, and credible emotion. They are supported by an ensemble of supporting players (Kelly Ballard, Dennis Calvin, Gotsis, Kristen Hayes, Hannah "Mo" Moellering", Claire Sackman, Luke Steffen, and Rob Tierney), who each play a variety of roles including friends, colleagues, family, doctors, nurses, lawyers, and more as Katie's story plays out in a series of scenes. For the most part, the staging is compelling, although there are some uneven moments, and a few "backstory" moments that could be explained more clearly. Still, Banister's story is fascinating and compelling, and this play reflects that reality well.

Technically, it's a simply staged show with some memorable projections by director J. Michelle Rebollo, as well as excellent lighting by Ryan Luedloff and sound design by Banister and Rebollo. Overall, “Roll With It!” is a promising new work that features a pair of impressive performances and tells a remarkable and fascinating true life story.  Performances of Black Mirror’s “Roll With It!” continue through October 23rd at the Kranzberg Center in Grand Center.