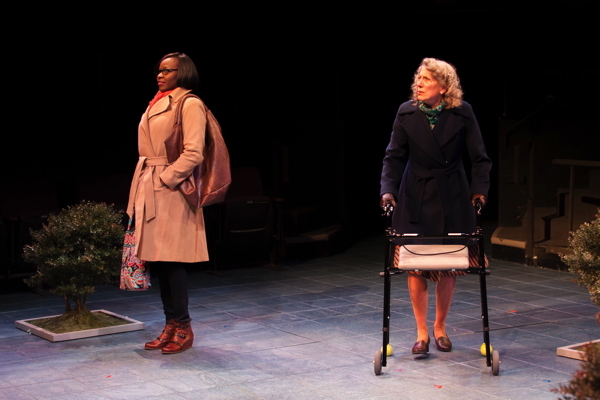 At the Humana Festival, comic coincidences abound in 'This Random World'

One of the great pleasures of the novels of Charles Dickens is the often comical way in which he arranges for characters from very disparate walks of life to be connected, often by wildly improbable coincidences. In Steven Dietz's new comedy, This Random World, the veteran comic playwright stands that convention on its head.

In Dietz's anti-Dickensian story, characters who are already related to each other, however tangentially, repeatedly miss making connections as a result of coincidences that are as unlikely and comical as anything the great British novelist ever dreamed up.

As the play opens, Scottie -- in her 70s and ailing, but still energetic -- is preparing for a trip to the Shimogamo Shrine in Kyoto with her assistant and general dogsbody Bernadette. Bernadette convinces Scottie to send Bernadette's younger sister Rhonda instead, but events conspire to force a last-minute cancellation on Scottie's part, sending Rhonda to Japan on her own. Meanwhile, Scottie's daughter Beth, who believes her mother to be a shut-in, has taken off on an adventurous and expensive trip of her own to Nepal where, because of a missed connection, she is thrown together with Gary, a new-agey life coach and the ex-boyfriend of the outrageously neurotic Claire, who is the ex-girlfriend of Scottie's son Tim.

As for Tim, he's a failed writer and computer hacker whose already off-track life is sent into a genuine tailspin when his prank hack of a mortuary's server results in the publication of his own fictional obituary. His attempts to explain to Rhonda -- who just happens to work at said mortuary -- that he is actually alive prove to be as funny as they are frustrating.

I could have used the word "coincidentally" a lot in those last two paragraphs but you get the idea. As the characters' lives spin merrily out of control, the connections that might get them back on track are repeatedly missed in absurdly unlikely ways. In one scene, for example, Bernadette just happens to leave her cell phone behind in a hospital waiting room at exactly the point when Beth, who just happens to have lost her cell, is calling from a pay phone to find out what's going on with Scottie. As the phone rings, Tim just happens to walk in. He answers it just as Beth impatiently hangs up.

Apparently, the phone just happens not to have voice mail.

Not all of the missed connections are funny, of course. Dietz is too smart a playwright not to throw in a few scenes that are genuinely touching. And those scenes work because, with the possible exception of the absurdly unhappy Claire, his characters are all well drawn and believable.

The actors do well by these characters. Brenda Withers's Beth is as confident as Nate Miller's Tim is lost and perennially baffled. Beth Dixon is an appealingly feisty Scottie, nicely contrasting with Shirine Babb's patient Bernadette. Todd Lawson's Gary is perfectly clueless and Deonna Bouye's Rhonda is hilariously motor-mouthed. Dietz has made the role of Claire fairly one dimensional, but Renata Friedman makes her interesting nevertheless.

Dietz's script calls for a set that suggests "a world that is warm, mysterious and evocative" and designer Daniel Zimmerman has certainly delivered that. Director Meredith McDonough keeps the action focused and smoothly flowing among the play's many scenes.

This Random World is essentially a one-joke play, but the variations on that joke are so ingenious that it never goes stale or wears out its welcome, remaining thoroughly entertaining right up to the surprising final scene. Given its relatively simple technical demands, I'd expect it to start appearing on other regional stages in the coming years; it certainly deserves to be seen.

This Random World runs through Sunday, April 10 at the Bingham Theatre at the Actors Theatre of Louisville as part of the 40th Humana Festival of New American Plays.