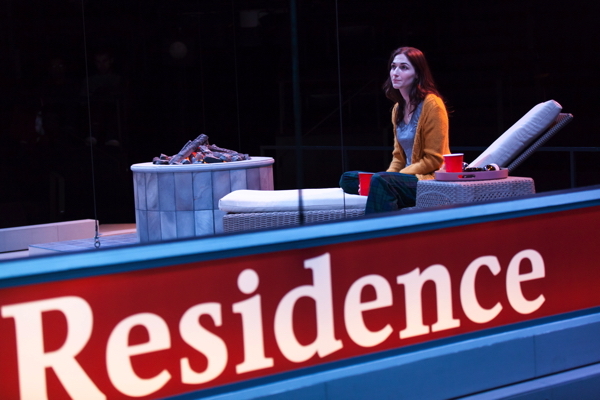 At the Humana Festival, 'Residence' chronicles an age of anxiety

The poor are a frequent topic of American political discourse, receiving compassionate concern from the left and righteous hatred from the right. But our shredded social safety net has left the middle class in precarious straits these days as well -- a fact which, while not discussed overtly, is nevertheless a recurring theme in Laura Jacqmin's comedy/drama Residence.

As the play opens Maggie, a new mom, has just checked in to an extended-stay hotel (the "Residence" of the title) in Tempe, Arizona. She's selling a portable ultrasound system to local doctors, hoping to earn enough in commissions to get her family out of debt and her life back on track. In the process she encounters Bobby, the hotel's all-purpose "gofer" and Theresa, the ambitious manager trainee determined to give her a "five star experience."

Bobby and Theresa couldn't be more different in some ways. He's a slacker pothead avoiding commitment with his ex-girlfriend and she's a perky college student determined to get ahead at pretty much any cost. And neither of them appears to have much in common with Maggie, who just wants her life to be less crazy.

As the play progresses, though, it's clear that what unites them is that they're just one bad break or wrong choice away from personal and economic disaster. That constant sense of life on the high wire gives Residence a sense of dramatic urgency, even while individual scenes are often extremely and very believably funny. Sometimes they're even a bit of both, as in the alcoholic seduction scene between Bobby and Theresa, which suddenly turns confrontational when Theresa realizes Bobby has a daughter with his former girlfriend.

As is so often the case at Actors Theatre of Louisville, the cast of Residence is impeccable. Leah Karpel and Alejandro Rodriguez play off each other beautifully as Theresa and Bobby, and Danielle Slavick makes Maggie impressively sympathetic -- not an easy task, given what a very disturbed person Ms. Jacqmin has made her.

Avery Glymph shows considerable range as all of Maggie's doctor clients plus husband Ben, who appears only via Skype. And Amelia Workman is on stage all too briefly as Bobby's ex Nita. She's an intriguing character, but the script makes her something of an enigma. It's not at all clear what she sees in Bobby, who simply can't seem to find a way to take his life or responsibilities seriously.

In fact, the sketchiness of nearly all the characters is one of the script's major weaknesses. The principals are not quite shallow enough to be simple stereotypes -- although Maggie comes perilously close to being little more than a psychiatric diagnosis -- but neither are they fleshed out enough to feel entirely real.

In addition, the issues raised in Residence are, perhaps, a bit too specific to our current social and economic situation here in the USA to have much resonance beyond it. I think this is likely to be one of those pieces that perfectly captures a particular moment in time and then quickly fades.

Still, it's a well-made piece overall, with a shrewdly observed critique of the petty ways in which those with a little bit of economic power seem compelled to throw their weight around and make life miserable for the rest of us. Barbara Ehrenreich described that phenomenon in detail in her 2001 book Nickel and Dimed, but it is perhaps time for a reminder. And Hal Brooks's sharp direction serves the play well.

Residence runs through Sunday, April 10 in the Bingham Theatre at the Actors Theatre of Louisville as part of the 40th Humana Festival of New American Plays.