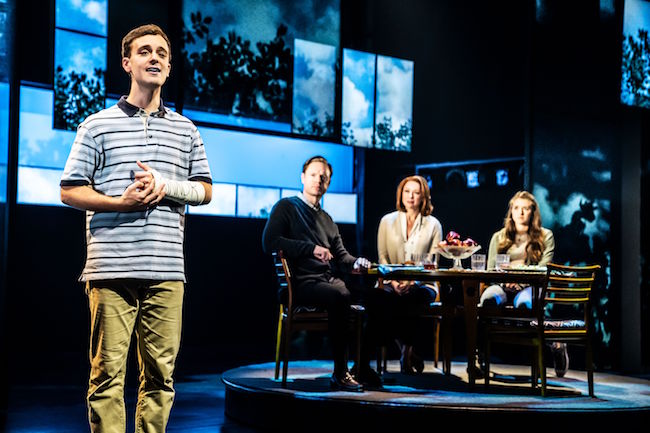 ‘Dear Evan Hansen’ captivates and compels with a realistic punch

According to a recent NPR story on a university study, suicide is the second leading cause of death for teens age 12 to 18. This alarming news is accompanied by higher levels of depression, anxiety and other mental health concerns among teens and young adults, all of which are higher still among young people of color. “Dear Evan Hansen,” presented at the Fabulous Fox Theatre, thoughtfully and poignantly tackles this issue in an emotionally evocative musical with a surprisingly well developed, and at times painfully nuanced, dramatic arc.

Evan is entering his senior year without close friends or much hope, and a struggling but caring mom. A suggestion by his therapist to write letters to himself leads to an unfortunate misunderstanding by the parents of another student, Connor Murphy, a young man who recently committed suicide. Evan, filled with conflicting emotions and good intentions, tries to provide comfort to the family, creating an imaginary friendship with Connor. Naturally, his little white lie spins out of control, becoming something much bigger than he ever imagined. The show refuses to shy away from difficult subjects, balancing humor and stark reality as the ultimately hopeful story reveals its complexities.

Stephen Christopher Anthony is believably awkward and uncertain, and he wears Evan’s insecurities on his sleeve in a profoundly sympathetic performance. Though his notes are always on key, his voice occasionally cracks with realistic confusion and his vulnerability is visceral and deep. Alessandro Constantini, Ciara Alyse Harris, Noah Kieserman and Stephanie La Rochelle are equally compelling as his classmates, secret crush and friendly acquaintances, while Jessica E. Sherman, Claire Rankin and John Hemphill provide the adult, parental perspective. The performances are connected through natural failings and inconsistencies, amplified by the pain of being a teen who doesn’t seem to fit in with the world.

Though they serve the exposition, the songs excel at providing the emotional context of the show, and from “For Forever” to “Sincerely Me” to “Disappear,” the show delivers a satisfying roller coaster of changing emotions and choices countered by compelling, unexpectedly hopeful drama. “You Will Be Found” is poignant and anthemic and “Words Fail” tells a powerful story that’s intimate while broadly relatable.

The impressive set – digital screens filled with social media interactions and messaging – adds to the tension while providing an intriguing, and sometimes almost overwhelming, sub-context to the action on stage. The show is exceptionally well integrated allowing multiple character stories to reveal and resolve while focusing on Evan. There’s genuine moments of tension relieving humor, some may be self-consciously so, but the show is gentle and loving, if sometimes hesitant, in its response. It feels inherently human, flawed ad kind, cruel and blissfully aware.

"Dear Evan Hansen," which closed November 3, is not always easy to watch, and a stash of tissues is recommended. The moving musical drama tells a story that’s authentically derived, and teeming with contemporary struggles that are difficult to solve. Somehow, the show glimmers with signs of hope that may leave you smiling through your tears.

The touring production is part of a strong line up of shows at the Fabulous Fox Theatre, which welcomes the returns of “Wicked,” opening December 4, and “Hamilton,” in May 2020, as well as “The Hip Hop Nutcracker,” “Donna Summer the Musical,” and a variety of musical and dance performances.