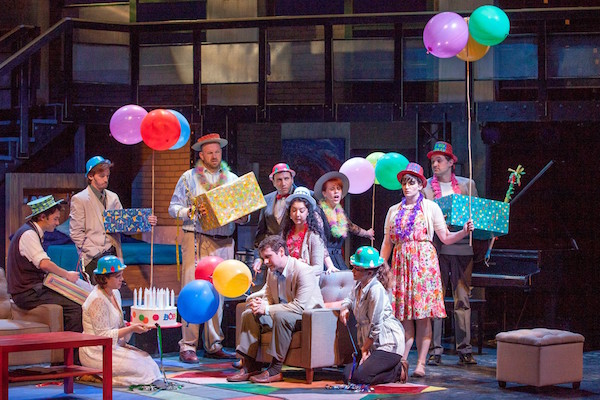 Love, marriage, and friendship get the Sondheim treatment in pleasant 'Company'

Insight Theatre Company's production of Stephen Sondheim's Company is a thoroughly enjoyable production that genuinely tries to meet the demanding standards and vocal calisthenics required by its composer. The cast is uniformly talented and clearly connects with the show, but, though the effort and an appealing ensemble are present, the production doesn't quite reach its lofty goal.

Robert, or Bobby, is about to turn thirty-five. He's single, living in a very nice apartment and apparently doing well, both in business and his personal affairs. To this point, Bobby has spent his free time juggling multiple girlfriends and avoiding thoughts of settling down and starting a family, even as friend after friend try to fix him up with "nice girls." Now that his closest friends are all married, several of them with children, and as he considers his momentous birthday, Bobby begins to question his place in life and his future.

During the show, we meet Bobby's closest, married friends and three of the women he's dating. We watch as Bobby spends his time dating, being the third wheel with his coupled friends, and imagining how his surprise birthday party, the one he's not supposed to know about, will go. Several themes recur time and again and all are centered on Bobby, his choices, lifestyle, romantic partners, and most importantly, his lack of a wedding ring.

Martin Fox is appealing as Bobby, and while his voice isn't quite up to the task on every song or bridge, he is reliably solid. As importantly, he successfully conveys the character's emotion and conflict, and we clearly see his challenges, questions and movement forward. In this reviewer's opinion, the acting is in fact a strong point of the show. All the scenes are emotionally grounded and each character's intention and reactions is clear, a credit to the cast and director Doug Finlayson.

Bobby's coupled friends include Phil Leveling and Meghan Baker as the congenially pushy Harry and Sarah. The two are struggling to control their own flaws and less than successful at hiding it from each other but still happily together. Jonathan Hey and Cherlynn Alvarez as David and Jenny, the two have a strong connection and are very caring. Exuding warmth and a congenial nature, they seem to represent the almost too perfect couple.

Cole Gutmann and Taylor Pietz, as Peter and Susan, and Michael Brightman and Laurie McConnell, as Larry and Joanne represent the other side of the coin. These long married couples are comfortable enough with each other, and Bobby, to share their frustrations and problems, though it doesn't seem to diminish either couple's affection. Finally, Matt Pentecost and Stephanie Long are Paul and Amy, a coupling that feels somewhat newer and still more eager to please than the others; though part of that may be due to Long's cheerful, over-helpful personality and her protective feelings for Bobby.

Bailey Reeves, as April the flight attendant, Melissa Garth, as girl next door Kathy, and Samantha Irene as the wildly free spirited Marta, round out the cast. The girlfriends feel particularly stereotyped and surprisingly dated, but Reeves, Garth, and Irene capture the distinct personalities and preferences of each with clarity and occasional humor. Finlayson ensures that each character is defined, and the action intentional and driven by the show, moving the show along with only occasional lulls in the story.

When the songs work, they're often quite stirring, with lovely harmonies and intonation that accents the interpretation. Unfortunately, those songs are outnumbered by ones with missed notes, poor timing and awkward dancing. A few of the solos simply fall flat, and at times one or two voices clearly miss their notes in the ensemble numbers. Among the numbers, I particularly enjoyed "Sorry-Grateful," "Someone Is Waiting," "Getting Married today," Side by Side by Side," and "Barcelona," and title number Company has a nice build, with interesting layered harmonies that really set the tone of the show.

Even with the flaws, I found Company, running through July 3, 2016 at Insight Theatre Company, to be an enjoyable, though not spectacular, show. It's also an easy-to-follow introduction to the work of Sondheim that may leave you both humming and smiling long after the final curtain.