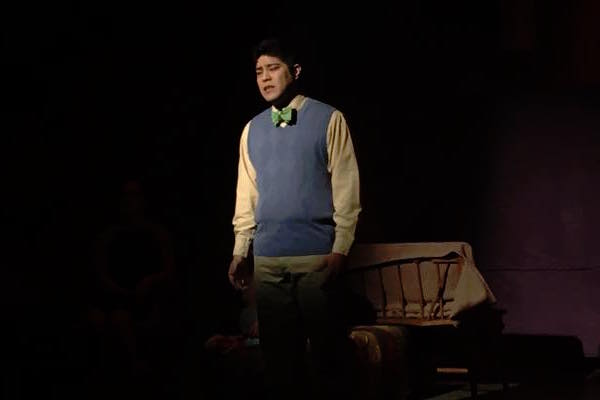 'Helvetica' gives the story of life and death a gentler, kindler narration

One admirable quality of young children and sentient teddy bears is the ability to accept things at face value first, and then ask questions. While this approach lends itself towards confusion and tension around the grayer shades of life, it can also bring fresh perspective and unexpected clarity.

Such is the story of Helvetica, a woman born to kind, nurturing parents whose past, present, and future self are introduced to us by Myron, her faithful and adventurous teddy bear companion. Helvetica should have had a charmed childhood, but her mother took her own life when Helvetica was young and she was left with faint memories and a patient father. Helvetica and her parents expressed themselves in stories, leading to the present and future Helvetica's career as a beloved children's author.

Or at least, we presume that's how Helvetica and her parents talked, as this is a memory play and a time-traveling teddy bear with the inquisitive nature of a bright child is our guide. Luckily for us, the device works well and the play is largely successful: a gentle romp through the life of a woman who found much success in the stories she told, even when her own life did not paint so rosy a picture. Death, loneliness and separation are recurrent themes in the story, but they are not given a heavy hand. They're woven in between flights of fancy and memories revisited in lingering detail.

Frankly, I can't recall a teddy bear speaking with such a guileless philosophical bent since a certain Pooh bear and I like the approach. Myron doesn't dig too deeply at the why, but wonders about how it feels and what happens next. These are the same questions a young child might ask when faced with divorce, loss, suicide, and mortality. Kelvin Urday turns in perhaps his strongest performance to date as the stuffed sage, and his cheerful nature and costume reinforce his central characteristics.

Urday finds his balance in an insightfully child-like interpretation, never becoming too cloy or veering into childish or caricature. Julianne King and Andrew Rea turn in solid performances as the mother and father, as well as a number of other supporting roles. Her mother is tender and sad, and her father, in particular, is endearingly kindhearted. There's also nice tension between Helvetica and her husband, Maurice Walters II.

The children's stories Helvetica writes reveal sparkling bits of familiar detail, and show Helvetica weaving her experiences and make-believe play into her life's passion. These stories are worthy of expansion, but Urday's Myron sprinkles them throughout the narrative like little gifts, pausing just a moment to ensure we recognize the significance. The timing and touch are light, slight, but present just long enough to punctuate the moment.

As the teddy bear's life long best friend, Urday is complemented by Ahsley Netzhammer, Katie Palazzola, and Michelle Dillard as Helvetica Past, Helvetica Present, and Helvetica Future, respectively. Though the three do not resemble each other, they achieve similarity in movement and expression at times, with natural variance as accords each age. Director Brittanie Gunn and the actors are to be credited for the connection they have, although attention to detail could be pushed further. The show would benefit with more emotional, physical, and visual connection between the three; while each actress is individually compelling and complete, they do not quite read as the same character.

Urday must also be careful he doesn't get too cute as the run continues, adhering to the restraint he maintained, with a few exceptions, on opening night. Additionally, a little editing may tighten the script and keep the story focused. One scene in particular, during which time Myron was hidden away in the attic, felt unnecessary in the retelling of Helvetica's story, though it was nice to see her and her dad together in her adulthood. On a more positive note, I appreciate the technical improvement the company is showing, the lights and sound were welcome elements that added to this production.

Helvetica, running through Sunday, April 10 at Tesseract Theatre, is a sweetly whimsical memory play. It could be a play about anyone's life, but it is a story about an imaginative girl who maintained her sense of wonder and possibility throughout a long, interesting life. Perhaps, it is also the story of the clever teddy bear who helped her find, and keep, and then discover again, the joy of her own imagination.