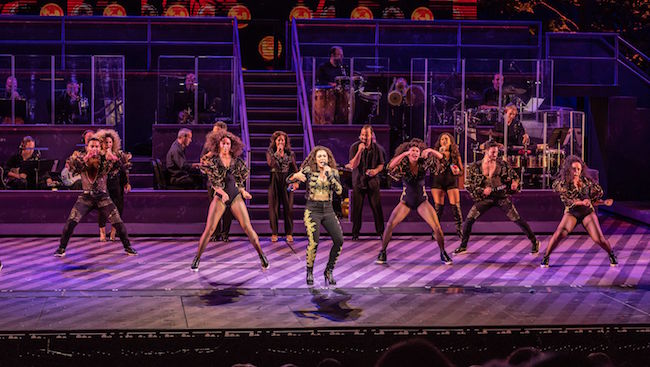 The jukebox musical, “On Your Feet, the Story of Emilio & Gloria Estefan” tells the history of the famed Miami Sound Machine. The infectious musical may just be the perfect way to get Muny audiences clapping, shaking and dancing in their seats. The current production, exuberant with joy and Latin rhythms, is a sizzling addition to hot summer nights in St. Louis.

More than just a revue, the show is a story of lasting love and perseverance. The love of family and culture, the love between a couple or a parent and child, the love a person has for the music that moves them. And the perseverance it takes to sustain love, and to recover when life sets you back. In addition to the more personal themes, the uplifting show celebrates the possibilities and diversity of the United States, staying positive without overly sugarcoating reality.

The young Gloria Estefan loved to sing and dance, and everyone responded to her talents. Even the other soldiers stationed with her father in Vietnam, a world away from the family’s Cuban-influenced Miami neighborhood. As she matured into a young woman, Gloria set those dreams aside to help her mother care for her ailing father, grandmother and younger sister.

Her grandmother, Consuelo, sees that Gloria is happiest when she’s singing and writing music. Without telling her parents, Consuelo arranges for Gloria to meet a locally successful musician, and the leader of the Miami Latin Boys, Emilio Estefan. The rest is history, as they say. Within a few short years, the band pushed Gloria to the front, changed their name and blew up as the first Latin dance band to cross-over to the pop charts with English language hits.

As with the band, the success of “On Your Feet” is largely dependent on Gloria and the audience’s reaction to her. Arianna Rosario is captivating as the legendary pop diva. Effortlessly reaching the high notes, she’s also impressive with the quick lyrical runs and precise footwork. The transition from “Anything for You,” a sweet duet with Cristina Sastre, as sister Rebecca, to the full band, high energy hit “1-2-3” is the first taste of the musical interplay that guides and enhances the production. Rosario is also well paired with Omar Lopez-Cepero as Emilio Estefan and Natascia Diaz as Gloria Fajardo, her mother. Though very different in its expression, the actors create believable chemistry and emotional depth between these three pivotal characters.

But Rosario is not the first Gloria Estefan who captures our attention and hearts. That distinction goes to Isabella Iannelli, as young Gloria. From the tender opening scene when she’s recording a song and message on a cassette to send to her dad to her seamless transition to Rosario, Iannelli infuses young Gloria with spirit and grace. Alma Cuervo brings the delightfully supportive Consuelo to life with generosity and warmth, and Martín Solá, Jordan Vergara, Gabriel A. Reyes, Ryan Alvarado, Henry Julián Gendron, Natalia Nieves-Melchor and Ruben Flores turn in memorable support.

The focus is naturally on the music, and a brief solo quickly kicks into the energetic, crowd-pleasing “Rhythm Is Gonna Get You.” In the moment, I wished that overture lasted a little longer. As it turns out, the mix of up tempo dance tunes and heartfelt songs is well balanced and the pace crisp. Musically, the ending selections, from the gospel influenced “Reach” to the emotional build of “Coming Out of the Dark” and exhilaration of “Megamix,” practically guarantees the audience leaves the show with a song in their ears and a little more rhythm in their step.

The storytelling here is interesting and emotionally resonant as well, giving the show a satisfying arc and contextual flow. Gloria’s struggles with being in the spotlight, her disagreements with her mother and, particularly, her return to the stage after a horrific bus crash nearly paralyzed her are riveting. These scenes are punctuated by ballads and tender love songs embellished with touches of Cuban folk music. Stand outs include “When Someone Comes Into Your Life” featuring Rosario and Solá, Diaz and Lopez-Cepero’s haunting “If I Never Got to Tell You,” and “Don’t Wanna Lose You,” also song featuring Lopez-Cepero, with Rosario joining in. The songs are well integrated with the plot, ensuring the big numbers are that much more exciting and cathartic.

The Muny’s production of “On Your Feet,” continuing through August 27, is fun, family friendly entertainment with a surprisingly satisfying story arc. The upbeat jukebox musical celebrates the success of the Miami Sound Machine and Emilio and Gloria Estefan’s commitment to their family, music and culture. If nothing else, the catchy, danceable songs and heartwarming story prove that Gloria is right, “the rhythm is gonna get you.”