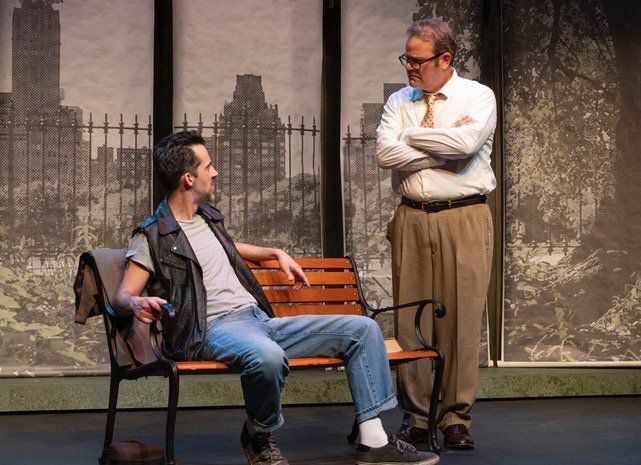 As summer shifts to falls and barbeque turns to backyard fires and spooky stories, St. Louis Actors’ Studio offers up a pair of darkly comic, twisted tales for our entertainment.

“The Zoo Story,” by Edward Albee and “The Dumb Waiter,” by Harold Pinter are short, two-character plays that offer plenty of laughs, even as the characters flirt with life and death. In both plays, one character unwittingly becomes part of a homicide; but the twists, turns and reasons that bring them to this point couldn’t be more different. The double-billed production, directed by Wayne Solomon and starring William Roth and Joel Moses, is thoroughly entertaining if a bit grim.

Albee’s “The Zoo Story” is a tale of a chance meeting between two strangers from very different backgrounds, with an ending that you’ll think you should’ve seen coming. Roth’s Peter is sitting quietly on a bench in Central Park, reading the paper. Moses, as Jerry, bursts in, apparently from nowhere, instantly striking up a conversation. Jerry is a frenetic mix of rambling stories, intimate confessions and veiled threats, but Peter is determined to keep his calm. Eventually, Jerry pushes the wrong button and gets the angry reply he needs to justify his next move.

The pace and intensity builds quickly and steadily during the short play. Jerry’s constant chatter and quick, sharp movements are only emphasized by the occasional menacing looks he casts on Peter. Moses and Roth are contrasts in every way, down to their costumes, designed by Teresa Doggett, which subtly emphasize class and economic stature. Even Roth’s position at open is one of territorial comfort, establishing Moses as the “outsider.” Albee’s dense script is layered with context and the production shows the same attention to detail.

Pinter’s “The Dumb Waiter,” is a story about two hit men waiting for their next assignment to arrive. The two sit in a dingy room in the basement of a former hotel, Roth’s Ben contentedly reading a newspaper, Moses’ Gus less patient and less interested in the news, and wanting a cup of tea. Gus talks almost continuously, frequently with a slight complaint to his commentary. Ben tolerates him. Suddenly, the dumb waiter in the room springs to life, the men scramble to respond and then, in a twist that’s been building, the mark rather unknowingly arrives.

The pace of this short play is a bit more languid, and the tension ebbs and flows, in part triggered by the sudden use of the dumbwaiter. Pinter’s script purposefully leads the audience in several directions, there’s a lot of focus on tea and food interwoven with the primary plot. The effect lulls the audience into thinking this is going to be a light piece, about two disparate but chummy hit men, before delivering a final surprising twist.

As usual with the small, tightly knit production team, Patrick Huber’s set and lighting design create effective and efficient settings for each show. The panels depicting Central Park circa 1959 immediately establish location and enable a very quick set change between acts. As a final touch, the company’s sound design mixes classic rock and jazz to set the mood before the show and during intermission.

Roth’s taciturn demeanor serves both his characters well, but the two men are not mirrors of each other. There’s a refinement to Peter’s character that Ben would scoff at. Similarly, Jerry and Gus are both energetic, nervous types, but with very different motivations and depth. Solomon and the actors show us commonalities without ever seeming the same. The performances are smart, subtle and believable, even if the situations lean to the absurd.

Albee and Pinter are widely acknowledged as among the best playwrights of the 20th century, and the two short plays are a brilliantly matched pair. The resulting production of “The Zoo Story” and “The Dumb Waiter,” continuing through October 3, is an enjoyable, somewhat modernly macabre set of stories perfect for darker, chillier nights.