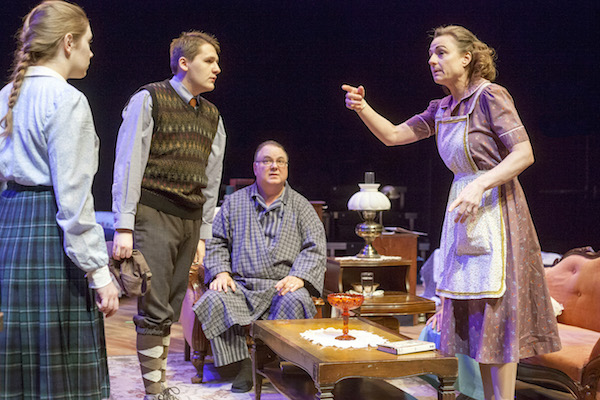 Nostalgic and heart warming, 'Brighton Beach Memoirs' is a lovely ode to growing up

Neil Simon's semi-autobiographical Brighton Beach Memoirs is the first of three plays that tell the story of Eugene Jerome, a baseball loving New Yorker who wants to be a writer, if he doesn't get signed by the Yankees first. He's also going through puberty and dealing with an onslaught of unfamiliar feelings and sexual urges. Act Inc. gets the details right, and delivers them with familial warmth and optimism in a memorable production filled with strong performances.

Set in 1937, the show is a nostalgia-filled coming-of-age tale and a tribute to family unity that doesn't shy away from the harsh realities of life. Eugene, his father, mother, and brother have taken in Eugene's widowed aunt and her two daughters. Because the family is not wealthy, his father works two jobs and, though they still struggle to put food on the table, they make do.

Eugene's older brother Stanley is having troubles at work, losing money, and considering joining the army. His cousin Nora wants to drop out of high school to audition for a Broadway show, and, much to the consternation of Eugene's mother, his aunt is considering dating an Irish Catholic. After all this stress, Eugene's father suffers a heart attack and the family's sense of security is put to the test.

Zac O'Keefe is thoroughly engaging as Eugene, his monologues are filled with hope, humor and ever-changing moods, but delivered with a light, humorous touch. Eugene is filled with optimism, but also a growing understanding of the challenges and stress of growing up. Through the course of the play, O'Keefe adroitly handles the character's many mood swings and realizations with clearly motivated reactions.

Kimberly Sansone radiates with warmth, caring, and a sharp wit as Eugene's mother Kate. She's at times quick to judge others, but fiercely protective of her family, particularly her sister Blanche, a wonderful turn by Susan Kopp. Chuck Brinkley shows the wisdom of Solomon and patience of Job as the hard-working father, and Evan Fornachon gives Stanley a sympathetic voice and appealing personality, while Natalie Krivokuca, as the rebellious Nora, and Mary Pat Dailey, as the bookish Laurie, are charming and engaging.

The characters in Brighton Beach Memoirs, are filled with depth and human conflict while remaining memorably distinct. Director Emily Jones guides the cast with a clear sense of the story arc and necessary motivation, keeping the show moving at a crisp pace and developing a natural ebb and flow that complements Simon's delightful script.

Family relationships are explored honestly and thoughtfully, reflecting real life -- we don't always like our family, but we love and support them as best we can. The efficient stage, coordinated by Jason Flannery, is a bit crowded, enabling us to see into the family's apartment in a way that underscores the tension likely to arise when so many people live in a small space. Wesley Jenkins' costumes and Flannery's properties reflect the period and the family's financial situation in an understated fashion. Moments are emphasized by the lighting and sound design by Michael and Zoe Sullivan, respectively. These small touches help bridge any gaps between the audience and the family, an important consideration in a story set before most audience members were born.

Simon's powerful coming-of-age trilogy, though set in a different era, explores themes that resonate deeply with contemporary audiences. Growing up presents universal questions and personal challenges and the cast taps into this commonality with great success.

We see the Stress in Brinkley's face, hear the concern and mothering in Sansone's voice, understand Fornachon's stubborn pride, and feel sympathy for Kopp and her daughters. Most importantly, we gladly follow O'Keefe and share in the joys and disappointments as his character humorously navigates puberty while dreaming of a glorious future.

As much as this is a story about Eugene, Simon's play is also a warm tribute to family, and the strength and values we learn from those closest to our hearts. The result is an authentically warm and engaging production that's filled with genuine affection. Brighton Beach Memoirs running through June 26, 2016 at Act Inc.