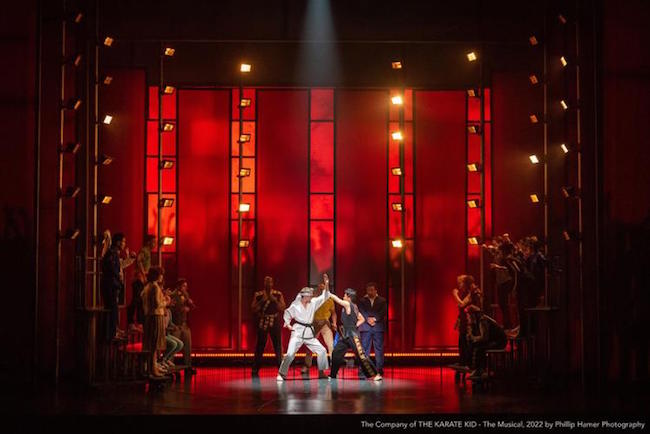 From screen to stage, ‘The Karate Kid the musical’ is family friendly, feel good fun

Whether you’ve secretly dreamed of studying under Mr. Miyagi since you were a kid or just learned about Cobra Kai during a pandemic binge, there’s plenty to like in “The Karate Kid the musical.” While not groundbreaking, the family friendly show is entertaining with an uplifting story arc.

The much anticipated world premiere musical is based on the popular movie franchise “The Karate Kid,” created by Robert Mark Kamen, who also wrote the book for the musical, with music an lyrics by Drew Gasparini. The energetic and somewhat nostalgic show kicks off STAGES St. Louis summer season as part of its pre-Broadway run. While fans of the original movie or the popular series “Cobra Kai” are likely to appreciate the musical the most, you don’t need to be familiar with either to follow the show or to enjoy the positive messages and upbeat songs.

Daniel LaRusso and his mother Lucille have recently arrived in southern California looking for a fresh start. Well, his mother is looking for a fresh start. Daniel would rather be back “home,” finishing his high school years in a familiar spot. Still, he’s a good kid and promises his mom he’ll do his best to adjust. Daniel quickly makes a friend in Freddie Fernandez and meets and develops an instant crush on Ali Mills, the popular girl at his new school. Unfortunately, things take a turn for the worst when local karate champ and school bully Johnny notices Daniel’s interest in his ex-girlfriend.

Luckily, apartment handyman (and karate expert) Mr. Miyagi has Daniel’s back. After coming to Daniel’s assistance late one night, Mr. Miyagi soon becomes a close friend and important teacher to the young man. The musical, much like the movie itself, succeeds best when focusing on this relationship, with the scenes involving the Cobra Kai karate school adding to the action and fun while providing dramatic tension.

John Cardoza is sincere and believably ambivalent as Daniel, a kid with a great singing voice and a good heart, but not much depth. He’s young and still has a lot to learn. Kate Baldwin is an expressive vocal stand out as Lucille, Daniel’s mom. She brings a lot of warmth and a bit of personality to a standard character role though her significant talents feel underused here. As Mr. Miyagi, Jovanni Sy naturally integrates and effectively delivers important touches of understated humor and reserved affection that are the hallmarks to the beloved character.

Luis-Pablo Garcia, Jetta Juriansz and Jake Bentley Young turn in strong work in support as Daniel’s friends and rival. Additionally, the actors look reasonably close to high school age, which helps audience engagement. As John Kreese the operator of Cobra Kai, Alan H. Green is formidable, with a tough exterior and broken interior that make the character so compelling to watch.

The songs are well written and delivered with precision by conductor Andrew Resnick and the orchestra, with music preparation by Russell Bartmus. The numbers include a few solid hooks, notably “Square One,” “Strike First, Strike Hard, No Mercy” and “Stronger Than Before,” with an anthem-like crescendo that ends the show with an optimistic flourish. Slower, more meditative songs, particularly “Slow Song,” “Doing Something Right” and “Kiyoko, My Love,” linger. There are a few others that deliver nice contextual lessons, including “Balance” and “If I Could Take His Pain Away,” which benefits from Baldwin’s tender interpretation.

The scenic design, by Derek McLane, shifts from working class southern California to a beautiful homage to Asian design, with sliding panels, muted natural colors and Bonsai. The costumes by Ayako Maeda also reflect both halves of the show’s aesthetic, as does the complimentary sound design by Kai Harrada. The other technical elements help to set the mood and tone, effectively creating the world around the story.

The choreography, by Keone and Mari Madrid and associate choreographer Vinh Nguyen is excellently conceived and executed, often eliciting appreciative murmurs from the audience. There are, however, two distinct sets of choreography, one centered on the action and storytelling and the other on creating beautiful poses and flowing transitions. Both are well integrated into the production although the moves don’t always feel aligned with or an enhancement to the story.

Similarly, director Amon Miyamoto successfully delivers a vision for the look and emotional context of the show and an entertaining coming-of-age musical. Daniel’s struggles at his new school and Mr. Miyagi’s friendship are the most effective elements of the story, and the fights and training at the karate school are the most interesting and engaging scenes. Faithful to the story arc, if not a scene-by-scene re-creation, “The Karate Kid,” continuing through June 26 is a solid start to a feel-good, nostalgic musical hit that feels a little long and not quite set. All the parts work, better integration into a tightened script more focused on delivering the story will help them work together.