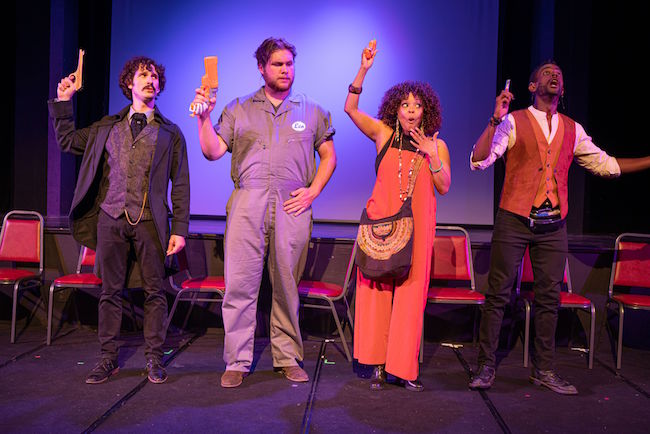 Fly North Theatricals returns to the stage with a thought-provoking and compelling production of “Assassins,” Stephen Sondheim and John Weidman’s darkly comic musical twist on the American Dream. Fresh staging and an exceptional cast add currency and context, ensuring the show reverberates with a sense of urgency appropriate to contemporary politics.

The staging sets the musical at a panel during PresCon, which feels a lot like a party convention, just without the candidates. The Proprietor welcomes the audience to the event, and then kicks things off with a loose introduction of our panelists. Each of who attempted to assassinate a U.S. president; several of whom succeeded.  John Wilkes Booth, the O.G. himself, is brought on last, to enthusiastic applause from the rest of the panel who stand pretty much in awe. If the Proprietor is somehow in charge of this event, then Booth is most certainly her muse.

The ever-present Balladeer is the counterpoint to the panel and plausibly a member of the audience, like the rest of us. Raised in the age of computers and smart phones, he shares his screen with us via projection, providing background on each of the assassins as their story unfolds. The approach adds depth and context in illuminating snippets, supporting to the plot without becoming a distraction.

When he finally takes action, the Balladeer transforms into the most infamous assassin of all. But if The Balladeer carries our voice on the stage, what does his transformation say about us? Effectively framed, director and conductor Colin Healey sharpens the implicit paradigm to a fine point.

Eileen Engel, as The Proprietor, Jordan Wolk as John Wilkes Booth and Stephen Henley as The Balladeer, are the centerpieces and carry the show with strong voices and commitment. Engel and Henley are particularly expressive at key moments, telegraphing sub-context and emotion. Wolk speaks with a slow drawl and sentiments that reflect a different age. His views are clear and his conviction apparent with every forceful tone and scowling glance. Vocally, the three show the necessary range and control for Sondheim. They convey a firm interpretive grasp of each song’s intentions, and find a balance that works well in the often-difficult acoustics of the theater.

Director Colin Healy’s inventive staging takes places the characters into the more contemporarily familiar setting of a panel discussion, making individual characterization all the more important to the story telling. The approach fits in well with today’s political arena, where rallies, campaigns and debates never end.  Thankfully, the entire ensemble fully commits to the framing. The cast interacts and reacts in a relaxed, and sometimes strikingly conversational way that makes the moments each pulls a trigger unexpected even as we see it unfold.

Technically speaking, the company minimizes the limitations of the theater space. While there’s not a formal set, per se, the space is successfully transformed into a meeting room at a political convention, complete with wall banners, pithy slogans, a plainclothes security detail and nametags on lanyards. Tony Anselmo’s lighting is unobtrusive and complimentary. The choice to slowly bring down the house lights during the opening number is a particularly inspired touch. Eileen Engels costumes are smartly designed to reinforce character identity and Bradley Rohlf’s projections and Healy’s sound effects add the finishing touches.

Musically speaking, Sondheim isn’t afraid to challenge a singer and this musical is no exception. The leads are outstanding and Kidd’s unmistakable soprano and Borwick’s surprisingly buttery baritone lead the ensemble harmonies. Audience members who arrive early enough will want to take in the displays around the theater that provide additional history and context and should also note that the show includes racial slurs and simulated gunshots that may trigger some. Highly effective and resonant with political currency, “Assassins,” continuing through July 17, is a stirring musical that’s perfect for our times.