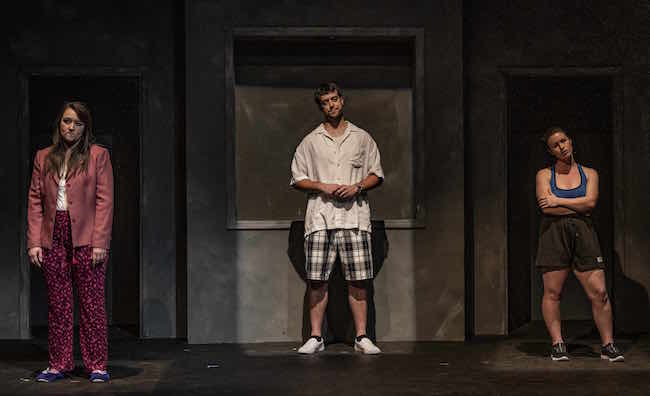 Set 1 features five short plays anchored by playwright Neil LaBute’s “St. Louis.” The other shows in the first set include “What Else is New,” by Aren Haun; “Twilight Time,” by John Doble; “Funny Thing,” by Willie Johnson; and “Time Warp” by Fran Dorf. For this reviewer, the concept of time plays an important, at times pivotal, role in each of the shows.

Although it is more apparent in some scripts, each show evokes thoughts about the concept of time – do we have enough time? How do we feel as our time is dwindling? Did we spend out time wisely? The though shows are quite different in tone and subject matter, the idea of time, and how we perceive time, lingered in my mind long past the curtain.

As is the nature of small cast shows, relationships are also key to each story, whether it's strangers who find unexpected compassion or lovers, ex-lovers and would be lovers looking to understand. Most of the characters are seeking time, of some fashion, to heal the scars of relationships from the past that won’t allow them to move forward.

“In What Else is New,” Henry-Eagles is Mark, a bored worker in a slow diner trying his best to mostly ignore Bruno, the customer who just walked in, rolling a suitcase containing all his belongings. Bruno is a persistent talker, much to Eric’s dismay. He interacts with the man as minimally as possible, but can’t completely disregard him. What if Bruno is dangerous? There are enough questionable declarations and odd twitches in Dean’s portrayal to suggest something is amiss. Eventually, the worker lets down his guard, listens to the man’s story, and the two make a human connection.

“Twilight Story” introduces us to two strangers, Benjamin and Geraldine, who meet by chance at a park bench and turn out to have a lot more in common than either first expected. As Geraldine, McLaughlin gamely tries to engage with Huber’s more reticent Benjamin. When he exasperatedly tells her why he’s sitting alone on the bench, she responds with unexpected acceptance and honesty. The nicely controlled characterizations run the gamut of emotions, grounded in a mix of hesitance and awkward recognition. Playwright Doble carefully walks the meet cute balance, creating space for an authentically charming piece that subtly emphasizes that self-harm is a serious contemporary issue. The show includes frank talk about suicidal ideation that’s softened by both humor and connection.

“Funny Thing” is a poignant dissection of a relationship, from its first sparks to eventual end, told in a series of events that flit between the past and present. As the Older Man, Drew Patterson is pensive, conservative in speech and action, but burning with passion and a desire for a real connection. Henry-Eagles, as the Young Man, is at a different stage in life, presumably he’s still exploring who he wants to grow into. The story of their relationship is told primarily from the Older Man’s perspective; he’s trying to figure out what happened. Patterson and Henry-Eagles create a nice sense of chemistry and fluidly move between time and emotional extremes in the quick moving, circular tale.

“Time Warp” is the story of a shop where time and reality meld together to help people come to terms with their past so they can move forward with what’s next. The plot gets a bit confusing in this one, but the emotional catharsis is pleasing. Henry-Eagles, the shopkeeper, welcomes Dean’s Brian and Uding’s Beth to the shop. The shopkeeper tries to explain that this is not an ordinary antiques shop. Brian and Beth don’t understand until they both recognize the same painting for very different reasons. Huber is also featured as the painter and there’s an interconnected story among the three shop visitors.

The final short of the program is LaBute’s “St. Louis,” a reflection on a messy love triangle set in St. Louis. A story like this could be set in any town; it resonates as authentic and keeps the focus moving towards the new reality for the couple at its center.

Russell’s Him meets Uding’s Her and McLaughlin’s She when he moves into a unit in the apartment building where they live. She informs us that they are a committed couple. In it for the long haul even though they have struggles like any couple. Her lets us know that they were recently talking about starting a family and that she had noticed Him. Him and Her meet officially when he helps Her bring in the groceries. She gets a great gig at a Shakespeare festival across country for a few months. He namedrops well-known works of lesbian theater and movies. Her stays in St. Louis and gets to know Him better. She’s not super happy about it, but, you know.

The play is much more tell than show and structured like some sort of interview or interrogation, though the what and why are not immediately clear. There’s an unseen twist near the end that acts as a deus ex machina to tidy things up. The script aligns well with the others selected for part 1 of the festival. There’s a singular strength in that each offers interesting character studies that keep the audience’s interest. The common weakness is that none of the stories feel quite complete.

The plays are interesting, the direction is clear and focused and the performances engaging. Though no single play in set 1 struck me as exceptional, each is an enjoyable vignette featuring genuinely interesting characters and watchable, entertaining performances. The LaBute New Theatre Festival continues through July 31, with set one concluding July 17.